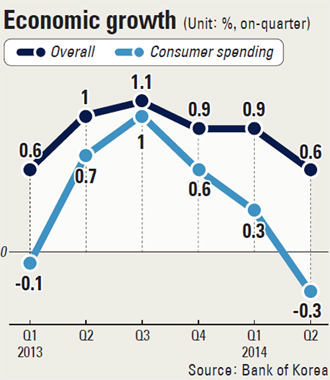 The Ministry of Strategy and Finance said the package is made up of largely three parts: expansionary fiscal measures, relaxed loan-to-value (LTV) and debt-to-income (DTI) ratios, and a plan to increase household incomes. The package comes just a week after Choi took office.

Dubbed “Choinomics,” the minister’s stimulus package is compared to Japan’s Abenomics. Choi has emphasized that failure to emerge from the current economic situation might send Korea on a path similar to Japan’s two lost decades.

“The government plans to use expansionary measures until the economy shows clear signs of recovery,” Choi said at a press conference yesterday in Sejong. “The government will seek bold and aggressive measures that can directly deal with problems of the economy.”

The main thrust of Choinomics is an additional 11.7 trillion won worth of fiscal support and 29 trillion won worth of policy support using funds from the Bank of Korea and state-run institutions for the rest of this year. The plan avoids the use of a supplementary budget, which would require National Assembly approval.

The 11.7 trillion won additional fiscal support measures represent 0.8 percent of GDP and are expected to boost GDP growth by 0.1 percentage point this year and in 2015, according to the ministry.

Last year, the government created a 17 trillion won supplementary budget, but only 5 trillion won went to help the working class and small businesses. Compared to that, the ministry believes the latest fiscal measures will be more effective.

“Last year’s supplementary budget was purely for boosting the market and accounted for a mere 0.5 percent of the GDP,” said Kim Chul-joo, director general of economic policy at the ministry. “Now we are pouring in more than double the fiscal sources, so we believe they will have a greater impact.”

Most of the fiscal plan will focus on helping consumers purchase homes and supporting small businesses.

The money will come mostly from the National Housing Fund and Korea Credit Guarantee Fund.

The 29 trillion won financial support will include increased loans and loan guarantees for small businesses and funds to support economic policies.

The three state-run banks - Korea Development Bank, Industrial Bank of Korea and Export-Import Bank of Korea - will be told to expand their initial financial provision plans by 10 trillion won to 191.9 trillion won.

Choi also said the ministry will draft a larger government budget for next year to shore up expansionary policy.

Meanwhile, the nation saw its worst quarterly growth in nearly two years from April through June, the Bank of Korea reported yesterday.

The disappointing April-June growth was largely caused by a contraction in consumer spending.

Exports in the second quarter posted steady growth, adding 1.9 percent compared to the first quarter despite the strengthening won against the U.S. dollar. It inched up from the 1.5 percent growth posted in the first three months of the year.

The BOK in its recent revised outlook projected that the economy would see a 0.7 percent quarterly growth, which is 0.1 percentage point higher than yesterday’s figure.

“It was shown that the economic flow was much worse than what we expected earlier when we included data that weren’t available when we made the revised outlook earlier this month,” said Jung Yong-taek, head of the economic statistics department at the Bank of Korea.

Some market experts are optimistic that private-sector spending will improve starting this month, and such sentiments have also been pressuring the central bank governor to lower the key policy rate to inject liquidity into the market. 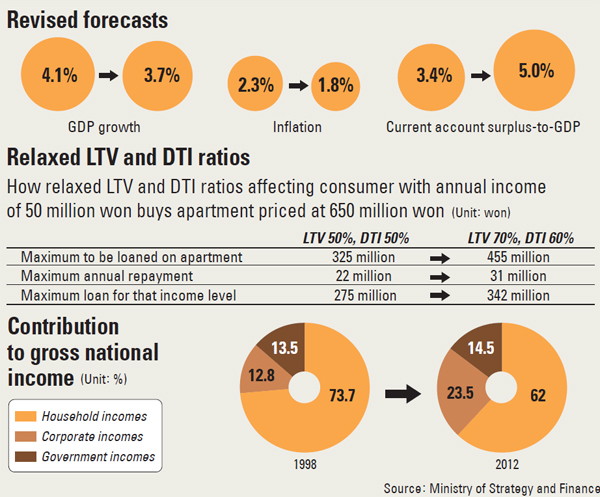 The LTV is a gauge used by banks to determine the amount of a home-backed loan based on the market value of the property. The rate varies by type of bank and city. The average has been 50 percent for Seoul and its metropolitan areas, and 60 percent in rural regions.

The DTI ratio determines the maximum loan a person can take out to buy a house based on annual income. It currently stands at 50 percent in Seoul, 60 percent for metropolitan areas in Gyeonggi and 40 percent for the districts of Seocho, Gangnam and Songpa, where speculation was rampant during the Roh Moo-hyun government.

If the ratios are raised, for example, a salaried employee earning 50 million won annually would qualify for a 426 million won mortgage on a 650 million won apartment in Seoul. Previously, he would get only 325 million won

A higher LTV ratio is expected to be useful for those with higher incomes. The government believes additional debt by such financially capable households is manageable.

Another key point of Choinomics is to encourage corporate earnings to flow into households, and the ministry introduced three tax incentives for the expansion of household income.

Under a draft plan, the government aims to give a 10 percent tax deduction for companies that show higher than average pay raises over three years. But the rate for conglomerates will be 5 percent. Earlier, Choi emphasized the focus of the plan is not to tax companies but to induce them to use surplus liquidity for employee wages or dividends to encourage households to spend.

The tax will take effect in two to three years to allow businesses to prepare. Businesses that once welcomed Choi’s nomination as economy chief are now disappointed by the minister’s idea of taxing corporate internal savings.

“The taxation should be reconsidered in a way that respects each company’s situation and autonomy,” said the Federation of Korean Industries in a statement released yesterday.

The government also will encourage working-class people with 70 million won in annual salaries or less and with no homes to build more assets for home purchases by expanding income tax deductions from the current 1.2 million won to 2.4 million won. Government-provided home mortgages will be expanded to include owners of one house. The government supplied a total of 5 trillion won worth of mortgages in the first half of the year and plans to provide 6 trillion won for the rest of the year.