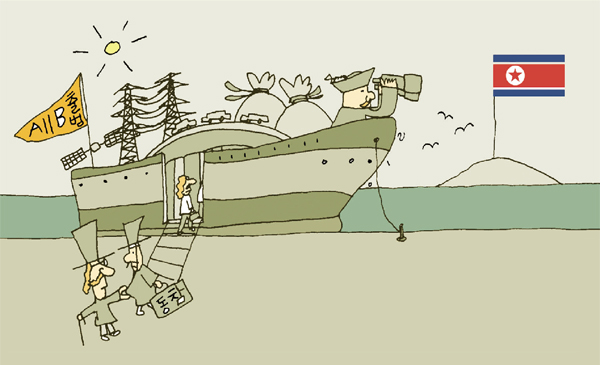 Nothing comes free. President Park Geun-hye’s tempting notion that unification will be “a jackpot” is no exception. There would be an enormous expense needed for new infrastructure in North Korea after unification. Will there be a way to reduce the tremendous amount of unification’s cost? We can follow the wisdom of ancient sages to find an answer.

The late former Prime Minister Nam Duck-woo provided a clever idea in 1990. He suggested spending other people’s money. Nam proposed to establish the Northeast Asian Development Bank to invest in infrastructure in North Korea with foreign capital. Twenty years later, President Park made her proposal in a speech in Dresden in March, a proposal that has its basis in Nam’s idea.

China, in the meantime, has asked Korea to participate in its proposed Asian Infrastructure Investment Bank and a debate has flared. It is a regional development bank proposed by China to be opened next year. China originally proposed investing $50 billion, but it recently increased the amount to $100 billion.

The blueprint of this bank is very similar to the Northeast Asian Development Bank proposed by Nam. If the plan materialized, the wish to develop North Korea with foreign money could also be realized. The Park administration must be tempted to join China’s proposal, but the United States’ blunt protest against Korea’s joining the Asian Infrastructure Investment Bank is an obstacle.

That, however, is nonsense. Although its influence has weakened today, the Asian Development Bank used to be an institution that largely served Japan’s interests. In the early 1960s, the bank was established by Japanese businessmen to support Asia, particularly Southeast Asia.

The United States originally objected to the Asian Development Bank because it would compete with the U.S.-led International Bank for Reconstruction and Development. It changed its position to support the ADB because of Vietnam. It felt a desperate need for economic development in Southeast Asia to stop the spread of communism.

The U.S. is the second largest stakeholder in the ADB but it tolerates Japan’s control. Since its establishment in 1966, all nine presidents were Japanese and that says everything. All of them were either former high-ranking officials or those with a deep connection with the Japanese government, so there was no way for the bank to stay separate from the Japanese government.

In 2010, China attempted to take the place of the bank’s president. But Japan stopped it with lobbying. China’s demand that it be able to contribute more to the bank was also turned down because of Japan’s fear that China’s voice will only grow larger inside the bank.

Japan’s control of the ADB is apparent. Loans from the bank were concentrated on a few countries. From 1967 to 1972, 78.5 percent of the total aid was concentrated on five countries: Korea, Thailand, Indonesia, Malaysia and the Philippines. They were all countries that Japan has invested in heavily.

Japan overwhelmingly won major projects. During the same period, 41.7 percent of the total project funds were won by Japan. Criticism grew that the bank was serving as an in-house organ of the Japanese government. Research showed that the pattern of Japan’s foreign aid and the bank’s assistance pattern were similar.

More importantly, the bank’s current funding capability is far lower than the infrastructure investment demands in Asia. More than $700 billion is needed every year for infrastructure investment in the Asia-Pacific region, but the International Bank for Reconstruction and Development and the ADB are capable of funding only about 5 percent. There is more than enough need for new development banks in the region in addition to the proposed Asian Infrastructure Investment Bank.

Even if the Asian Infrastructure Investment Bank will be controlled by China, that is no justification to object to it. Takehiko Nakao, the president of the ADB, already welcomed the proposal to establish the Asian Infrastructure Investment Bank, although it may have been a sugarcoated remark. Jim Yong Kim, president of the World Bank Group - chosen by the United States - also declared his support for the plan.

Korea needs to realize that the ADB, under current regulations, is barred from making infrastructure investments in North Korea. In order to receive the bank’s aid, various economic statistics that fit international standards must be made public. North Korea, a hermit kingdom, won’t satisfy the requirement.

Since 1993, the North has consistently tried to join the ADB, but it was rejected for that reason. Although South Korea has supported the North’s participation, that did no good. If the Asian Infrastructure Investment Bank opens and invests in North Korea without strict conditions, Seoul will be thankful.

If the gains in joining the Asian Infrastructure Investment Bank are enormous, don’t we need to support the plan despite U.S. complaints? Korea is a country that can make an independent decision on a matter of national interest.