‘Flowers’ takes on a youthful twist

‘Flowers’ takes on a youthful twist 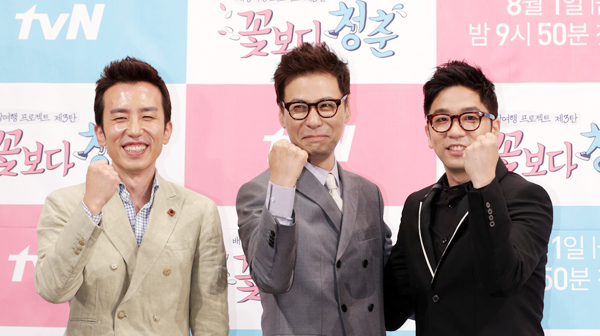 Yoo Hee-yeol, Yoon Sang and Lee Juck, who are all in their 40s, are the stars of the new reality travel show “Youth Over Flowers,” the third in the “Flowers” series. Provided by tvN

With conflicting work schedules, school activities and child care, it gets harder and harder to go on family vacations. But now it’s possible to experience not only one but two vacations from the comfort of your home through the new TV show “Youth Over Flowers.”

As the title suggests, the tvN program is the third in the “Flowers” series by producer Na Young-seok. The producer previously gained recognition through “Grandpas Over Flowers” and “Sisters Over Flowers,” which took elderly actors and actresses on backpacking trips around Europe.

This time the show takes a new twist as it divides the participants into two teams.

The first is the Laos team comprising of Yoo Yeon-seok, Son Ho-jun and Baro of B1A4, who all starred in the hit TV series “Reply, 1994” and are in their 20s.

Add on 20 years and you get the Peru team, which is made up of some of the nation’s best-loved and respected musicians: Lee Juk, Yoo Hee-yeol and Yoon Sang.

The new “Flowers” could seem less impressive than previous seasons because it focuses on a younger demographic instead of actors in their 70s.

At a press conference held on Monday, despite initial misgivings that viewers may have, Na said there are other elements that are introduced in the new season.

“When I first started with the ‘Grandpas’ series, the ‘Nuna’ [a respectful Korean word for older woman] series naturally followed, and after that I thought the series wouldn’t conclude ... not without a theme of youth included,” said Na.

“Though younger people traveling is not as shocking, the audience can relate to the younger cast and think, ‘I was like that, too, at that age,’ or ‘I should be like that at that age.’

“There’s something all ages can relate to and there definitely are other shocking moments to entertain the audience,” Na continued.

Without giving too much away, Lee revealed a few shocking moments that will be aired.

“I never knew Yoon Sang had such trouble going to the bathroom,” said Lee. “There are these daily trivial moments that show a different side of Yoon from how he is normally seen.”

Meanwhile, Yoon said that he found it hard to keep up with his travel companion Yoo.

“I saw a very manly side of him. He has no trouble adjusting to time zones and runs around wherever we go. He doesn’t even get altitude sickness,” said Yoon.

Jokes aside, the cast showed great admiration for one another and said they grew as people through taking part in the experience.

“I didn’t care much about traveling, and in a way I was kind of closed off,” said Yoon.

“After I came back, I was so glad I went with these two friends. In a way we worry about the same things working for a similar genre in the music business, and we were able to talk honestly to one another while traveling.”

Yoon also thanked the producers for making the trip possible.

The Laos team on the other had a more lighthearted experience.

“In my case, I fell for Yeon-seok. He takes care of you as if he were your mom,” said Son.

“He gave me my toothbrush with toothpaste already on it and put my BB cream on for me. If I were a girl I think I could date him,” joked Son.

“I thought of Baro as a very bright younger brother, but I realized he has serious worries and thinks in depth,” said Yoo Yeon-seok about his co-star, who couldn’t make it to the press conference due to a scheduling conflict.