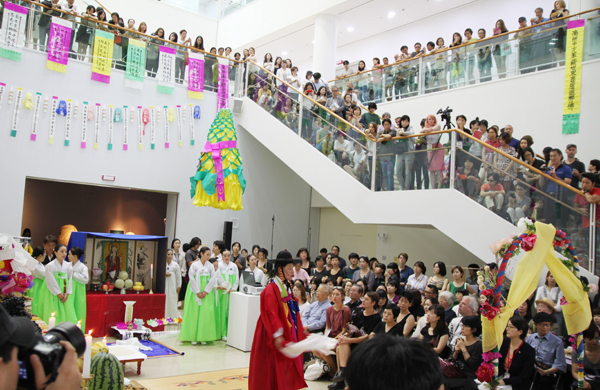 A gut, or Korean traditional shamanistic ritual, takes place yesterday in the hall of the Seoul Museum of Art. The opening performance was chosen for the eighth edition of Mediacity Seoul biennale, titled “Ghosts, Spies and Grandmothers.” The biennial opens to the public today.Provided by the museum

A contemporary art museum seems far from where a shamanistic ritual would take place. But at the Seoul Museum of Art yesterday, female shaman Lee Sang-soon held a gut, or a traditional shamanistic ritual, to console the spirits of the dead.

During the ritual, she prayed to her gods for peace for the souls of the people who might have suffered pain in the site of the museum, where a court of justice previously stood.

This was an apt opening performance for Mediacity Seoul biennale’s eighth edition, as it has the title “Ghosts, Spies and Grandmothers.”

The show opens to the public today.

“In this exhibition, we call upon lonely ghosts omitted from recorded history mainly in Asia, and listen to them,” Park Chan-kyong, curator of the 2014 edition said in a press preview yesterday. “The term ‘Spy’ is the keyword chosen to bring attention to the particularly serious experiences of colonization and the Cold War lived through in Asia. ‘Grandmother’ is the witness who has endured and lived the ‘Era of Ghosts and Spies.’”

Park, 49, a well-known artist and film director, has made a series of media art pieces about the survival and evolution of Korean shamanism during the country’s rapid industrialization and political upheaval.

Last year, he unveiled a feature film titled “Manshin,” which looks back on the life of Korea’s most famous living shaman, Kim Keum-hwa.

Kim has been misunderstood both in North and South Korea as both parts of the peninsula have persecuted her for being a spy.

When asked why his own work was not included in this exhibition, Park answered, “I intend to show various interpretations of ghosts, spies and grandmothers by artists of various cultural backgrounds other than mine.”

His intention seems to have been achieved. In Irish artist Jesse Jones’s film “The Spectre and the Sphere,” ghosts are not the kind that talk with shamans but are close to what Karl Marx and Friedrich Engels described in the first sentence of the Communist Manifesto; “A spectre is haunting Europe - the spectre of Communism.”

In the short film, a performer plays the left-wing anthem “The Internationale” with a theremin. Since the electronic musical instrument is controlled without physical contact by the performer, the performance had a magical ambience.

Among 42 artists from 17 countries, Greek-British artist Mikhail Karikis presents the video and sound installation “Seawomen,” which deals with haenyeo, the elderly female sea divers who live on Jeju Island. He focuses on the sounds they emit from using the ancient breathing technique sumbisori. It sometimes sounds alarming, sometimes joyful, and is often mistaken for the whistles of birds or dolphins.

“The sound is as sharp as a blade marking the horizon between life and death in the dangerous daily life of haenyeo,” the artist said during the press preview.

The exhibits also include Korean artist Haegue Yang’s latest installation, which is mainly made of yellow round bells that resemble the hypnotic images and sounds of shamans’ bells.