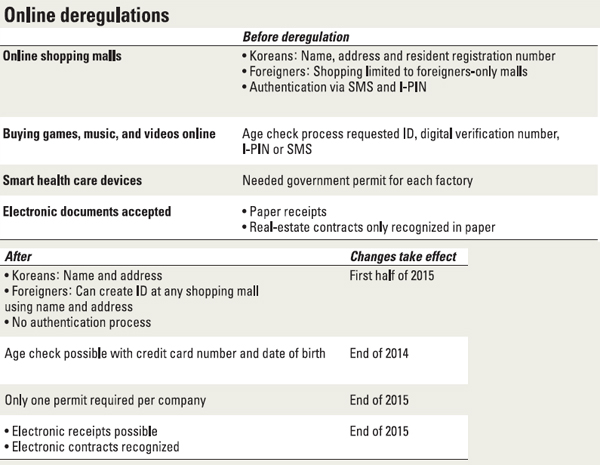 Online shopping for locals and foreigners will become much easier next year due to deregulations passed by the government in a ministerial deregulation meeting yesterday.

In April, Koreans and foreigners will only have to provide their name and shipping address to shop online and non-Koreans will be able to shop at any website they want, instead of being limited to online malls that have a foreigners-only websites.

The government’s strict regulations on self-authentication currently require local online shoppers to provide their name, shipping address and their resident registration number, and users must complete an authentication process via text messages and digital verification numbers. Some online shopping malls that required customers to input private information have experienced leaks in recent years.

Through a deregulation package that involves amendments to 20 laws, the Korean government hopes to nurture e-commerce and IT-based industries such as online finances, electric cars and telemedicine.

Foreign purchases at Korean shopping malls amounted to $24 million last year, and are estimated to reach $42 million this year despite difficulties created by verification certificates, according to the Ministry of Science, ICT and Future Planning. Sales from foreigners are also being hindered by the fact that right now, large shopping malls like 11th Street, Auction and G-Market only offer 10 percent of the products sold in their original Korean websites in their foreigner-only stores.

In July, the Financial Services Commission stopped requiring Windows security software Active-X for online payments, but an official at the Ministry of Science said yesterday after the Blue House deregulation meeting that the software was not the biggest problem.

“We thought the elimination of Active-X didn’t really help shoppers,” said Jeong Han-geun, director general of internet policy at the Ministry of Science, at a briefing after the meeting yesterday. “The real problems happened in these two areas: requiring resident registration numbers when creating an ID and the digital verification process when making payment.”

“The world e-commerce market shows an average growth of more than 15 percent every year, double the growth rate of the offline market. But Korea has fallen behind in relation to this global trend mainly due to the so-called ‘Galapagos regulations’ - regulations that only exist here in Korea,” the Science Ministry said a statement yesterday. “With these deregulatory measures, Korea is expected to see its export boosted by up to $300 million by 2017.”

Rules have been simplified to allow people in other countries easier access to Korean content distributor websites for dramas, entertainment shows, K-pop music and Korean games, an industry that has an annual growth rate of about 20 percent. Local broadcasters and music streaming websites have found it difficult to attract foreign customers because of complicated age verification measures.

Korean shows and music have age restrictions based on the maturity level of the content.

The government will deregulate its age-checking system by the end of this year to allow age checks with just a credit card number and date of birth, which are widely used to check ages in other countries.

Smart medical device companies will now only need one permit from the government to begin production, instead of having to obtain permits for individual factories.

“Companies from across the world are competing to become the top player in producing smart health care and medical devices, so the government will shorten the document requirements,” the Science Ministry statement said.

To push for the development of Korean electric cars, the Land Ministry and Science Ministry will jointly ease traffic and vehicle management laws and prepare a new frequency bandwidths for communication between vehicles and satellite GPS by the end of next year.

Also, by the end of next year, local businesses will be allowed to issue electronic receipts and real estate contracts.

Currently, these documents must be printed in paper, which some have said increases the risk of an information leak and contract forging.