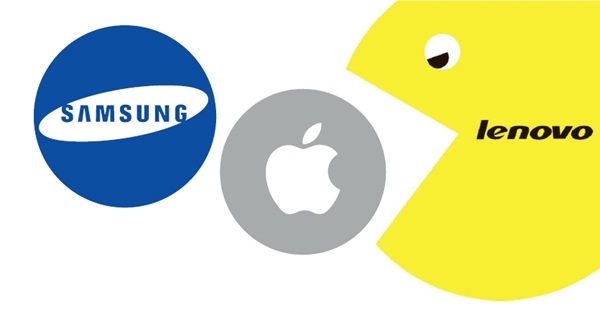 Samsung is now faced with the biggest challenge since it became the world’s leading smartphone company: Its dominant position in low-end smartphones has been lost to a Chinese company, while Apple horns in on the large-screen models it invented.

Although the market research company didn’t give the exact sales volumes for each company, it said a large majority of Lenovo’s sales are made in its home market, China. In other markets, Lenovo’s market position is still weak as it is considered a “second-tier smartphone brand.”

Chinese competition in smartphones, which was barely noticeable until last year, has grown quickly to threaten Samsung’s lead in the global market.

Another SA report released last month showed that six Chinese brands took the top 10 spots in the global smartphone market in the second quarter. And this was not limited to the entry level.

Other than the two powerhouses, Samsung and Apple, Chinese brands Huawei, Lenovo and Xiaomi took the other three spots in the top five. LG Electronics, which was once a leading competitor in the mobile industry, has fallen behind the Chinese competitors in its global share. Coolpad, ZTE and TCL-Alcatel also made it into the top 10.

Samsung may face a more robust challenge in the premium market, according to market analysts, as Apple joins the market for devices with bigger screens.

Ha Joon-du, an analyst at Shinhan Investment, predicted that with the release of the iPhone 6 and iPhone 6 Plus, equipped with 4.7-inch and 5.5-inch screens, Apple will likely increase its sales to 180 million units of iPhones by the end of this year and more than 200 million units next year.

“Although there are criticisms that the newly released iPhones didn’t bring much difference, switching the screen to 4.7 and 5.5 [inches] is actually a huge change,” Ha said. “[Apple] was the slowest in innovation but that also means that as slow as they were, consumers’ wait [for a new iPhone] has been long.”

He said the biggest battlefield for Apple and Samsung will be in China.

“If you analyze Apple’s second-quarter performance, sales made in North America and China accounted for 55 percent,” Ha said. “China is the region that Apple has been seeing outstanding results, more than in any other market.”

“Until 2013, most of the Chinese smartphones were 3Gs,” he added, “but since the first half of this year, LTE smartphones have been showing strong growth.”

By sales, China has already become the second-largest LTE smartphone market and soon it will be the largest.

Currently, Samsung has the lead over Apple and other competitors in the global LTE smartphone market, taking up 39 percent. Apple has 25 percent.

But in China, the Chinese company Coolpad has the lead with 18 percent while Samsung trails with 17 percent and Apple closely following at 16 percent.

“If Apple raises its market share in China with the iPhone 6, it will have an impact on Samsung,” Ha said.

“The aging of the Galaxy line seems to be faster than earlier projections,” said Lee Seung-woo, an analyst at IBK Securities. “The IT and mobile communication business suffered in the second quarter with operating profit falling by 4.2 percent due to increases in inventory and falling shipments. The third-quarter performance is expected to get worse.”

Lee projected that Samsung’s smartphone shipments in the third quarter will likely increase 11 percent compared to the previous quarter to 82 million units, but the company’s average selling price is expected to fall 16 percent due to floundering sales of its flagship models such as the Galaxy S5.

Overall, the analyst lowered his earlier projection for the Korean tech company’s third-quarter performances. Revenue has been readjusted from 50.9 trillion won to 49 trillion won, and operating profit stands at 5.2 trillion won instead of the 6.6 trillion won.

“If Samsung’s quarterly revenue fails to reach 50 trillion won or the operating profit below 6 trillion won, it would be the first time in more than two years,” Lee said.

Samsung’s shares haven’t been doing too well for the past week. The tech giant’s stock yesterday dipped 0.75 percent on the Kospi to close at 1.19 million won. This was the third time Samsung’s share has retreated below the 1.2 million won mark, all within five trading days.

The first time the share price fell below that mark was on Sept. 2 when it closed slightly above 1.19 trillion won. But it fell further the following day.

It was the first time in two years that the tech company’s share fell below that mark.

Furthermore, in the last seven trading days since Aug. 29, the company’s shares rose on a single day. Samsung shares were 1.7 percent higher than the previous trade on Sept. 4, which was the day after the company unveiled its latest Galaxy Note and the Edge.