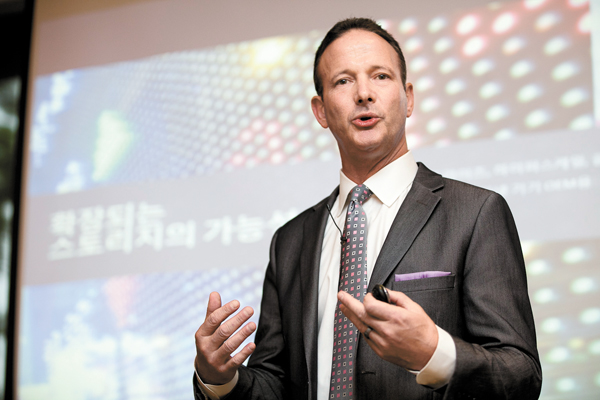 Ken Oberman, vice president of SanDisk. Provided by the company

As the use of digital devices rapidly grows and connectivity expands from smartphones and laptops to products that were previously considered non-digital, SanDisk, known for its camera memory cards, has set its eyes on aggressively expanding its commercial business in Korea.

Until now, the American company’s focus in Korea has been on retail. But a SanDisk executive said the company is changing up its game.

“Everyone here knows SanDisk. But if you had to guess what our revenue is in commercial and retail, what would you think it is?” asked Ken Oberman, SanDisk vice president, during a press conference in Seoul yesterday.

“Most of the time when I talk to people in the market, most of our customers believe our retail business is the biggest part of our business. But the real answer is that 62 percent of the company’s revenue is actually [from the] commercial side of the business. The balance is retail.” 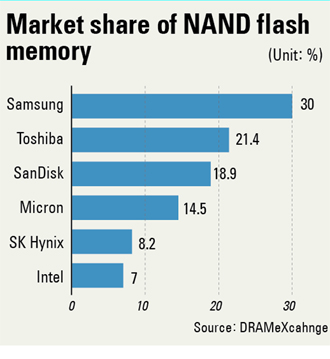 Oberman said the company has been expanding through mergers and acquisitions to provide a wider variety of storage solutions for its commercial clients.

In July, SanDisk acquired Fusion IO, a company that specializes in the development of flash-based PCIe hardware and software and nearly a year ago, it bought SMART Storage Systems, a developer of enterprise solid state drives (SSDs).

“We have a pretty good retail portfolio and we continue to develop and we continue to serve the market. What we launched a couple of years ago is really the growth of our commercial channels. And our growth into multiple segments of the business channel,” Oberman said.

According to Oberman, the company’s product lineup covers entry level and high-end solutions in various areas from cloud storage to embedded storage used in laptops, desktops and smartphones, as well as industrial goods such as automobiles.

“We are one of the few suppliers today in flash who can cover all the way from the entry level to hyper scale,” Oberman said.

He said consumption and demand have been growing rapidly as technology develops and can be incorporated into more products.

And the exponential growth in demand for NAND-based storage is expected to grow. Market research firm TrendForce projected that the NAND market will be worth $28 billion by the end of this year as higher-performance flash memory is used in a wider range of digital devices.

As of the first quarter of this year, SanDisk ranked third in the global market, according to DRAMeXcahnge. Samsung held the top place with a market share of 30 percent followed by Toshiba with 21.4 percent.

Oberman said Korea is one of its key core markets, as are the U.S., Germany, the U.K. and France.

The company said its target is to secure 20 to 25 percent market of the global market share.