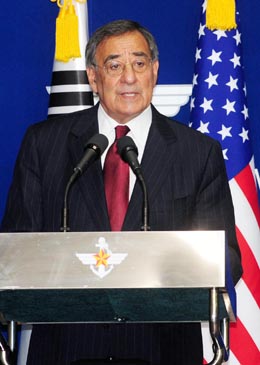 The U.S. government discussed a plan with the Lee Myung-bak administration to use nuclear weapons if North Korea invaded the South, a former U.S. defense secretary and CIA director has disclosed.

In a memoir published Tuesday titled “Worthy Fights: A Memoir of Leadership in War and Peace,” Leon Panetta writes that during an October 2011 trip to Seoul as the U.S. defense secretary, he had a Korea-U.S. security consultative meeting with then-Defense Minister Kim Kwan-jin (and current Blue House national security chief) to stress that the United States would provide “extended deterrence,” including its nuclear umbrella.

“If North Korea moved across the border, our war plans called for the senior American general on the peninsula to take command of all U.S. and South Korean forces and defend South Korea - including by the use of nuclear weapons, if necessary,” he wrote. “Our forces maintained a readiness posture that allowed them to ‘fight tonight.’ I left our meeting with the powerful sense that war in that region was neither hypothetical nor remote, but ever present and imminent.”

One of the biggest players in the Barack Obama administration, Panetta was the director of the CIA for two years before taking over the defense secretary job in July 2011. The retired secretary earlier last year issued a warning to the U.S. government that Pyongyang’s confrontational attitude was something to watch carefully, not dismiss, according to a report from CNBC.

The United States should be “very concerned” at the level of “provocation and bellicosity” coming from North Korea’s Kim Jong-un, as he leads his country into restarting its nuclear facilities, Panetta was quoted as saying.

The United States, South Korea and Japan need to be “very firm in sending them a message that we are going to do everything necessary to defend our security and defend our troops,” and to pay attention to the risks of a North Korean “miscalculation,” he also said.

In the memoir, Panetta recalls a trip on an American Black Hawk helicopter to the demilitarized zone after a meeting with then-South Korean President Lee.

He noted that the conflict between South and North Korea was halted by a truce but no peace treaty had ever been finalized, so the armistice could fail at any time as both sides keep a wary watch on each other in Panmunjom.