Coffeehouses for writers are back in public eye

Coffeehouses for writers are back in public eye 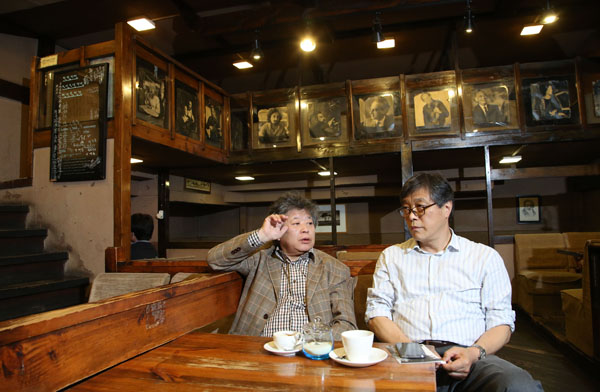 
Le Procope in Paris, Caffe Florian in Venice and The Elephant House in Edinburgh. What do these places have in common?

The cafe has stood on the same spot since 1956, offering coffee and a place to work for writers such as Kim Seung-ok, Park Tae-sun and Kim Hwa-yeong. 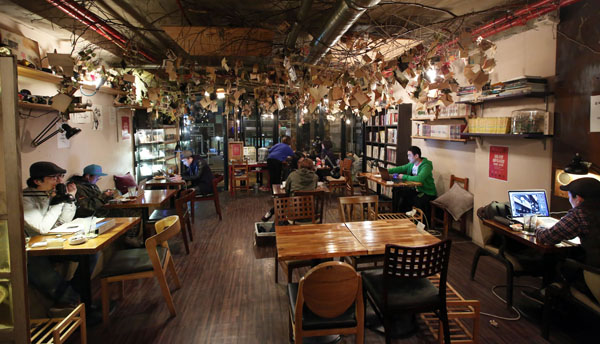 Yongdabang in Hapjeong-dong, western Seoul, is where the younger generation of Korean writers gather to find inspiration and to write. [JoongAng Ilbo]

Essayist Jeon Hye-rin also often sipped coffee there, and poet Kim Ji-ha even left a note in the establishment’s visitor’s book: “My Haklim days can be described with words like lost love, painful aftereffects of failed revolution and romance,” Kim wrote.

Haklim provided shelter to members of Seoul’s literary community in the 1970s who fought for democracy during the military rule in Korea, too. It was also where some of the most important works from that era were constructed.

For these reasons, as part of Seoul Metropolitan Government’s attempt to preserve modern and contemporary sites and structures, Haklim will be added to its “future heritage” list.

“Even if I couldn’t afford a cigarette, I had coffee [at Haklim],” said poet Kim Jeong-hwan.

“In consideration of students with little money, waiters there never ask customers to order. So we could stay there all day long, even without a penny.”

“All we do is we go over and ask if they are hungry after seven hours [if customers come in and make no order.]”

Haklim is unique in that many places similar to it no longer exist. For example, not even the site of Korea’s first coffeehouse, Kakadyu, can be found.

Many of the coffeehouses Korean literati frequented in the past gave way to today’s trendy cafes, mostly in the Hongdae, Yeonnam-dong and Garosu-gil areas where the current generation’s writers and poets hang out.

Case in point: Yongdabang in Hapjeong-dong, near Hongdae. Poet Oh Eun considers it his work place, library and meeting point. Gazing at raindrops falling on the transparent roof is one of his pleasures.

Books on philosophy and cartoons from different countries, placed in a disorganized manner on book shelves, are a treasure trove for him. Coming across random, colleague writers and poets such as Lee Yeong-ju, Lee Yeong-hun and Kim Tak-hwan is an added bonus.

“Coffee here tastes natural and smooth,” Oh said when asked about the flavor of his drink.

“But taste doesn’t really matter as I often enjoy poetry or conversation with it.”

In that sense, Yongdabang is to today’s writers what Haklim was to writers in the past.

Thanks to its appearance on highly popular SBS drama “My Love From the Star,” Haklim is now experiencing another heyday - this time among overseas tourists.

In the drama that ended in February with explosive success, Do Min-jun, the main male character played by heartthrob Kim Soo-hyun, is seen playing Go at the coffeehouse.

And as the drama enjoyed much popularity in other countries, particularly China, Chinese tourists have been flocking to the coffeehouse recently in a similar phenomenon to how tour packages emerged for some sites in Paris where Woody Allen’s “Midnight in Paris” (2011) was filmed.

“Our regulars may not really like this,” Lee said, in reference to tourists coming to the cafe in droves, “but thanks to the profits from selling coffee to tourists I was able to fix the old electricity system in the coffeehouse.”