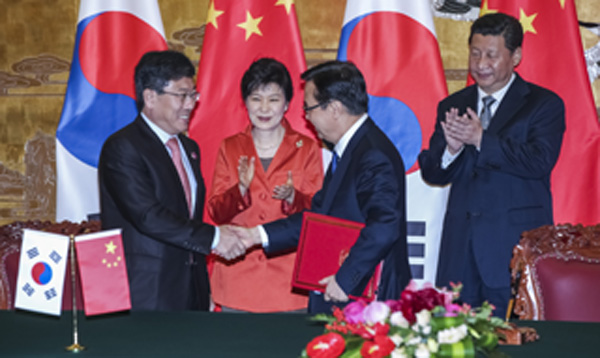 
Korea announced yesterday that it finally reached a bilateral free trade agreement with China, one of the world’s largest markets with 1.3 billion consumers, two and half years since negotiations first started.

The trade ministers of both countries signed an agreement in Beijing yesterday while Presidents Park Geun-hye of Korea and Xi Jinping of China looked on.

The agreement was described as “substantial” but still needs several procedures before coming into effect, including a signing by both heads of states.

And as the trade pact excluded categories considered sensitive in both countries - including rice and automobiles - questions immediately rose as to whether the governments rushed the agreement to meet a deadline.

There’s unlikely to be any backlash from Korean farmers since many agricultural products are excluded from the pact, including rice, garlic, lettuce and ginseng.

Korea’s government said the county has now completed a global free trade network that provides Korean companies, particularly small and midsize businesses, access to major economies extending from the United States to Europe to Asia. And it crowed about successfully protecting Korea’s agricultural market from what could have been a devastating inflow of cheaper agricultural and marine products from China.

The two sides agreed on 22 chapters including finance, communications and e-commerce, which is a first for China to include in a free trade deal.

According to the Korean government, China has never signed a trade agreement that is as open as the one it signed with Korea.

Both countries agreed to subject 90 percent of items currently being traded to tariff cuts over the next 20 years.

While China will remove tariffs on 20 percent of the Korean items that it buys immediately after the deal takes effect, Korea will do so for 50 percent of the total imported items from China.

In order to protect the local agricultural industry, the Korean government maintained its initial stance that 60 percent of imported Chinese agricultural, fishery and cattle products will not be subject to tariff cuts for a certain period of time. And half of them will be excluded from any concessions in the future.

“We did our best to maximize protection for the agricultural market,” said Woo Tae-hee, Korea’s chief FTA negotiator. “It is the first time Korea has kept 30 percent of the imported agricultural goods from concessions on duties.”

Field crops including peppers, garlic and onions; fruits such as apples, tangerines and pears; certain fishes, beef and pork will be excluded from concessions on duties.

Korea maintained a list of 852 highly sensitive items that will not be subject to any tariff cuts for an agreed period of time. Seoul said it was the smallest opening of the agricultural and marine products market among all the FTAs it has signed.

Rice has been excluded entirely from negotiations in the future.

“There will be no chance of putting rice on the negotiating table,” said Ahn Chong-bum, the senior presidential secretary for economic affairs.

While China gave up increased access to the Korean agricultural market, it asked Korea to forego greater access to the Chinese automobile market, which Korea agreed to. Autos are not included in the deal and there will be no negotiations over them for two years after the agreement goes into effect.

“For now, neither side wants to negotiate the automobile part,” said Woo. “If one of the countries wants to begin free trade of automobiles, it can raise the issue and start talking two years after implementation.”

Korean automobiles have been at the heart of FTA negotiations with other countries. If the 22.5 percent tariff imposed by the Chinese government on imported foreign cars no longer applied to cars by Hyundai Motor and Kia Motors, Korea could have gained a huge advantage over rivals like Toyota in the Chinese market.

But some in the business community consider the move strategic, as imports of cheaper Chinese cars would have definitely hurt the nation’s carmakers.