Koo back in familiar role as captain for matches in Mideast

Koo back in familiar role as captain for matches in Mideast 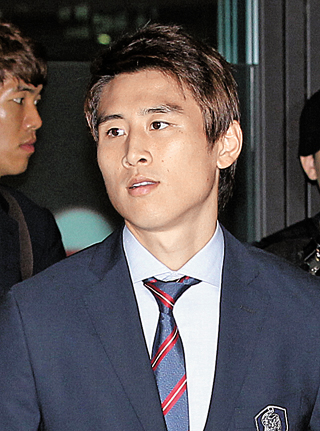 
The captain has come back. Koo Ja-cheol of Bundesliga club Mainz 05 missed the first two friendly matches under the national team manager, Uli Stielike, but came for the friendly against Jordan on Friday and is expected to start as a shadow striker against Iran tonight.

After leading the team in the 2010 Guangzhou Asian Games, the 2012 London Olympics and the Brazil World Cup, Koo was again named captain for the trip to the Middle East.

Though Koo wasn’t on the national team at the time, Stielike personally visited Mainz to check up on him in September.

Koo is now preparing for tonight’s match. Iran is ranked 51st in FIFA rankings, while Korea is 66th.

“We could not cheer up fans during the Brazil World Cup when the entire country was still mourning over the tragic Sewol ferry accident in April,” Koo said in an interview with the JoongAng Ilbo.

Q. You came back from an injury and assisted a goal in a league match against Werder Bremen. How do you feel now?

A. My form is not 100 percent yet. I need some time, but I’m back in games and I’m not very worried. I’m sure that I will keep getting better.

New Manager Stielike personally visited you in September. How do you see him as a manager?

German people are telling me a lot about him. They are curious how Stielike will manage the team. I have now spent some time with him and I think he might be a strict manager who can change us.

You couldn’t join the first two friendly matches against Paraguay and Costa Rica, and Nam Tae-hee of Lekhwiya FC became a strong competitor in your position.

Competition between players occurs whenever a manager is replaced. We have been in such competitions in the past, and we need to keep doing it in the future. What matters is that I can play as I want to and as the team would want me to when the time comes.

Iran was not very nice in the Asia preliminary rounds of the Brazil World Cup last year, and Iran’s Manager Carlos Queiroz even insulted Manager Choi Kang-hee last year. Do you want to get revenge this time?

I remember when we beat Iran in the third-place match in the 2010 Guangzhou Asian Games and again in the quarterfinals of the Asian Cup. Iranian players sometimes intentionally waste time when they’re leading the match or don’t play fair, which degrades Asian soccer. But it is true that Iran is a strong team.

What do you have to say about Son Heung-min of Bayer Leverkusen and Park Chu-young of Al Shabab, who returned to the team after four months of absence?

Son spent nearly four years in Germany and I watched him improve from a very close distance. I try to watch his matches as often as possible, and I am aware of how he has improved and become the league’s top player. Park came back after a long absence. I hope he will be helpful to the team and score as many goals as he can.

You were the top scorer in the Qatar Asian Cup four years ago. How do you feel about the next Asian Cup, which will be held in Australia in January?

I was able to go to the Bundesliga because I was the leading scorer in the Qatar Asian Cup. It was a very interesting and exciting moment. At that time, I was just a young player, but I’m more experienced now. If I join the national team for the Asian Cup next year, I want to win the competition.