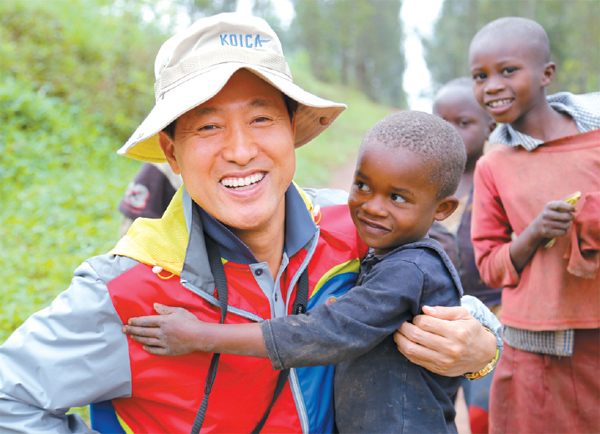 The phone call with former Seoul Mayor Oh Se-hoon was disconnected several times in the course of one conversation, a reminder that the 53-year-old politician was halfway around the world in Rwanda, a country of 12 million still lacking reliable telecommunications infrastructure.

“Hi. It’s been a long time!” Oh said in a spirited manner after repeated difficulties to reach him. The former mayor has been in the African country since July to provide advice on national development by sharing his experiences as a politician and a member of an advisory panel dispatched by the state-run Korea International Cooperation Agency (Koica).

Over the past two years, Oh has been out of the public view since he stepped down as Seoul mayor in August 2011 in the aftermath of controversy over free school lunches. Earlier that year, Oh, a former lawyer, surprised the political establishment by organizing a referendum on the free school meal program and put his job at stake.

Head of local governments who hail from the ruling Saenuri Party are threatening to cancel the free lunch programs in their jurisdiction in order to carry out free day care service for children aged 3 to 5. Local government leaders from the opposition New Politics Alliance for Democracy (NPAD) are warning the opposite, saying that they will stop funding free day care services in order to keep the lunch program running. The difference in their opinions stems from the fact that the former was championed by the Saenuri and the latter was the NPAD’s main campaign pledge in the 2012 general and presidential elections.

Below is an interview with the former mayor.

Q. What do you think of the ongoing controversy over free school lunch and free day care services between conservatives and liberals?

A. Everything comes faster than expected in Korea. I thought this debate over the welfare programs would come around in about 10 years. But it is a good thing that we are now having this debate, which is only the beginning of further discussions. While it is an unwavering fact that every country is running welfare programs and we need to expand the scope of welfare benefits for people, we must do it in a way that includes finding a revenue source to fund the programs. We are now having this trouble because we began a package of welfare programs without any preparation but only with eyes on the election outcome.

Why did you oppose the free school lunch program?

During my first four-year term as mayor, I put in place a welfare system that was self-sustainable and self-supporting, which encourages people in need to find ways to support themselves. I gave major financial incentives to recipients of basic living subsidies but only under the strict condition that they worked hard to become financially independent. It wasn’t an easy job, but at the end I put that system in place. Then out of nowhere, the opposition party came up with the free school lunch program. Following the opposition’s call on the lunch program would have required me to abandon the self-sustaining welfare programs altogether. I had a firm belief that a 100 percent welfare program that applies to all should not be carried out, knowing it would stumble into default in the end.

Do you still think putting your job on the line to hold a referendum vote in 2011 was the best you could do at the time?

People think I single-handedly orchestrated the referendum vote. But what really happened was that more than 800,000 Seoul residents with rational mind-sets signed petitions for the vote to take place. And thanks to their action, discussions on expanding welfare programs followed, and that made many people recognize potential problems. Democrats discouraged people from casting votes as part of their main campaign strategy, which I think is the equivalent to a declaration of defeat.

Oh’s gamble on his job turned out to not go in his favor, as only 25.7 percent of eligible voters in Seoul came out to cast ballots for the referendum on Aug. 24 in 2011, falling short of the 33.3 percent required for the vote to count. The opposition Democratic United Party, the precursor to the NPAD, ran a campaign urging people not to vote so that voter turnout would be less than 33.3 percent.

What ensued is a story familiar to many: Oh quit his job as promised in disgrace and was subject to public ridicule and criticism. The ruling party was also dealt a huge blow as former human rights lawyer Park Won-soon rose to seize the top post in the city government in a 2011 by-election and won his second term in local elections this June.

Do you now regret your decision to put your elected position at stake for a referendum vote?

It was the fault of my party that I did what I did. In retrospect, the job I had was not one that I chose to accept but was a grave responsibility entrusted by the people. I think that I was trying to convey a message to the people that the free lunch program for all was a decision big enough for me to put my political career at risk because I thought preventing the Democrats’ move was too important for the country’s future.

Do you think tax increases will be a key solution to the ongoing troubles surrounding welfare policies?

[The NPAD] is saying that as if it were an easy solution. But when the government lays out actual plans to increase taxes, public backlash is inevitable. With scarce revenue resources available, we have no choice but to prioritize what we must use as welfare investments. A solution will be drawn if lawmakers discuss priorities and where government funding should be spent in bipartisan cooperation. But if one makes the issue the center of the party’s identity and shows no room for compromise, there will be no answers.

Since he stepped down as Seoul Mayor, Oh has stayed overseas in England, Peru and now in Rwanda. In Kigali, the capital of Rwanda, he is on an advisory panel from Koica consulting on economic growth and infrastructure development.

What do you do in Kigali?

I am serving as an economic consultant to the city government. The country lacks both natural and human resources. And because it is surrounded by land, there is no port for it to engage in active trade. I am working with city government officials day and night seeking ways to make Rwanda a hub in East Africa by connecting its tourism industry with information and communications technology and make this country competitive in the services sector.

Oh will return to Korea in January after his six-month stay in Rwanda.