IT companies shifting toward B2B

IT companies shifting toward B2B

Global IT companies such as Samsung Electronics, Apple, Facebook and Google are tapping into the business-to-business (B2B) market as the market for consumers becomes increasingly saturated.

Seeking new growth, IT companies are shifting their focus from consumers to enterprises by teaming up to provide services for businesses.

Samsung has also exhibited at the IFA 2014 in September its B2B services that specialize in the educational, medical, hotel, transportation, finance and retail sectors. 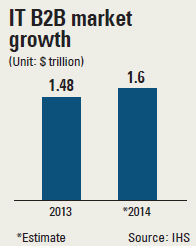 It will be the first time that the Korean tech giant has introduced B2B services completely separate from its traditional consumer products such as TVs and smartphones.

“The trend of enterprises using IT devices and solutions in their work environment will become a catalyst for Samsung Electronics to expand into the B2B market,” said Kim Seok-pil, head of the global B2B center at Samsung Electronics. “Because we understand consumer expectations as a leader in the IT industry, we can also understand the needs of the companies in the B2B market.”

“Combining Samsung’s wearable and mobile devices with SAP’s mobility will provide an innovative business experience to clients,” Lucas said at a press conference to announce the partnership with Samsung in Berlin last month.

Apple, which has been competing in the consumer market with Samsung and major Chinese device makers, also has a goal to increase the portion of revenue it makes from B2B from 10 percent last year to 15 percent by 2016.

Apple decided to join IBM, which has a strong presence in the B2B market, to develop software for businesses to be used with Apple products. IBM is also planning to develop a cloud service for Apple’s iOS.

Besides Samsung and Apple, software and Internet companies are also looking to the B2B market.

Microsoft is pushing sales of Office 365, its cloud service software for businesses.

Recently, it was reported that Facebook is developing a website called Facebook at Work, on which office workers can chat and share documents. According to the Financial Times and Reuters, Facebook at Work can be used for general office work, including organizing tasks and recruiting employees.

Facebook’s businesses service is expected to compete with Google Docs and Microsoft’s Office 365.

Global IT companies are flocking to B2B because it has become their most profitable market.

And the growth potential is huge. Unlike in B2C, where the market trends change constantly, products in B2B will last longer. IT companies can also profit from yearly maintenance and upgrades to services.

“The mobile B2B market is changing from device centered to device and solution services that can serve each industry,” said Kim Jin-hyung, a computer science professor at Korea Advanced Institute of Science and Technology. “As the number of people who work outside their offices nears 1.2 billion worldwide, the demand from businesses for such services will continue to grow.”