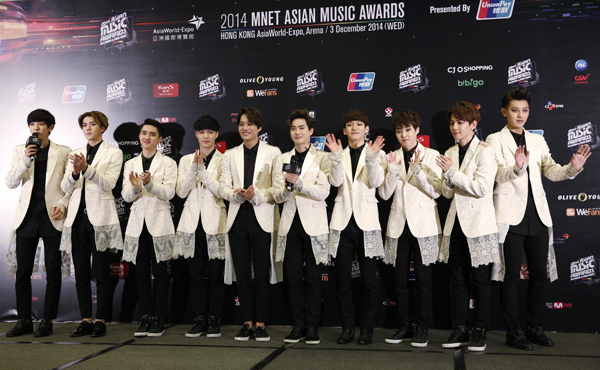 It was a tough year for the band. Two of Exo’s Chinese members filed separate lawsuits against their agency, SM Entertainment, and walked out of the group. But they managed to snag the Album of the Year and Artist of the Year awards, two of the grand prizes, along with Song of the Year.

Chen, a Chinese member of the group, said, “Thank you for all the 10 parents [of us] who are watching on TV.”

Korean member Chanyeol said, “I appreciate you … I want to tell you Exo is still alive and we will keep working hard so that you could root for us without worrying about us. Thanks Exo-L for trusting us no matter what happens.”

Exo-L is the official fan club of the boy group.

About 10,000 people gathered together to watch the annual awards in Hong Kong.

Korean singers and groups such as Taeyang, Ailee, Sistar, Epik High, Winner, 2PM and TaeTiSeo performed at the awards show.