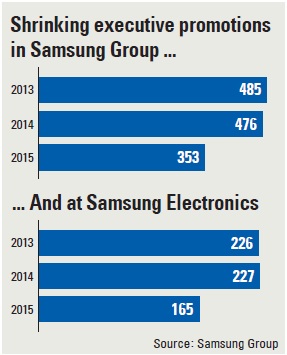 After 17 years of basking in the warmth of success, Samsung Electronics’ smartphone division is feeling the cold wind of layoffs and a major reshuffling.

The moves come at a time when the heir apparent for Samsung Group, Vice Chairman Jay Y. Lee, accelerates his reorganization of the conglomerate. Since his father, Chairman Lee Kun-hee, was laid low by a heart attack in May, the son has sold several affiliates and has become the public face of the brand, meeting with top executives of global companies such as Mark Zuckerberg of Facebook and world leaders like Chinese President Xi Jinping.

The number announced yesterday was 353.

The change was even more obvious at Samsung Electronics. Last year, the company promoted 227 executives. This year, as profits fell precipitously, the figure dropped to 165.

Last year, 161 people reached the executive ranks for the first time, the largest number in the company’s history. This year, the figure retreated to 110.

The JoongAng Ilbo reported Thursday that Samsung Electronics is in the middle of a major restructuring of its mobile communication division, which is responsible for smartphones. The newspaper reported that 25 percent of its 205 executives are being reshuffled after the smartphone business performed badly this year.

Some 50 people are either being sacked, repositioned as advisers, encouraged to take a leave of absence or reassigned to other affiliates.

J.K. Shin, the president in charge of the IT and mobile communication division, and Kim Jong-ho, who heads the global production centers, are off the hook and will remain in their current roles.