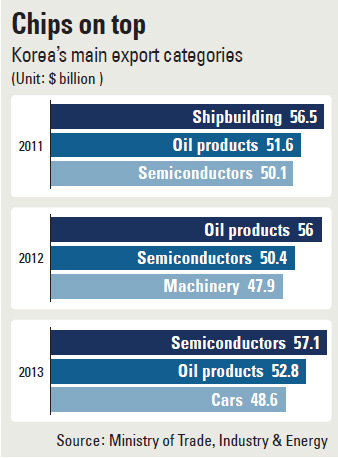 After passing the Hobeop Interchange of Yeongdong Highway from the east, a construction site comes into view with dozens of construction cranes and workers toiling late on a chilly night. SK Hynix is building a D-Ram semiconductor factory on about 66,000 square meters (710,000 square feet) of land, which is expected to be completed in the second half of next year.

The nation’s No.1 company, Samsung Electronics, is about to have a gloomy Christmas due to crashing smartphone profits in the global marketplace. But there’s nothing but cheer and optimism at SK’s factory facilities in Icheon, Gyeonggi, as restaurants and pubs in the area stay open all night long thanks to the factories already operating - which run 24/7.

The semiconductor business is now Korea’s top export earner. Through November, the nation’s major semiconductor makers including Samsung and SK pulled in about $56.8 billion in revenues, the largest ever and about 10.9 percent of the nation’s total exports for the period.

There are more than two weeks remaining in 2014, but since oil products are the second-largest export item with total sales of $48.1 billion through November, semiconductors will be the nation’s No.1 export business for the second consecutive year. Industry insiders say total exports for the business will exceed $60 billion by the end of the year.

The semiconductor business, which began in the early 1980s, earned Korea foreign exchanges that were used as seed money to develop advanced electronics industries, including smartphones and wireless communication devices. It was the No. 1 export business for 16 years, from 1992 to 2007, but started fluctuating in 2008 due to the global finance crisis.

In 2008, Korea only pulled in $32.8 billion, just 7.8 percent of the nation’s total exports, and chips ranked sixth in export earnings.

Chips regained the No.1 spot in 2010, but the glory only lasted for the year as companies in the business invested too much money on expanding their production lines without winning contracts.

The reason that the business has thrived through the decades is because Samsung and SK won a series of games of chicken early on with global semiconductor makers, including NEC. Samsung Electronics has led the industry since the 1990s and SK became the world’s No. 2 after it made an average of 3 trillion won in annual investments since 2012. SK posted a record operating profit of 1.3 trillion won in the third quarter of this year.

Today, the two Korean semiconductor giants control more than 60 percent of the global market share for all kinds of chips.

But Korea can’t rest easy because the Chinese are coming. The Chinese government announced a plan of making more than 350 billion yuan ($56.6 billion) in revenues next year and to raise about 120 billion yuan in investments order to accomplish the goal.

Such aggressive investments remind people in the industry of when Korea set a goal of catching up with Japan in memory chips.

China already has better technologies in non-memory semiconductors, in which Samsung and SK are weak.