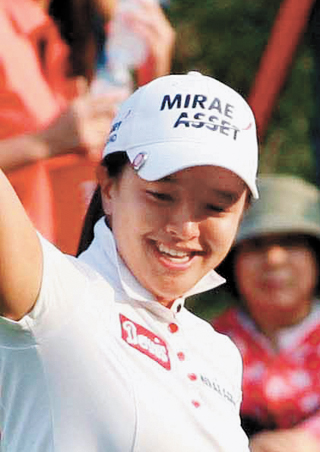 Kim Sei-young, known for her powerful tee shots, will be moving into the LPGA next year, but the 21-year-old said she thinks her long drives alone might not be enough to bring her success on the U.S. tour.

Kim qualified for next year’s LPGA after tying for sixth at 7-under 353 at Q-School earlier this month, but the fierce competition has left her somewhat worried.

In the KLPGA, Kim has had the longest average drive for the past two years, but she found that they weren’t long enough to beat players from all over the world. Kim was grouped with Ariya Jutanugarn in the final round of Q-School. Kim hit a 270-yard tee shot, but the 19-year-old Thai native shot 20 yards farther.

Kim said it was first time her tee shot had seemed short. The golfer is only 5-foot-3, but she can tee off as well as power hitter Lexi Thompson, who is several inches taller. But Q-School gave her a valuable lesson: Short game and course management are more important than just sending the ball the farthest.

“In domestic tournaments, golfers either have long or short tee shots, but they had various tactics that could be used for each hole,” she said. “I still can take advantage of my long shots, but short-game skills around the green were much more important.”

The learning experience also explains why she underperformed in some of the LPGA tournaments this year. She failed to make the cut at the Kia Classic in March or the Lotte Championship in April, and was not in the top 40 at the Kraft Nabisco Championship in April or the U.S. Open in June.

“I should admit that I could not fully adapt to the surroundings and I also lacked tactics,” Kim said. “So I’m planning to fly to the United States on Jan. 4 to get used to U.S. courses and improve my short-game skills.”

Still, she said that the strength she gained from practicing taekwondo, which she believes is the reason for her long drives, will help her adapt to the new environment.

She practiced taekwondo until middle school because her father, a taekwondo instructor, had urged her to do so. She has a third-degree black belt.

“I hope I can make a soft landing in the LPGA by winning a title next year,” Kim said. “Winning the U.S. Open, in particular, would make me feel like I have conquered the world.”

Kim’s first tournament in 2015 will be the Coates Golf Championship on Jan. 26 in Ocala, Florida. She will face tough competition for LPGA Rookie of the Year with several other Korean golfers, including Kim Hyo-joo, Baek Kyu-jung, Jang Ha-na, Kim Soo-bin and Park Ju-young.