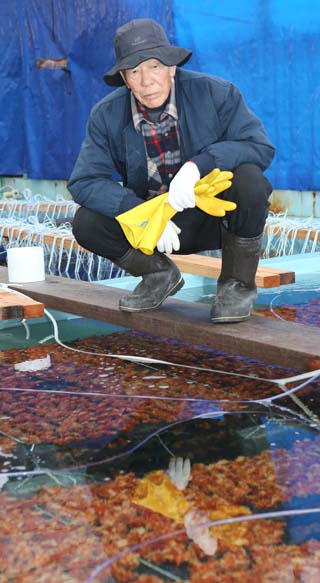 Jeon Jae-yong, who was captain of the Gwangmyeong 87 in 1985, still recalls vividly the events of Nov. 14, 1985, when he decided to rescue 96 refugees who fled Vietnam in the South China Sea. By Song Bong-geun

Some 30 years ago, the fishing boat captain, now retired, saved the lives of 96 refugees who fled Vietnam. And many of those people - often referred to as Vietnamese boat people, a demographic made up of those who fled the country over sea after the Vietnam War ended in 1975 until the early 1990s - still keep in touch each holiday season.

Peter Nguyen, who settled in the United States, refers to Jeon as the “Dear Captain” and reached out to him in 2002.

To this group of Vietnamese, who fled their homes decades ago and have since resettled across the world, Jeon will always remain their Santa Claus. Some continue to send him cards and gifts.

A group photo of the 96 Vietnamese refugees when they were housed in a shelter run by the Korean Red Cross. Provided by Jeon Jae-yong

“After I rescued them, I went through ups and downs in life, but now, I am happy because I have more foreign friends than anyone else,” Jeon said in an interview with the JoongAng Ilbo on Monday in his seaside hometown of Tongyeong, South Gyeonsang.

He still recalls vividly the events of Nov. 14, 1985, as he sailed the South China Sea off the eastern coast of Vietnam on a 400-ton tuna fishing vessel.

Jeon was 45 years old then and had spent the past year sailing as the captain of the Gwangmyeong 87, with 24 crew members.

The ship, loaded with more than 20,000 tuna fish, was heading back toward Busan ahead of Christmas, and the men were all excited to return home to their families.

More than 25 ships, including a super tanker and container ships, had passed by ignoring their pleas.

Captain Jeon ordered his ship to slow down and quickly summoned his most senior sailors. At that time, the Korean government did not recognize refugees, so Jeon explained to them the problems that rescuing these people might bring about.

“How can you just pass by people who are dying?” Jeon said. “I will take full responsibility for what happens afterwards.”

The crew decided to follow their captain’s orders and made a “miraculous U-turn” for the Vietnamese refugees, who at that point had run out of food and drinking water and were simply awaiting death.

Jeon reported back to his company’s headquarters in Korea, who told him to “abandon them on a nearby deserted island.”

But he refused to comply, telling officials that abandoning the group would violate international laws and likely create diplomatic problems.

So for the next 12 days, food and water for 25 people had to be divided among 121 people until the ship reached Busan.

After a year and a half, the Vietnamese rescued that day were relocated to various countries, including the United States, France and Austria.

But after arriving in Busan, Jeon was immediately summoned by the Agency for National Security Planning, the successor of the Korea Central Intelligence Agency, and underwent intense questioning and investigation.

He was fired from his job not long after and other shipping companies refused to hire him, despite 11 years of experience as a captain.

So he eventually purchased his own 3-ton boat and decided to make his living as a fisherman. Just two years later, however, burdened by heavy debt, he was forced to give up this ambition.

But he never left the ocean.

He returned to Tongyeong, and since 1994 has earned his living cultivating and catching sea squirts by the seaside.

These days, Jeon keeps himself busy, raising the creatures and treating them almost tenderly.

Regarding the Sewol ferry sinking on April 16 that killed more than 300 people, the 74-year-old said, “Rescuing people in distress in the seas, even before talking about one’s duty is simply common sense, according to the seamen’s code. I find it a pity that these days, such character education is seriously lacking.”

When asked if he had any regrets about that fateful U-Turn in the South China Sea three decades ago - a decision that cost him his job and his livelihood - Jeon added, “It’s true that I went bankrupt after I rescued those people. But who wouldn’t have done the same when people were dying?

“People are too obsessed with money,” he continued, “but after you die, what use is money? True happiness is if you can work hard at what you do and live helping people in need.”

His 93-year-old mother, who is currently suffering from Alzheimer’s, agrees. When her memories return briefly, she often tells the people around her, “Do you know what kind of person my son is? He rescued the lives of over 90 people.”