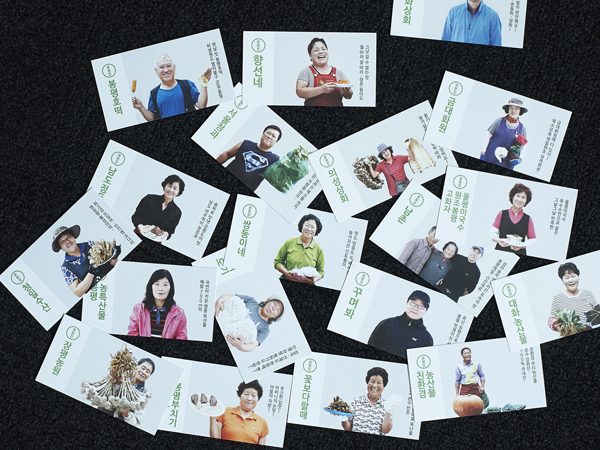 An image of business cards designed by Hyundai Card for the merchants of Bongpyeong Market in Gangwon.

Coming up with ways to encourage people to shop at traditional markets has had bureaucrats scratching their heads recently.

The government banned large supermarkets such as E-Mart, Homeplus and Lotte Mart from opening up within a kilometer, or three quarters of a mile, from traditional markets and even forced them to close their doors two Sundays a month.

They also said they channeled funds into revitalizing the ailing markets, but the JoongAng Ilbo recently revealed that most of the 3.34 trillion won (around $3 billion) worth of taxpayers’ money used for these projects over the past decade was misused or wasted.

Despite the efforts, overall sales at traditional markets have dropped over the past five years, according to Statistics Korea, while the public have become skeptical of the government’s ineffective efforts.

This led critics to surmise that a full-fledged campaign to revive the markets through innovative ideas rather than providing mere financial support was needed. 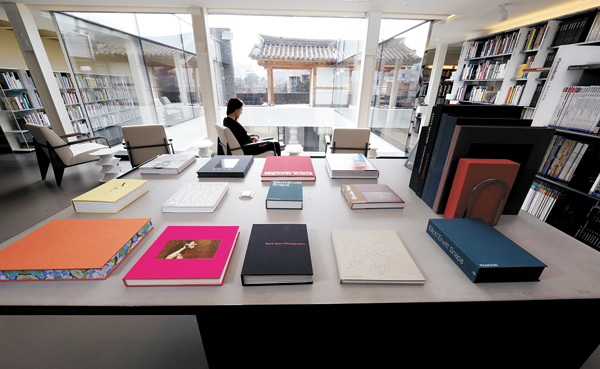 As a result, Hyundai Card and Hyundai Capital (the article will refer to the two companies as Hyundai Card from here on), which have been redefining finance through creative means, held out a helping hand.

In a joint project, the company recently gave Bongpyeong Market in Gangwon a brand new look.

The updated shopping emporium began giving its visitors a completely different experience after reopening on April 27.

But instead of just doling out a large sum of money to help the market, the company paid attention to every little detail, including how traditional markets are viewed by consumers and what inconveniences shoppers and merchants face.

Hyundai Card tackled those problems with the same strategy that helped them find new opportunities: through design.

“We focused on the ‘development to preserve’ idea,” stated the company in a press release. “So instead of building the most up-to-date buildings and arcades to ‘modernize facilities’ we developed products that could emphasize the traditional markets’ distinct features and focused on improving facilities that caused major inconveniences.”

Hyundai Card embarked upon their “Traditional Market Revitalization Project” with one question in mind: Why don’t people visit traditional markets?

After research, Hyundai Card found that people were dissatisfied with traditional markets because they found them inconvenient, unclean, unenjoyable to visit and felt that their products were not as trustworthy as those from large supermarkets. The company started off by addressing these issues.

A bus stop in Jeju Island was given a minimalist design by Hyundai Card in an effort to make sure it harmonizes with the natural beauty of the island. The project to reinstall bus stops with new designs will continue across the island in the “Gapado Project.” Provided by the company

As Bongpyeong Market draws in as many as 5,000 people with its more than 100 stores during peak season, Hyundai Card designed and installed standardized canopy tents and stands for all the stores to create an organized aesthetic and provide more space for visitors.

From top to bottom: A rest spot has been established at Bongpyeong; A newly designed logo at the entrance of the market; “Sunyoung Halmoni,” or “Grandmother Sunyoung,” sells fresh vegetables under her new sign; Identical clip boards inform consumers about the origin and prices of products while providing an organized look.

Lack of information about the origin of products or their prices, as well as worries about hygiene, were also cited by shoppers as reasons to avoid traditional markets.

Hyundai Card therefore helped merchants repackage their products using sanitary methods and distributed small signboards that could be clipped onto stands to give information about products.

The company also designed a logo for Bongpyeong Market and printed it onto stickers to help merchants brand their products.

Each merchant received their own signs showing their pictures and telephone numbers, along with smaller versions on business cards to promote trust from consumers.

“Since my face is on the signboard, I can feel that consumers can trust me and the product I sell, which used to have no information at all and products scattered here and there in front of me,” said Kim Hyung-rae, 45, a grain retailer who runs Daeheung Sanghoe, a store that was handed down to him by his father.

On Kim’s signboard it says, “A cereal specialty store connecting 50 years of tradition by father and son.”

“I distributed my business card to customers and I began to receive a lot of orders. I really feel like I am running a business now,” Kim said.

In addition, Hyundai Card installed an information center, which also acts as a resting area in the middle of the market, where visitors can sit around chit-chatting while eating food - “as if they are out on a picnic,” the company said.

Hyundai Card said it chose Bongpyeong Market because it felt the merchants who had toiled there for generations had stories to tell.

“Such stories and the whole history of this traditional market was appealing enough for not only the older generation but all young and old, women and men of all generations to come and enjoy and experience,” said Hyundai Card in a press statement.

“The homework for us was how to help the merchants show those charms that they already have to consumers to revitalize the market.”

The market used to sell several goods made from buckwheat, such as pillows and teas, but Hyundai Card said they were not enough to attract family visitors and the younger generation.

Several chefs working for Hyundai Card, who all have backgrounds at five-star hotels, rolled up their sleeves to develop a new menu using buckwheat that could appeal to children as well as adults.

These included buckwheat hotteok, or sweet rice and sugar pancakes, fried buckwheat noodles, pizza and more. The recipes were then passed on to the merchants.

Since 2010, Hyundai Card has been helping small shops across the country such as fruit stores, snack bars and hairdressers by redesigning their signs and interiors, and as providing business consulting, in an effort to help small entrepreneurs support themselves.

The effect was positive as most of the businesses said they saw their sales more than double. And after hearing about the success, Gangwon Provincial Government asked Hyundai Card for help with its traditional markets.

It’s been about eight months since Bongpyeong got a fresh start. The responses have been favorable and each store is seeing an average 30 percent increase in sales, according to the company.

Currently, the company is producing a manual and said it will continue to help ailing traditional markets across the country revitalize in their own style.

“We hope that Bongpyeong Market’s success has proved that traditional markets have enough competitiveness to sustain and that this know-how is expanded to other traditional markets in the country,” said an official from Hyundai Card. “The key is not to develop in an up-to-date style, but to ‘develop to preserve.’?”

Such a vision starts from Hyundai Card and Hyundai Capital’s CEO Chung Tae-young’s philosophy of searching for corporate social responsibility projects that differ from what other companies are doing or have already done.

Development is not about demolishing the original and building something new, according to Hyundai Card.

The company has been working with Jeju Provincial Government on the Gapado Project to prove this.

Gapado, a small islet located 5.5 kilometers away from Moseulpo Port south of Seogwipo City on Jeju Island, is famous for its annual Green Barley Festival in April.

But there are no other events to attract visitors to the island, which is difficult to get to. Despite its beautiful nature, the area has been seeing a decrease in visitors as well as a slump in its number of residents because of a lack of economic resources.

After signing a memorandum of understanding with the local government in 2013, the company has been developing the island in the hope of turning it into an eco-tourist hot spot. Empty houses and neighborhoods will turn into green guest houses while one neighborhood will be transformed into a residency area for artists.

Led by renowned architect Choi Wook, Hyundai Card has been tearing down and rebuilding conventional asphalt roads and buildings while constructing architecture that will go in harmony with the islet’s natural environment, according to officials.

“In an effort to transform Gapado into a new paradigm islet where nature, art and the local residents reside together, we’ve been carrying out various studies and research for many months,” said an official from Hyundai Card.

“We have more steps to complete the project but hope to see in the end, Gapado inspiring people and becoming an island that people want to stay for a long time.”

Many cultural projects carried out by Hyundai Card are rooted in this philosophy of innovation and beautiful aesthetics.

The company opened up its Design Library and Travel Library in Seoul by securing a vast range of rare books on design and travel while collaborative exhibitions with the New York’s Museum of Modern Art (MoMA) have been held at the Design Library.

Paola Antonelli, MoMA’s senior curator at the Department of Architecture and Design, who visited the Design Library for the recent “Digital Typefaces” exhibition, said during an interview with the Korea JoongAng Daily late last month that “Design is what shows a country’s cultural and economic power of a country.”

Antonelli also added that design can be used in politics as well as an alternative product for economic growth.

She said she believes that “design is the future of a company” and “that the government must recognize design’s economic value on a national level.”

It is great to see large companies in Korea noticing the power of design, Antonelli said.

“In that sense, Hyundai Card is on the right track.”