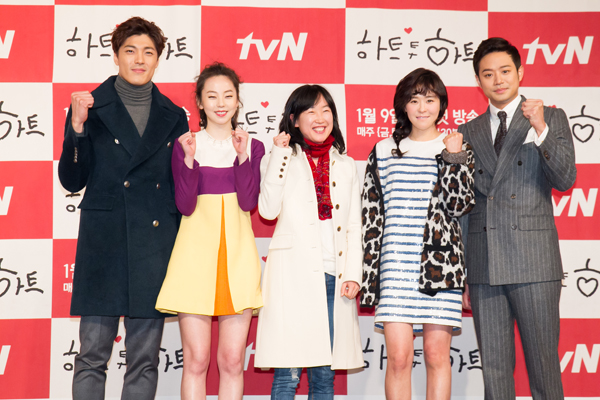 Director Lee Yoon-jeong, center, and the lead actors of “Heart to Heart,” from left, Lee Jae-yoon, An So-hee, Choi Kang-hee and Chun Jung-myung, attend a press conference on Dec. 30 for their upcoming tvN drama at the 63 Building in Yeouido, western Seoul. Provided by CJ Entertainment

Director Lee Yoon-jeong, who was behind the hugely popular drama “The 1st Shop of Coffee Prince” (2007), is coming back with another lighthearted rom-com drama, “Heart to Heart,” after a two-year hiatus.

“I hope viewers will find a way to love themselves through my drama. That was the intention of ‘Heart to Heart’ before I planed my comeback,” Lee said at a Dec. 30 press conference at the 63 Building in Yeouido, western Seoul.

The upcoming drama is attracting much attention for its cast of A-list actors such as Chun Jung-myung and Choi Kang-hee. An So-hee, a former member of the girl group Wonder Girls, will make her TV debut in the drama as a sidekick.

Choi, who has become an icon by playing the role of adorable and plucky leading ladies in various rom-coms since her debut in 1995, will play the title role of Cha Hong-do in “Heart to Heart.”

In the show, Cha is suffering from social anxiety because of her profuse blushing and the only way she can hide the flaw is by disguising herself as an old lady.

“I had to spend around four hours in makeup to become an old lady, but it was not that hard since I love the character, Cha Hong-do. She is a lot like me,” Choi said.

The male protagonist Ko Yi-suk, played by Chun, is an ostentatious physiatrist who was once wealthy and had a good reputation, but he lost it all in a second after he was framed for murdering one of his patients by Cha, who lists him as a suspect. In fact, the patient had committed suicide in front of Ko while he was very drunk and Cha misunderstood the scene of the crime.

“I concede that the plot of a bizarre man and woman falling in love after an unexpected event and the character I play are quite typical in a rom-com series, but there is definitely strength in this story. You will see the divergent figure of a protagonist in a rom-com in this drama,” Choi said when reporters asked her if she felt that the roles she played in previous dramas was similar to this one.

Chun added, “The chemistry between the two main characters will be different from other dramas because the actor and actress learned how to focus on the person, not a story from the director.

“The love story of the two supporting characters also adds another level to the drama. Ahn, especially, acted unbelievably well,” he continued.

Most of the attention has been given to the director’s stance on airing the drama in the slot right after “Misaeng,” which has become a nationwide sensation with its realistic depiction of the lives of office workers in Korea.

However, the director said she does not feel pressure from the situation.

“A good drama that can touch a viewer’s heart is created when the actors and director show the strengths of each character. It seems like a formulaic rom-com, but viewers will feel like it’s brand new because it is a good drama,” said the director.

“Heart to Heart” will air on cable channel tvN on Friday and Saturday starting 8:30 p.m. on Jan. 9.