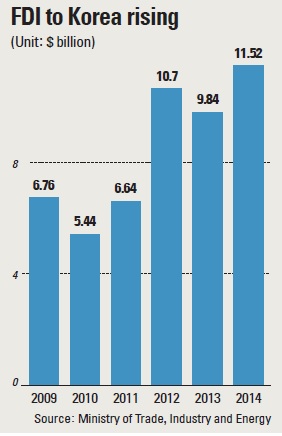 Foreign direct investment (FDI) to Korea reached a record high of $11.5 billion last year, an increase of about 17 percent over 2013, due to cooperation with new free trade agreement (FTA) partners and eased regulations on investments made by foreign companies.

Last year, Korea sealed FTAs with Canada, China, New Zealand and Vietnam, and the foreign investment promotion act was revised to give tax exemptions to foreign companies that open research and development centers or headquarters in the country.

According to data released Monday by the Ministry of Trade, Industry and Energy, the FDI surge was mostly due to a sharp increase in Chinese investment in the local service industry, including in cultural content and online retailing. It was also boosted by European and U.S. companies acquiring Korean businesses.

“Unlike in the past, when FDI in Korea was mostly focused on real-estate development projects like building resort complexes near tourist spots, foreigners last year started showing a new investment pattern of injecting money into cultural content, food and fashion,” said Kwon Pyung-oh, deputy minister for international trade and investment.

But when it comes to sheer volume of investments, the European Union was the largest investor last year, injecting a total of $6.5 billion, followed by the United States ($3.6 billion), Singapore ($1.7 billion) and China ($1.2 billion).

However, China’s investments to Korea increased the most last year to $1.2 billion, or by 147.2 percent.

Chinese investment posted $121 million in the second quarter of last year, more than double that of the first-quarter, after an announcement that Chinese President Xi Jinping would attend a presidential summit in Seoul in July.

“These cases, in which Chinese companies made indirect investments through their businesses based in Hong Kong and Singapore, are also increasing,” Kwon added.

European and American investment mostly came in the form of mergers and acquisitions of Korean companies.

Meanwhile, investment from Japan shrunk 7.5 percent to $2.5 billion, mainly due to the weak yen.

By industry, services attracted $6.76 billion worth of FDI, about 60 percent more than last year, while the manufacturing industry brought in $4.71 billion. FDI to the service industry mostly went to financiers and insurers, local corporate software developers and consulting companies.

The Trade Ministry said it hopes to see FDI rise to $20 billion this year.