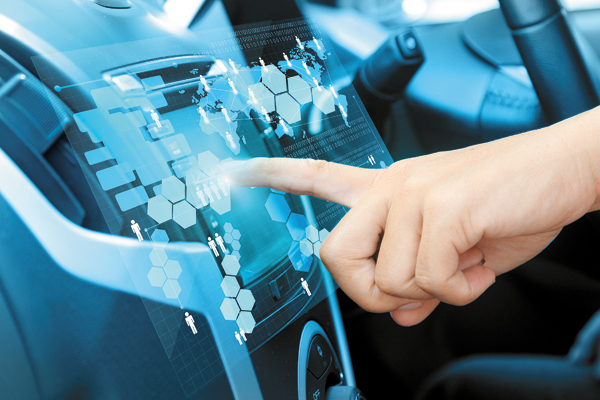 It was the first appearance at the CES since 2011 for the son of Hyundai Motor Group Chairman Chung Mong-koo.

He spent most of his time in the Las Vegas Convention Center at the booths of electronics companies before heading to Hyundai Motor’s exhibit. There, he saw cutting-edge examples of the convergence of automotive and information technologies such as the augmented reality head-up display (AR-HUD) system available on the Genesis and a lane-departure warning system that uses 3-D windshield images.

Smart cars are predicted to be a powerful future growth engine for automakers. According to the LG Economic Research Institute, the global Internet of Things (IoT) industry, which includes both wearable devices and smart cars, will grow 22 percent annually from $200 billion in 2013 to $1.2 trillion in 2022. It added that IT devices and software accounted for 20 percent of automobile components in 2010 and will double to 40 percent this year. Hyundai Motor announced on Tuesday it will invest 3 trillion won ($2.73 billion) in the smart car industry over the next four years.

The size of the exhibition area occupied by automakers at the CES is up 17 percent from a year ago. Three companies - Volkswagen, Nissan and Honda - are first-time exhibitors at the CES this year, joining Audi, BMW, Chrysler, Ford, General Motors, Mercedes-Benz and Matsuda. Hyundai and Kia have alternated their participation since 2009. 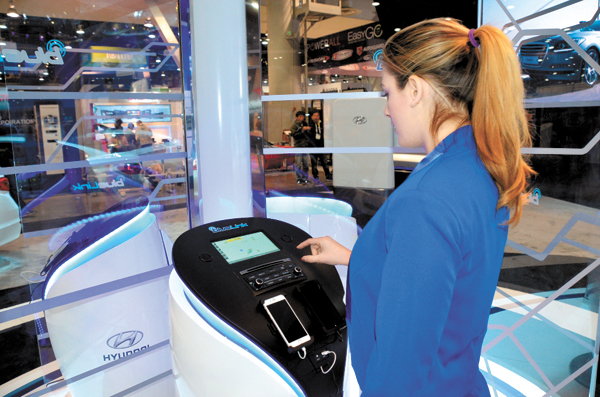 A Hyundai Motor employee demonstrates how a multimedia entertainment system operates with the smartphone application CarPlay by Apple during the International Consumer Electronics Show in Las Vegas. Provided by Hyundai Motor

In the 2015 show, Hyundai Motor has introduced 17 information technologies for cars under the theme “Technology With a Human Touch.”

One of Hyundai Motor’s core technologies is the Blue Link system, which allows a driver to use a smartwatch to start the engine, open and close doors, and locate a parked car. The system also lets a driver turn on the headlights and honk the horn via a smartwatch.

“We want to be a leader in wearable devices for cars,” the automaker said in a statement. “We will introduce this Blue Link system in the U.S. market in the first half of this year.”

The ultimate goal of IT-car convergence is development of a driverless system, a goal of Toyota, Volvo, Audi and BMW.

Industry insiders say driverless technology is a long way from being available commercially, but its essential components have been developed and some of them are in use. Smart cruise control, which maintains a set distance when following vehicles, is being used by Mercedes-Benz, Lexus and Audi. Hyundai Motor also applies the system to its Genesis and Aslan premium sedans.

In addition to Smart Link, Hyundai Motor introduced a series of smart car technologies. One is Lifelog, which provides information about a driver’s health and driving habits, and another is the Advanced Driver Assistance System, which displays the time remaining before traffic signals change. It also introduced the Remote Parking Assist System. 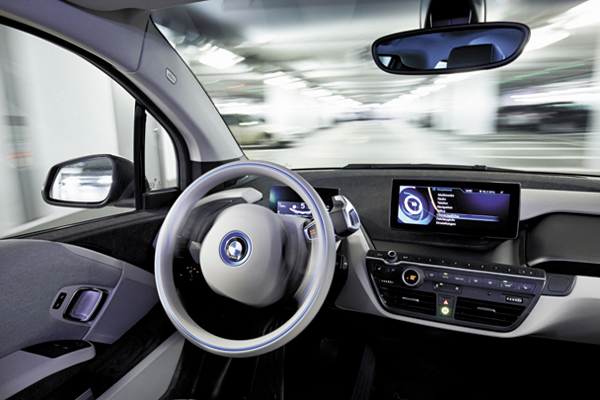 “We were able to provide the future vision and the standard for car IT,” said a spokesman for Hyundai Motor. “We will try to develop more technologies to make cars that can really help humans on the road.”

Automakers also are expected to produce more environmentally friendly cars in 2015. Last year, one of the core trends was developing lighter, more fuel-efficient vehicles without compromising performance. Cars such as Volkswagen’s SUV Tiguan 2.0 TDI BlueMotion (13.8 kilometers per liter, 40 miles per gallon) and Kia Motors’ K3 small sedan (14 kilometers per liter) became popular. The Tiguan was the leading import in Korea last year, with 8,106 units sold, and the K3 was Kia’s most popular sedan, with sales of 49,303.

The two vehicles reflect the growing popularity of diesel SUVs, which offer better fuel economy than sedans, and small cars.

Many diesel cars such as Kia’s Sportage R SUV and K5 diesel sedan, which is sold in Europe, use turbochargers, turbine-driven forced induction devices that improve fuel efficiency and power by using exhaust energy to breathe more air into the combustion chamber. A turbocharged engine produces more power than the same engine without it and can significantly improve the power-to-weight ratio of the engine. In general, a turbocharged engine generates about 20 percent more power and fuel economy than naturally aspirated engines. By using a turbocharged engine, Ferrari developed the California T, which the company said improved fuel efficiency by 15 percent. 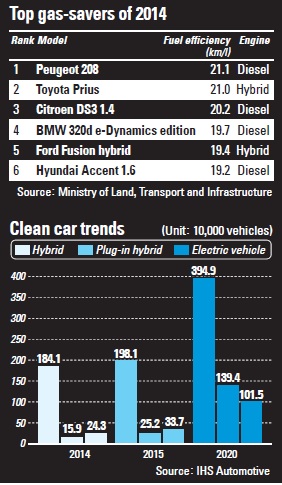 “The turbocharger market has been growing by an average of 11.1 percent annually since 2012,” said Lee Sang-yoon, a researcher at Yuanta Securities Korea. “BMW, Audi, Ford and Land Rover already have been aggressively working on developing turbochargers, with gasoline engines this time. BMW will plant turbocharged engines in its 3 and 5 Series as well as the i8, an EV. Only about 30 percent of vehicles in the world use turbocharged engines, but that share will gradually increase.”

In October, Hyundai announced it would replace its 1.2- and 1.6-liter naturally aspirated engines with the Kappa 1.0 turbo GDi engine in small sedans such as the Avante, Accent and i30. The 1.0-liter, three-cylinder turbo engine provides 120 horse power and 17.5 kilogram-meter of torque, which is 20 horsepower less than Avante’s current 1.6-liter naturally aspirated engine, but more torque.

“There is a reason Hyundai Motor decided to adopt the turbocharged Kappa on its global best-seller Avante,” said car columnist Han Chang-hee. “They obviously want to secure their customers in the small-car market, the biggest market for the company, by offering better fuel economy and dynamic performance.” 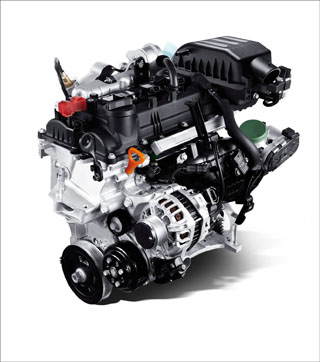 Hyundai Motor will use its Kappa 1.0 turbo GDi engine to improve fuel economy in the Avante, Accent and i30 small sedans. Provided by the company

Other than Hyundai, Renault Samsung’s SM5 TCE sedan and Mini Cooper also will use turbocharged engines.

Looming over the race to improve efficiency is cheap oil and a lack of infrastructure, but both foreign and Korean automakers will introduce hybrids and plug-in hybrids (PHEVs) this year.

According to IHS Automotive, the environmentally friendly market will expand from last year’s 2.25 million to 6.37 million units by 2020, and 60 percent of them will be hybrid cars. It also estimated the number of plug-in hybrids will jump from 160,000 to 1.39 million over the same period.

The Environment Ministry said on Dec. 31 about 6,000 EVs will be on Korea’s roads this year, as 3,000 additional EVs are expected to be registered. The ministry cited a government subsidy of 15 million won ($13,600) to EV buyers and an additional 1 million won offered by local governments. The ministry said it also expects the country’s infrastructure for EVs to improve, because major conglomerates such as GS Caltex, SK Networks and KT are considering launching related businesses, including charging stations and EV rental services.

The Korean government is eager to expand the EV industry as part of the nation’s Smart Grid system.

With growing demand for environmentally friendly cars and attractive government subsidies, automakers are trying to expand their lineups in the segment. Hyundai Motor introduced its new Sonata hybrid in December and plans to introduce a Sonata plug-in hybrid this month.

“We are preparing to sell a fuel cell electric vehicle [FCEV] in Korea,” he said. “With the government, we are discussing improving the nation’s overall infrastructure, for instance, building more charging stations.” With the Tucson ix in 2013, Hyundai Motor was the first company in the world to start mass production of FCEVs.