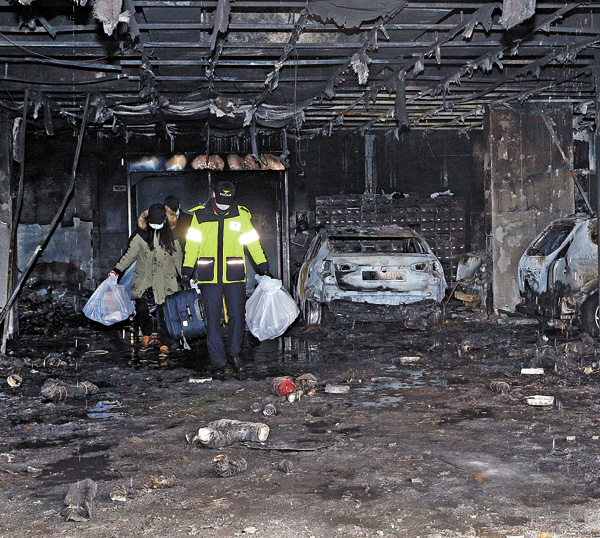 A police officer helps a resident retrieve her belongings Sunday in Uijeongbu, Gyeonggi. By Kim Sang-seon

A fire that spread through three apartment buildings in Uijeongbu, Gyeonggi, on Saturday morning has killed at least four people and injured 124, authorities said.

Among the injured, 78 were hospitalized, 14 were in critical condition and 46 were discharged as of noon Sunday, according to a task force jointly run by officials from Uijeongbu City, police officers and the Ministry of Public Safety and Security.

The patients are currently being treated in 15 different hospitals in Uijeongbu, Seoul and Gangwon. 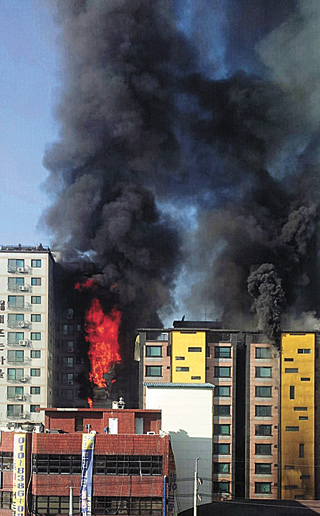 Thick smoke rises from the scene of a fire in Uijeongbu, Gyeonggi, 27 kilometers north of Seoul (17 miles) on Saturday morning, leaving four dead and 124 injured as of press time Sunday. [NEWSIS]

The task force said Sunday morning that 226 people lost their homes in the blaze.

Out of this number, 42 stayed in a gym on Saturday night at Gyungeui Elementary School, a makeshift shelter that Uijeongbu city office set up 1.25 kilometers (about 1,360 yards) away from the scene of the accident.

The fire initially broke out at around 9:15 a.m. Saturday in the above-ground parking lot of the 10-story Daebong Green Apartment building in downtown Uijeongbu when a motorcycle that seemed to belong to one of the residents caught on fire, the city’s fire department said.

The blaze spread to other vehicles in the parking lot because of strong winds, according to the Uijeongbu fire department, burning all 12 parked cars. It quickly climbed up the outer wall of the structure before affecting two other apartment blocks - one 10-story building at 9:55 a.m. and one 15-story building at 10:15 a.m., the fire department said.

Four helicopters and 160 firefighters were sent to the scene, with the first fire truck arriving at 9:33 a.m. But authorities said they had a tough time getting to the location because the road leading to the buildings was too narrow for the fire truck to drive through.

During that time, the flames obstructed the main doorways on the first floors and smoke billowed up inside the buildings. Most of the trapped victims evacuated to the rooftops and waited for helicopters to rescue them.

Others who lived on the lower floors jumped out of their windows or climbed down the outer walls before firefighters arrived at the scene.

The blaze was extinguished almost two and a half hours later at 11:44 a.m., Uijeongbu firefighters said.

It remains unclear precisely how the motorcycle caught on fire, but police said they have CCTV footage of a person “touching the driver’s seat for about a minute and a half” and entering the apartment building soon before the flames arose.

The individual, who local media identify as a 55-year-old man surnamed Kim, is reportedly in an intensive care unit and is being investigated by the police for arson.

According to local safety experts, the fire’s rapid spread in the first two apartment buildings was caused by the absence of fire sprinklers.

The other 15-story apartment block, which was the last to come into contact with the blaze, did have sprinklers, but they began to function later because the fire began on the structure’s outer wall, an official with the Uijeongbu fire department said.

Another official from Uijeongbu City Government said domestic fire laws stipulate that only buildings with 11 floors or more must install sprinklers, implying that the builders of the two 10-story blocks had followed protocol.

Residents who successfully fled from the fatal scene are contradicting one another about whether the fire alarm rang properly that day.

“I heard a fire alarm from the third floor and evacuated through the stairway,” said a 29-year-old woman surnamed Kim.

“But I can’t remember whether the sound was a fire alarm or the sirens from a fire truck,” she added.

Another resident, who asked for anonymity, said, “I didn’t hear a fire alarm, but I think I saw a warning light in the corridor.”

A 22-year-old female surnamed Kim, who lived on the ninth floor of the first 10-story building to go up in flames, said, “I didn’t hear anything like a fire alarm or an evacuation announcement,” adding that she fled her home after hearing people screaming outside.

Kim Seong-hee, 33, who lived on the seventh floor of the 15-story apartment building furthest from the starting place of the initial fire, said she “woke out of bed by a loud thumping sound” and that there “was no such thing” as a fire alarm or an evacuation announcement. The police said they have yet to confirm whether the fire alarms functioned in any of the three buildings that Saturday morning.

Another reason the blaze got so out of control, argues Baek Dong-hyun, a professor at Gachon University in Seongnam, Gyeonggi, is because the buildings were constructed closely to one another, which isn’t rare or illegal in this country, he says.

“There’s also a possibility that the fire spread so rapidly due to construction materials that weren’t coated with a flame retardant,” said Baek.