Foundations founder due to a lack of interest

Foundations founder due to a lack of interest

The Dongwon Education Foundation, established by ocean-industry conglomerate Dongwon Group in 1979, is going through difficult financial times and some of its social services are on a verge of being shut down.

Following the law, the foundation’s main source of the funding is from interest on deposits in local banks. As interest rates fell, so did its income.

“We have been providing scholarships to students from the interest on a 1 billion won deposit,” said Choi Soon-ok, a manager of the foundation. “When we first started this project, we were able to provide scholarships to 10 college students, about 2.5 million won per each semester. Now we can only help five to six students.”

Dongwon is not alone. The Paldo Kkokomen Scholarship Foundation, which was founded by ramen manufacturer Paldo and comedian Lee Kyung-gyu, is also suffering from low interest rates. The foundation’s scholarship fund is about 500 million won. 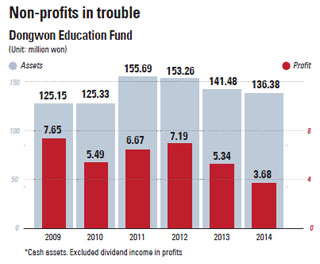 “We put our assets into deposits in the bank and give scholarships from the interest on those deposits,” said an official from the foundation. “Even if we add more money coming in from ramen sales, it’s hard to increase the principal and maintain our plan of helping 70 beneficiaries.”

Under the law, nonprofit foundations or public service foundations have to fund their activities from their own assets. Most get dividends from stocks, rent from real estate or interest on bank deposits. To raise income in other ways, they need to get approval from the government, and the process is difficult.

But as the low-interest era continues, smaller foundations are shutting down and large nonprofits are asking for help.

“We can probably maintain our business if the interest rate stays around 3 percent, but since this year’s rate has fallen to 2.2 percent, we are considering downsizing the number of scholarship recipients,” said a spokesman from another scholarship foundation that has been supporting 300 students annually.

“We have to get more donations or shrink our social services.”

The problem is that companies, which have been the main source of donations, are less generous as the economy muddles along. 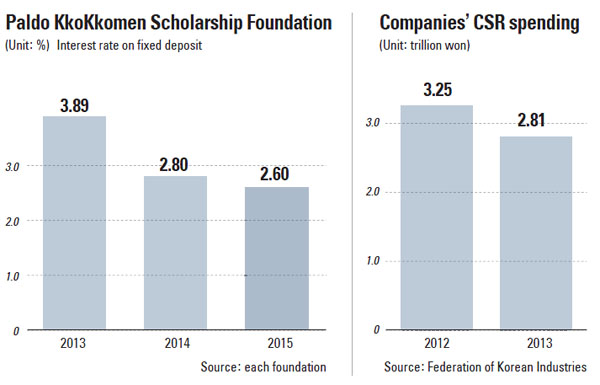 According to the latest data from the Federation of Korean Industries, which represents Korea Inc., 234 companies have spent 2.81 trillion won for corporate social responsibility (CSR) related activities in 2013, which was a 13.6 percent decline from 2012. The biggest reason for reducing CSR spending was underperforming businesses.

The situation is no different for financial companies whose forte is asset management. Shinhan Scholarship Foundation, which runs a 100 billion won fund that is supported by Shinhan Financial Group’s seven affiliates, said its profitability is also declining.

“We also rely on interest coming from deposits,” said a spokesman for the fund. “We invested a very small portion of the fund in derivatives after getting approval.”

Originally, the regulations on funding for nonprofit foundations was designed to protect their assets - and to maintain their services to society. But as it backfires in an era of unusually low interest rates, some are claiming there should be a revision in the law.

“If we just maintain the current system, some foundations may have to shut down,” said Dongwon Group Vice Chairman Park In-gu.

“By looking at what other advanced countries have gone through, we should allow foundations to use some of their assets directly, not just the interest on the assets. There needs to be a revision in the way nonprofit foundations should manage their assets.”