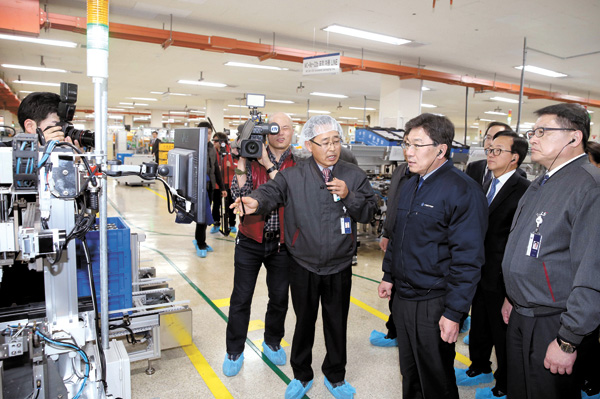 Trade Minister Yoon Sang-jick, right, listens to a briefing at the LS Industrial Systems plant in Cheongju, North Chungcheong on Wednesday. Provided by the ministry

Production line workers are rarely seen at a three-story factory located in the heart of Cheongju industrial complex, in North Chungcheong. They’re not needed. The production sounds that fill the air are all made by machines and robots.

The only humans you see are a couple of workers in white coats roaming between the robots, checking monitors that display the numbers of parts being spit out.

A cart robot collects the parts and brings them to another corner of the floor, where they are assembled to make an automated electricity control systems. The completed unit is transferred to another section to be tested and packaged.

The entire production process is done inside one factory building - with almost no human assistance. A few people sit in a control room full of screens showing how the machines and robots are working.

Smart factories are production lines at manufacturing companies where most of production is automated thanks to robots and ICT technologies.

LSIS says it’s getting through tough economic times by boosting its efficiency through automated production lines at its smart factory in Cheongju, North Chungcheong.

“Because each facility automatically operates and controls its operation, production is fast and precise,” said Kim Joong-young, a manager at the LSIS Cheongju factory. “About 20,000 completed units of 38 different electricity control-related products are produced at this smart factory every day without delays. Our production here is automated up to 95 percent.

“The system is not just productive but also energy-efficient, saving us power costs of as much as 60 percent,” Kim added.

LSIS’s Cheongju factory, which mainly produces fully-automated electricity control systems and production robots for other factories, is equipped with the nation’s most up-to-date automated production technologies. The entire production procedure, from demand estimation to orders production and shipments, is automated

Yoon Sang-jick, minister of trade, industry and energy, visited the Cheongju factory last Wednesday with other officials from the ministry and major business lobby groups, to see for himself how ICT integration in traditional manufacturing can enhance productivity.

Yoon named boosting production efficiency as his most important goal this year.

“After we started operating this smart factory, we have seen great improvement in productivity while defective parts rarely appear,” Koo Ja-kyun, Chairman and CEO of LSIS, told Yoon. “With the fully-automated system, we end up with only 97 defective parts out of 1 million units.”

Others in Yoon’s delegations said they hope that small and midsize companies will be the major beneficiaries of automated production systems.

“The smart factory system will be a big help to the small and midsize companies in reducing production costs by producing more and having fewer defective products,” said Lee Dong-geun, standing vice chairman of the Korea Chamber of Commerce and Industries.

The visit followed a Ministry of Trade, Industry and Energy announcement in early January at its annual briefing session for the Blue House that the ministry will form a joint fund worth about 1 trillion won ($929 million) to help factories nationwide equip themselves with smart factory systems. Most of them are small and midsize companies and suppliers to chaebol manufacturers.

This year the government will start supplying automated production systems to six companies doing business in the so-called “root manufacture industry,” which refers to molding, minting and welding.

In industries like auto and pharmaceuticals, in which all production and distribution is done under the leadership of a conglomerate, the chaebol companies will take the lead in investing in automating their factories. The government will participate in the process by easing regulations and cutting out paperwork.

“We will extend the initiative to Korea’s industries like steel, chemicals and semiconductors so that our flagship industries can boost productivity with better energy efficiency and less production costs,” said Yoon.