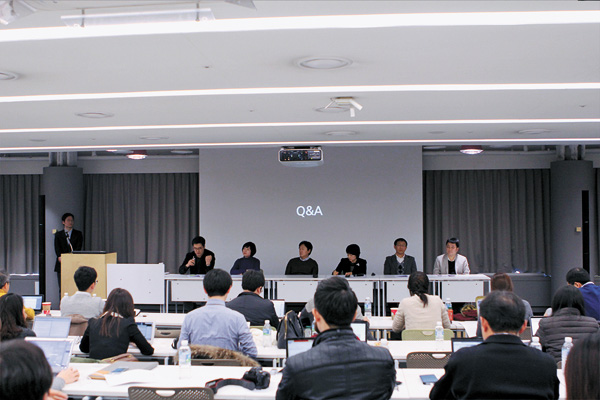 Naver, the nation’s largest portal, holds a Q&A session, after announcing it will launch mobile payment system Naver Pay during the first half of this year and reinforce mobile shopping search at a press conference held at Naver Partner Square in Yeoksam-dong, Gangnam, southern Seoul. Provided by the company

Naver is trying to finally crack the mobile business, which it admits has been its Achilles’ heel.

Naver is the largest search engine and portal in the country. However, as people steadily shift away from PCs to access the Internet, Naver has been seeking new businesses in the mobile sector.

Naver said Tuesday it is introducing a one-stop mobile shopping platform in the first half of this year that forecasts the needs of users and reflects them in search results. It hopes users will shop and pay for goods using its payment system Naver Pay.

“Everyone knows that Naver is not No. 1 in the mobile business,” said Han Seong-sook, head of Naver’s services departments, at a press conference at Naver Partner Square in Yeoksam-dong, Gangnam, southern Seoul Turesday. “Naver lacks content and sharing functions, which are the most important component in mobile. We have a sense of urgency.”

Social networking services such as Google and Facebook are also competing in the mobile shopping market to compete with Amazon, Alibaba and eBay.

Naver said it will use an Shopping Trend Graph algorithm that shows relevant information about shopping in search result and the algorithm can predict the users’ interests.

Around 34 percent of keywords in Naver searches are already shopping related.

From now on, when users access Naver on mobile devices and type in shopping-related keywords, they can check sale information, trends and brands in the search results.

For instance, if users type in the keyword “sweater,” they can compare sweaters by popular brands and it helps the users move to shopping malls that sell the products with discounts.

It will also provide information on trendy sweaters of different designs and new materials or those that have been discussed on TV programs or commercials.

It is also planning to help users choose products by showing reviews by experts and other consumers.

“This year will be an important time for figuring out how to streamline search results and the shopping business in mobile,” said Han.

While taking advantage of its strong search engine along with the infrastructure of affiliated stores, it will also introduce Naver Pay, which incorporates its current quick payment system Check Out and mileage service Naver Cash.

Through Naver Pay, users can make payments or transfer money with a Naver ID.

“We are securing 40,000 online stores and have 15 million users who have used Check Out, so we have advantages over other services in terms of familiarity and usability,” said a spokesman for Naver.

Currently, the company is discussing with card companies and banks introducing the Naver Pay system. It plans to launch it in the first half of the year.

It will minimize the risk of fraudulent transactions by introducing a Fraud Detection System, which detects unusual buying patterns.