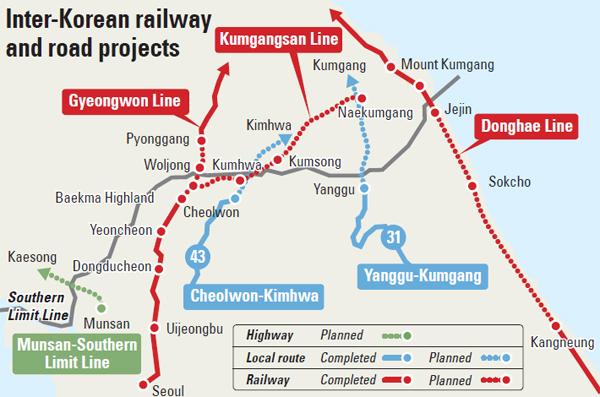 The Ministry of Land, Infrastructure and Transport said Tuesday it will push forward a project this year to restore severed sections of inter-Korean railroads and highways.

The project was announced as part of the ministry’s 2015 agenda. It is also part of the Park Geun-hye administration’s ambitious proposal to operate trains from Seoul to cities in the North this summer in celebration of the 70th anniversary of Korea’s liberation from Japan’s colonial rule - but only if Pyongyang goes along.

Earlier this month, the Ministry of Unification unveiled a plan to restore the two Koreas’ western and eastern railways to operate trains this summer from Seoul to the North Korean cities of Rajin and Sinuiju. Unification Minister Ryoo Kihl-jae has said the goal is to link the railways and have trains operating in time for the Aug. 15 Liberation Day.

While the Park government is optimistic that Pyongyang will accept the offer, North Korea has yet to even respond to the proposals. Despite the North’s silence, the Transport Ministry announced Tuesday it will push forward the project by restoring missing sections of railways and highways in the South to the inter-Korean border.

It will conduct a site survey to restore the 10.5-kilometer (6.5-mile) section of the Gyeongwon Line between Baekma Highland and the Southern Limit Line.

Located at the southern edge of the demilitarized zone, the Southern Limit Line is about two kilometers away from the military demarcation line between the two Koreas.

The ministry will continue to work on a project to build a highway between Seoul and Munsan by 2020 and will conduct a design survey this year to continue the road from Munsan to the Southern Limit Line.

The ministry also said it will conduct preliminary feasibility studies for more cross-boarder road projects. Local routes 31 and 43 originally linked the two Koreas, and the ministry will conduct feasibility studies on restoring the 10.5-kilometer section from Yanggu County to the Southern Limit Line and a two-kilometer section from Cheorwon County to the Southern Limit Line.

The two Koreas restored the severed segments of the western Gyeongui Line and the eastern Donghae Line and operated trains in trial programs in May 2007. No further progress was made during the Lee Myung-bak administration and the two cross-border railways were never put into actual use.