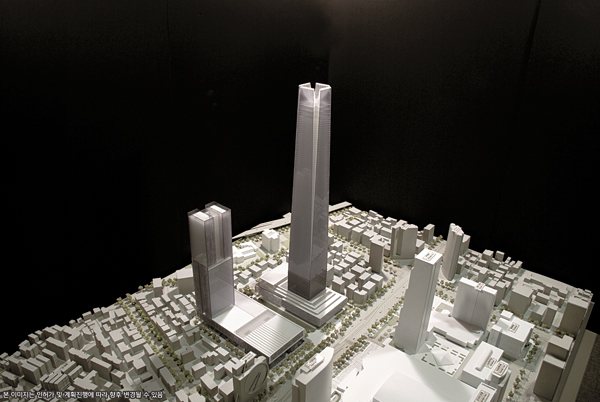 Hyundai Motor Group began negotiations with the Seoul city government over the construction of a 115-story headquarters at the Samseong-dong plot in Gangnam it purchased from Korea Electric Power Corporation (Kepco) for 10.55 trillion won ($9.6 billion) last September.

According to the city government Sunday, Hyundai Motor has submitted a plan to build the highest building in the country at 571 meters (1,873 feet), 16 meters higher than the Lotte World Tower.

Currently, the country’s highest skyscraper is the North East Asia Trade Tower in Songdo, Incheon, according to the Ministry of Land, Infrastructure and Transport.

That building, which was finished last July, has 68 floors and is 305-meters high. Offices occupy the first 35 floors, and the remaining floors are used as a hotel and for restaurants.

The world’s fifth-largest automaker said it wants to build a landmark dubbed the Global Business Center at the Kepco site in Gangnam when it purchased the land last year.

Hyundai E&C, the construction affiliate of Hyundai Motor Group, reportedly gave a presentation about the project to overseas construction companies on Dec. 18. It is holding a design competition among U.S. architects such as SOM and KPF.

Around 30 Hyundai affiliates will be moving into the headquarters. Hyundai said it designed the building 10 stories higher than an existing plan of 105 stories because it decided to also move safety management personnel to the Samseong-dong office.

By creating a landmark, Hyundai said, it will help Seoul development of the MICE industry, which stands for meeting, incentives, conferences and conventions.

Seoul city has announced a development plan for an International Exchange Complex in the area that extends from COEX in Samseong-dong to the Kepco plot and Jamsil Baseball Stadium in Jamsil, Songpa-district in southeastern Seoul.

In particular, Seoul will use around 15,000 square meters (3.7 acres) at the Kepco site to create core space for the MICE industry.

While the Finance Ministry recently announced it will allow the construction to begin in the second half of next year as part of its investment promotion policies, the city government is expected to take a slower approach.

“Seoul city will be reviewing the proposal regarding the construction permit,” said a spokesman for Hyundai Motor Group. “We are looking forward to starting the construction as soon as possible after receiving the permit and paying the balance in September.”

“Through active cooperation with Hyundai Motor Group, we will establish sustainable development initiatives as soon as possible to further strengthen global competitiveness of Seoul city,” said Kwon Hae-yoon, who is in charge of southeastern public development promotion at Seoul City government.

Hyundai Motor Group announced last month an investment plan of 81 trillion won through 2017. It will pour 11 trillion won into construction of its Global Business Center.

The company said it is expecting to generate 4,225 jobs with the construction.

With those investments, the automaker is expected to avoid government taxation on its reserves in accordance with the amendments to the Corporate Tax Act.

The amendment states that the government will slap a 10 percent tax on excessive reserves, which should be spent on wages or investment or distributed to shareholders as dividends.

The law is meant to encourage investments.