The daughter also rises - even at LG Group

The daughter also rises - even at LG Group 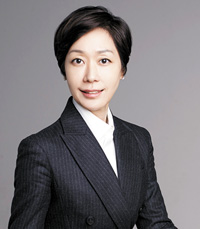 Among Korea’s tycoon class, the family that controls LG Group is known to stick to very conservative traditions. The chairman position goes to the oldest son, and the women in the family are not involved in the group’s businesses.

There are even stories that wives or daughters in the family are scolded by their male relatives if they get too boisterous while playing golf at Konjiam Country Club in Gwangju, Gyeonggi, which is owned by LG.

But the glass ceiling at LG has finally cracked. According to Our Home, a food company in the group, Executive Director Koo Jee-eun was promoted to vice president on Monday.

After earning a bachelors degree in business from Seoul National University, Koo Ji-eun earned a masters degree in human resources from Boston University. She then worked as a consultant at the Samsung Human Resource Development Institute and Watson Wyatt Korea.

Since she started working at Our Home in 2004, Koo has launched many new products and showed a talent for finding new business opportunities. She reportedly played a major role in helping the company boost its revenue from 500 billion won ($454 million) in 2004 to 1.3 trillion won last year.

When she managed the company’s food materials purchasing business, she developed good partnerships with global companies such as

Campbell’s Soup and sold imported food materials in the domestic market. That led her division to see growth of 200 percent in revenue in the last two years. Her impressive résumé has forestalled any complaints within the family about her rise.

Koo also personally owns a 20.67 percent stake in Our Home shares. She is the only daughter involved in Our Home’s business.
Industry insiders say Koo was influenced by her mother, Lee Sook-hee, the elder sister of Samsung Group Chairman Lee Kun-hee.

“Samsung has a different family tradition that allows female relatives to get involved in the group’s business when they show potential,” said an industry source. “It looks like Samsung’s tradition, taught by her mother, helped her to settle in as a businesswoman.”