Samsung Electronics is known for keeping its guard up even when its smartphone business thrives. Chairman Lee Kun-hee often stresses the need for continuous innovation, once telling his employees not to be afraid to overhaul everything other than their wives and children.

Today the tech giant faces one of its biggest challenges ever. Despite high hopes early last year for the Galaxy S5, the diminishing popularity of the smartphone “king” had a major impact on its performance in the second half.

Even in one of its biggest markets, China, Samsung has lost ground and now ranks third after China’s own Xiaomi and old rival Apple.

According to Statistics Analytics, in the fourth quarter Xiaomi took the top spot in China with a 12.8 percent market share, followed by Apple (10.9 percent) and Samsung (9.8 percent). Apple’s iPhone 6 and iPhone 6 Plus have been big hits with Chinese consumers.

There are growing concerns that Samsung could replicate the demise of once-dominant Nokia.

Bae Eun-joon, a senior analyst at LG Economic Research Institute, says that is likely. However, Bae pointed out the rapid changes in the smartphone ecosystem in a report on so-called hidden strong players. 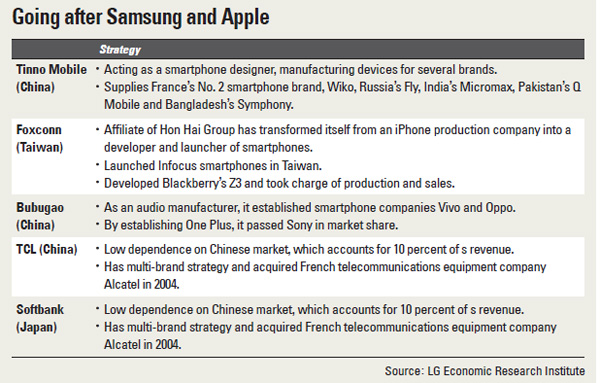 According to his analysis, smartphone brands are no longer manufacturing, with market entry barriers lowered, Google distributing the free Android operating system and semiconductor companies selling application processors, the brains of smartphones.

There are even companies that assemble and supply semi-finished smartphones with software that the customers choose.

Competition has changed completely, with small and medium manufacturers able to launch a smartphone by hiring one or two engineers.

The five most notable companies chasing Samsung Electronics behind the scenes are the “local kings.” They are not visible in terms of global market share and seek strategies that avoid competition and attention.

The French brand Wiko is a smartphone company established three years ago. However, its market share exceeds 10 percent in France, surpassing Apple.

In Russia and Ukraine, smartphone leader Fly has grown rapidly in the past few years.

And behind these companies there is Tinno Mobile of China, a design house that develops and produces smartphones for 13 companies with market shares of more than 10 percent in five countries. It partners with Wiko, Fly, Micromax, Q Mobile in Pakistan and Symphony in Bangladesh.

Tinno Mobile has already been ranked in the world’s top 10 smartphone makers in 2011 as it sold 14 million units that year.

“Last year, Tinno Mobile already has sold 50 million units and it was ranked as the world’s seventh-largest smartphone maker,” said the analyst.

“As Tinno Mobile holds 95 percent of Wiko shares, it has already entered the brand competition.”

China’s Bubugao is also a hidden player, but its capacity is formidable. Bubugao, which was an audio manufacturer, entered the smartphone business in 2011 and established Vivo and Oppo.

Vivo is the sixth-largest smartphone maker in China and Oppo is No. 7. Bubugao did not stop here, starting One Plus through Oppo in order to chase after Xiaomi. 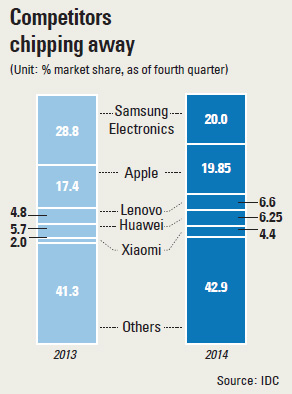 Chinese company TLC, which acquired French telecommunications equipment company Alcatel in 2004, is limiting its dependency on its home market. China sales are 10 percent of its total revenue.

It is focusing on Europe and South America, where Alcatel’s brand awareness is high. It uses its own brand name in China. TLC created a foundation for rapid growth by hiding behind a proven brand.

Foxconn is well known as a company that manufactures devices for Apple. As an affiliate of the Taiwanese Hon Hai Group, it launched a smartphone under the InFocus brand.

Seen as the low-cost model that will compete with Xiaomi, it succeeded in securing 6 percent of the Taiwan market.

“So far, Foxconn said it won’t launch its own smartphone to avoid any conflict with its customers, but it is moving toward the smartphone business with the launch of InFocus,” said an analyst at the institute.

Japan’s Softbank also is recognized as a strong player in the “others” category. 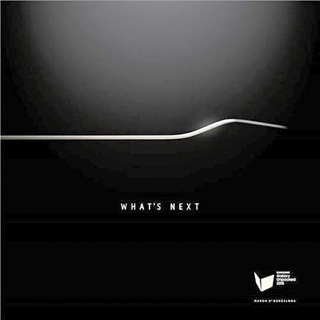 Samsung Electronics’ invitation to the unveiling of its flagship Galaxy S6 on March 1 in Barcelona, Spain.

It is taking a different approach by acquiring U.S.-based telecommunications holding company Sprint and the Indian IT retailer Beetel last year.

Meanwhile, Samsung Electronics said Tuesday it will unveil its next flagship model, the Galaxy S6, on March 1, a day before the opening of the Mobile World Congress.

Samsung Electronics has started distributing invitations for the Samsung Galaxy Unpacked 2015, which shows a thin silver curve on a black background with the quote “What’s Next.”

Market watchers say the silver curve could indicate a metal frame for the S6. Samsung also will launch the Galaxy S6 Edge that will have edge displays on the two vertical sides of the device.

As the company experienced an earnings shock due to the sluggish sales of its Galaxy S5, it is drawing attention whether the new flagship Galaxy series will be able to save the company’s mobile business.