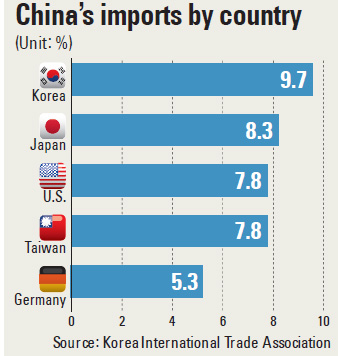 Korea remained the biggest exporter to China for the second consecutive year, outrunning major competitors like Japan and the United States thanks to strong demand for Korean industrial products, including computer chips and automotive parts.

But analysts said the relatively low volumes of Korean consumer products shipped to China, including fashion goods like bags and shoes as well as cosmetics, demonstrates that more work needs to be done to capitalize on the popularity of Korean pop culture, also known as Hallyu or the Korean Wave.

According to data released by the Korea International Trade Association (KITA) on Tuesday, China imported about $1.96 trillion worth of products last year and about $190 billion - or about 9.7 percent of them - were from Korea.

Japan took the second spot with $162 billion while the United States took third place with $153 billion. Taiwan ($152 billion) and Germany ($104 billion) were also in the top five countries that China imported from.

Korea became the No. 1 exporter to China for the first time in 2013 with a share of imports of 9.2 percent, beating rival Japan’s 8.2 percent, and was able to enlarge the gap this year. Japan accounted for 8.3 percent of China’s imports this year.

KITA said China’s rapid growth in electronics and machinery industries had an impact on the figures. China’s biggest import from Korea was semiconductors, at $50.1 million worth, a 10.8 percent rise from a year ago. That’s about 25 percent of all imports from Korea.

KITA said that the popularity of Korean products grew in the past few years thanks to the Korean entertainment industry led by K-pop boy band Super Junior and TV dramas like “My Love From the Star.”

But KITA said Korea has yet to develop a stable position in China’s consumer products market. In other words, it’s still shipping components rather than finished goods consumers desire.

Even though the figure is rising, so is competition from Chinese suppliers of components and parts. China has been expanding production in the nation’s major industries including displays, petrochemicals, shipbuilding and machinery.

“Increasing figures in the processing trade reflect that many Korean companies have missed out on China’s domestic market, which is growing fast,” said Choi Yong-min, head of KITA’s Beijing branch. “Rival companies throughout the world are trying to expand their market share in China’s consumer goods market. The government needs to provide policies and businesses need new marketing strategies to truly exploit the Korea-China FTA.”