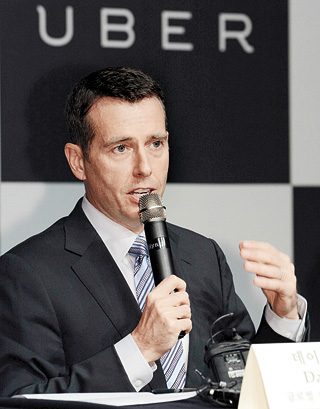 David Plouffe, vice president of Uber, at a press conference at the Grand Hyatt Seoul hotel on Wednesday. Provided by the company

Uber, an app-based cab service that has had a bumpy beginning in Korea, proposed hiring drivers approved by the government in an attempt to reduce conflicts with the Korean government.

David Plouffe, senior vice president of policy and strategy at Uber and a former White House adviser to U.S. President Barack Obama, said Uber plans to propose registering Uber drivers with the government. Plouffe revealed the company’s plans at a press conference at the Grand Hyatt Seoul in Yongsan District on Wednesday.

Concerns over the safety of Uber’s ride-sharing service have mounted after a series of sexual assaults in Boston and New Delhi, raising questions about Uber’s management of its drivers.

Uber said such worries would be resolved to some extent through a registration system.

“When the government adopts the registration system, the drivers will be bound to receive a certain amount of education,” Plouffe said. “With regards to safety, through strict background checks of criminal records and drunk driving, those drivers who might cause troubles won’t be able to drive for Uber.”

Plouffe added that along with the registration scheme, it plans to provide insurance protection for its passengers.

The press conference came amid mounting pressure from local taxi drivers and the government to crack down on the ride-sharing service in Korea.

Uber has stuck to its aggressive business expansion despite warnings by the government and the Ministry of Land, Infrastructure and Transport, extending its business outside of Seoul to Incheon.

The company launched Uber Black, a limousine service, in August 2013. At the end of last year, it also launched its Uber X service, which allows individual vehicle owners to work as Uber drivers.

The conflict between Uber and the Seoul city government in conjunction with the Land Ministry intensified after Seoul announced it would give rewards to paparazzi who report Uber cars in the city last month.

However, Plouffe declined to reply to a question as to whether Uber is willing to pay income tax in Korea and about specific cooperation measures with the Korean government.

“We are seeking a partnership with the government and to come up with a resolution,” Plouffe said.

Around 120 taxi drivers gathered in front of the Grand Hyatt Seoul hotel in central Seoul around 10 a.m. yesterday to demand that the government crack down on Uber services.

They held a press conference and said taxi drivers will never cooperate with Uber. They condemned the visit by Plouffe, whom they accused of attempting to expand the service through political means.

“Uber is a company that will destroy the whole taxi business and they must stop their business in Korea,” said a spokesman for the Seoul Taxi Transportation Business Association. “It is also in violation of the Passenger Transport Service Act, which bans rent-a-car businesses and private cars from providing passenger transport for compensation or engaging in brokering activities.”