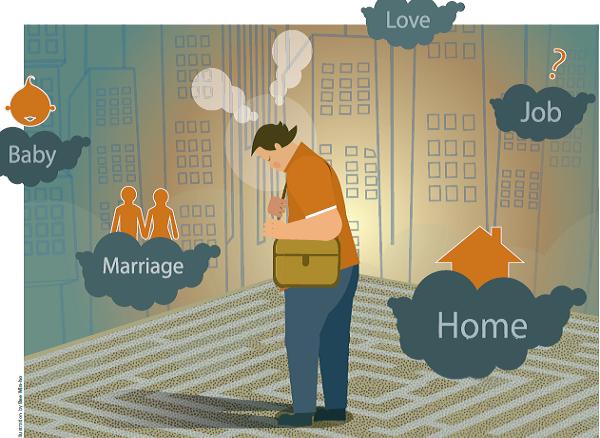 Kwon Mun-hyuck, a 31-year-old salesman at a prominent automaker here, did not visit his family over last week’s Lunar New Year holiday.

For the past 12 years, he’s lived alone in a small studio in northern Seoul, and his single largest interest now is to build up as much savings as he can in the hopes of forgetting about the past five years.

“I’m willing to consider myself part of the opo sedae,” he said, referring to a term that has emerged to describe Koreans in their 20s and 30s who have given up on love, marriage, children, a good job and the possibility of a house.

“It’s been a long time since I stopped thinking about hanging out with a girlfriend or getting married,” he added. “I don’t want to meet my parents or cousins this holiday because they’re surely going to ask me about a marriage plan.” 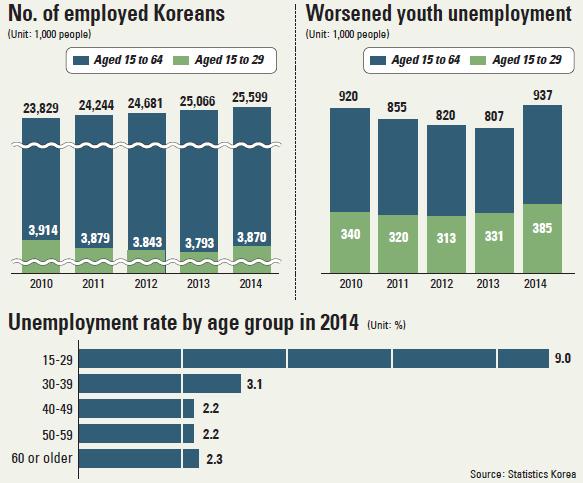 And because young people like Kwon are also struggling to find decent jobs, they give up on other aspirations that cost a lot of money.

Even though he now has a regular job that satisfies him, the job search over the past five years took a serious toll.

“After graduating from college at 25, I wrote as many as 100 resumes and went through dozens of interviews each year for as long as five years,” he said. ” I had a girlfriend but we broke up because of mounting stress because I kept failing to land a job.”

As Kwon got older, he knew he couldn’t continue to live off his parents, so he applied for part-time work serving at restaurants and delivering pizza in order to put food on the table.

Finally in 2013, he landed a position at a small auto-parts manufacturer and successfully moved into his current job last year.

“I feel lucky, but I’m not optimistic about the future,” Kwon said. “I am not making so much money that I can start to paint a rosy picture. I am still repaying my college loans, and getting married or having children is just wishful thinking.”

But his story is no exaggeration and has slowly become a sad reality for young Koreans, who have had little luck traversing the job market at a time when structural economic problems have come to a head.

Compared to just three years ago, the situation for young people now is much worse. At the time, most just considered giving up on love, marriage and children. Now, they are being forced to give up much more.

In an effort to reassure them and elaborate on his economic plans, Finance Minister Choi Kyung-hwan met with about 20 college students late last month at a local bar near Hongik University in northwestern Seoul.

“There were no problems finding a job when we were students even though many students in the past were engaged in demonstrations and weren’t studying hard,” he said. “I feel really sorry to hear about the current situation, and I’ve asked the members of the Korea Chamber of Commerce & Industry to hire more regular employees.”

The minister highlighted the high youth unemployment rate as one of his key concerns, which will be the main focus of the government’s structural reform plans set out for this year, Choi added.

At the center of the issues affecting young people lies the youth unemployment problem, which has reached a historic peak.

According the latest report by Statistics Korea, the unemployment rate for young people between the ages of 15 and 29 was 9.2 percent as of January, up from 9 percent in December. The rate has climbed from about 7 percent since 2011.

That number is the highest monthly figure since 2000, blatantly indicative of the fact that young people are having a more difficult time finding jobs today than 15 years ago.

Economic growth has slowed over the past few years, and large businesses have increasingly trimmed or frozen their work force.

From 2000 through 2014, the employment rate consistently showed signs of improvement, adding new employment records each year. The story, however, is drastically different when looking solely at youth employment.

Of all documented employees, youths accounted for 15.1 percent as of last year, down from 23.1 percent in 2000, according to the report.

The issue itself is multi-faceted, experts have pointed out, due in large part to multiple structural problems.

“The most unique aspect of Korea’s youth unemployment problem is that young people spend too much time preparing for jobs,” said Kim Gwang-suk, a researcher at Hyundai Research Institute. “While doing so, they extend their time in school, and that costs more money and builds up student loans.”

According to a report by Hyundai Research Institute, the number of young Koreans who are not employed, in school or training stood at 1.63 million as of 2014, accounting for as much as 17 percent of the country’s young population that is supposed to be economically active.

Despite a decrease in the size of the young population, the number of students attending school rose from 3.9 million in 2005 to 4.5 million last year.

“There need to be policies in place that can strengthen the link between education and employment,” Kim said. “Now students study at school but they prepare for job interviews separately as they build up their specifications.”

Lee Seung-min, a 23-year-old university student, admitted that he was too busy to think about going on a date.

“I’m busy with filling up my resume with experience before my graduation next year,” he said. “Community service experience, internships and awards are must-haves to get in to any company in this country.”

Still, there is also a mismatch in the supply and demand of labor as young people avoid small businesses in need of talented workers.

“There are a number of small businesses that are in need of labor, but young people have high standards and they don’t want to be employed by small entities,” said Kim, the researcher. “This avoidance causes a serious mismatch in the labor market.”

To address youth unemployment, the government has carefully approaches its causes. The Ministry of Employment and Labor is also well aware of the issue.

“The fundamental cause is that there are few jobs that young people want,” said Park Eun-jeong, an official in charge of youth employment policy at the ministry.

Under the structural reform initiative, the government is pushing for deregulations in the service industry that could contribute to job creation. Another specific reform initiative would focus on overhauling the labor market, in which regular and irregular workers are treated differently and workers at small enterprises face unfair working conditions.

The government’s youth employment policy has two main parts. On one hand, the government aims to support businesses to improve working conditions. And on the other, it wants to help students prepare for jobs in a more efficient way.

At the same time, the government is also trying to narrow the gap between working conditions at conglomerates and small companies by providing subsidies to hire employees under the government’s guidelines.

Last year, the government launched a dual program for small companies, which allows high school graduates to continue their higher education while working there.

In what was considered a positive reaction, about 2,000 companies applied for the program, according to the Employment Ministry, with more than 1,300 students gaining jobs through the program. This year, the ministry aims to expand the program to 3,000 companies.

“It’s important to help students find their aptitude as much as it is creating new jobs,” Park said. “The government is planning to develop a program this year that helps students recognize their strengths and weaknesses for a particular job, so we can lead them toward what they want to do as they reduce time spent on acquiring certain specifications.”