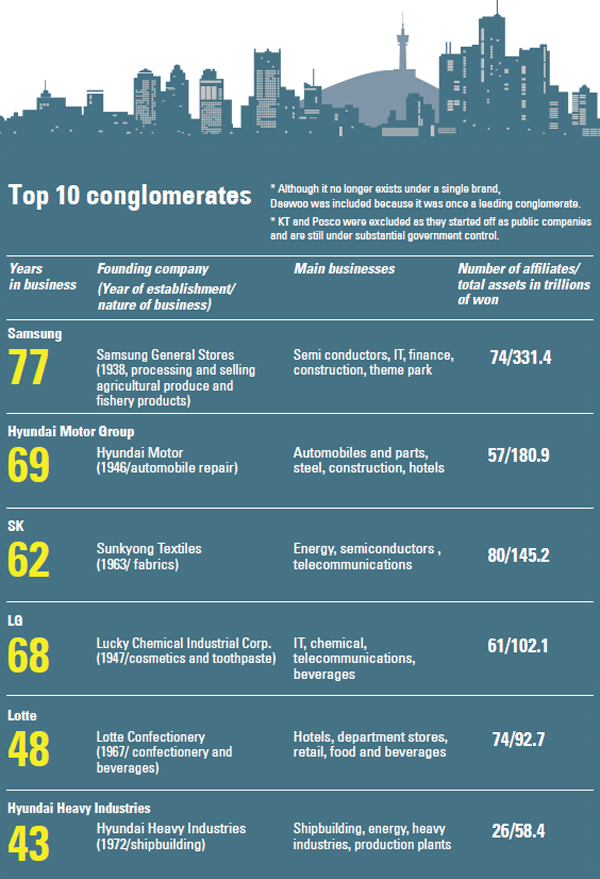 Sixty-nine. That was the average age of Korea’s top 10 conglomerates, based on asset value, compiled by the Fair Trade Commission last year.

The oldest conglomerate in the country was the Doosan Group, at 119 years. The No.1 conglomerate in Korea, Samsung Group, is 77 years old, second-oldest among the top 10. Hanjin, whose flagship is the nation’s largest airline Korean Air, is third at 70. And Hyundai Motor Group is 69.

The youngest one on the list is 43-year-old shipbuilding conglomerate Hyundai Heavy Industries.

Mounting challenges in the global business environment, such as lagging trade, currency wars and internal economic problems have raised questions about whether the strongest conglomerates today can survive. 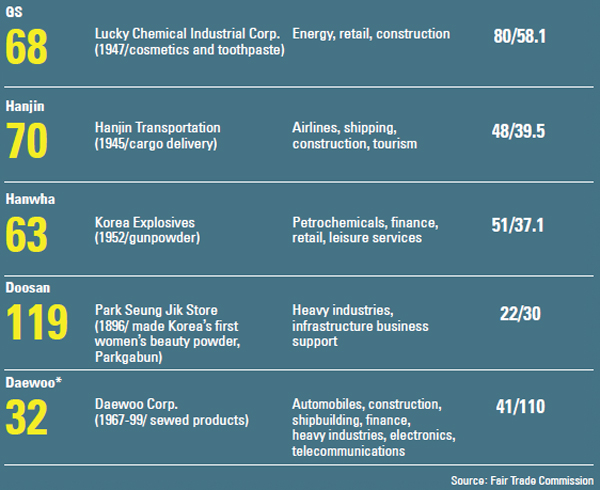 According to Statistics Korea, the survival rate of Korean companies during their first five years is 30.2 percent, meaning nearly seven in 10 are not is business six years after they are established.

In France, the survival rate is more than 50 percent, while in other European countries it is mostly 40 percent or more.

This applies even to conglomerates. Daewoo, which was one of the leading conglomerates and a challenger to Samsung and Hyundai for the No.1 spot, no longer exists today. The conglomerate that was founded in 1967 was forced to shut down and was dismantled after just 32 years. The collapse of Daewoo, which once had more than 40 affiliates under its wing, represents a major downfall for a business empire that is seldom seen in other countries.

That is why the founder and chairman of Daewoo, Kim Woo-choong, has recently accused government bureaucrats of purposely planning to bring down the group.

The government has flatly rejected Kim’s allegations, but regardless of the ongoing arguments, the truth remains that Daewoo Group is no more.

All businesses have the same goal, and that’s to survive.

There are various factors that contribute to the bankruptcy of a business, including falling performance, mismanagement and failure to adjust to the rapid changes in the industry and technology.

But there also are instances where one single dumbfounding mistake brings down an entire business that once thrived. That’s why there’s a saying in Korea that it is more difficult to survive for years than to start a business.

One such company that filed for bankruptcy because of a single mistake was Hanmag Securities. The brokerage firm finally closed earlier this month due to 46.2 billion won ($42 million) in misplaced orders of Kospi options caused by an electronic error.

The struggles of Korean businesses to survive continue today. Companies like Pantech, the nation’s smallest smartphone vendor that once was considered a success story big enough to threaten even the likes of established conglomerates Samsung Electronics and LG Electronics, STX and Woongjin all are on the verge of bankruptcy.

Fortunately, Pantech has drawn interest from a U.S. equity fund investor that wants to acquire it.

While these businesses that used to have conglomerate status undergo corporate restructuring as a means of survival, the market consensus is that it will not be easy for them to regain their past glory.

Only those that have endured such hardships are considered true survivors. According to a study by the Bank of Korea, 5,586 companies in 41 countries had survived for more than 100 years in 2008. Japan had the largest number with 3,146 companies, followed by Germany with 837 companies, the Netherlands with 222 companies and France with 196 companies.

Korea, on the other hand, has only two companies that have survived more than 100 years: Doosan, founded in 1896, and Dong Wha Pharm, established in 1897.

Experts say there is no foolproof method for long-term business survival. Some have survived by focusing on specialization, while others have repeatedly reinvented themselves.

The company that survived the longest without changing the nature of its business was Kongo Gumi in Japan, a construction company that existed for 1,428 years.

The company was founded by a family from the Baekje dynasty that was brought from the Korean Peninsula to Japan to build a Buddhist temple in the year 578. The company participated in major construction in Japan, including the Osaka castle. However, it filed for bankruptcy after suffering from mounting debt and shrinking orders in 2006. The company that acquired the construction company still uses the same banner, but the original Kongo Gumi has fallen to its knees against the change of time.

In the case of Korea, Doosan, the oldest family-run conglomerate, has continuously reinvented itself and found new growth engines. Just a year shy of 120, Doosan started off as a manufacturer of cosmetic products. Today it is one of the world’s leading heavy industry companies. Furthermore, just before the first financial crisis the country faced, Doosan’s main business in the 1990s was beer.

On the back of its main business, which was Oriental Brewery, the company expanded to produce soju.

Eventually it started to refocus its business portfolio to emphasize on the infrastructure support business.

Companies that are long-term survivors like Doosan also have the ability to adjust their business to changing times and new opportunities. Instead of expanding without thorough review, the strategic diversification of businesses has become one of the most important factors in extending the life of companies.

Heads of conglomerates have always warned against staying on the same path in order to achieve longevity in business.

“We have to be well-aware of the reality that when failing to make changes in the ever-changing business environment, a business inevitably will fall behind and to achieve a longevity of more than 100 years and grow into one of the world’s leading companies, one needs to work hard and innovate,” said GS Group Chairman Huh Chang-soo, who also is chairman of the nation’s biggest business lobby group, the Federation of Korean Industries. Huh made the remarks during a strategy meeting with GS Group’s top executives last year.

For Samsung, rapidly intensifying competition from Chinese smartphone manufacturers has become a major concern that threatens the very foundation of the company. Due to the changes and declining sales, Samsung last week even took the step of freezing the salaries of all its employees.

But instead of cutting back, some experts advise Korean companies to be trendsetters and not followers in order to secure their long-term survival.

This has been a weak spot over the years for Samsung Group, which has recently been making some major changes by pushing its own operating systems.

Another factor helping to sustain Korean businesses is expanding overseas, which has been a successful strategy for the nation’s two largest conglomerates - Samsung Electronics and Hyundai Motor Group.

Expanding globally not only increases a company’s consumer base, it elevates the company’s competitiveness by challenging other companies.

“At a difficult time in an economic slump, without changes and innovation, the possibility of survival becomes dimmer,” said Lee Sang-bin, business management professor at Hanyang University. “A company can only survive when it maintains the top competitiveness of its main business and continuously seeks evolution.”