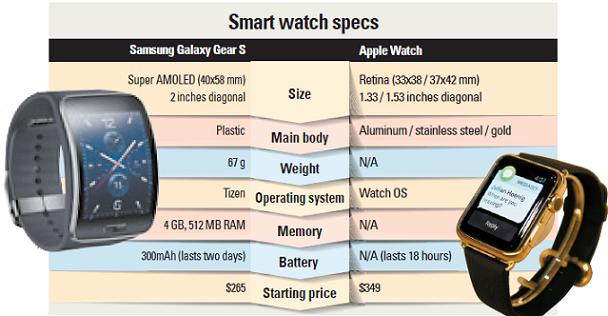 Apple took the wraps off its smartwatch in San Francisco Monday, heralding the start of genuine competition in the new personal tech market against existing products from archrival Samsung Electronics and smaller producers.

The Apple Watch, which CEO Tim Cook dubbed “the most personal Apple device ever,” will be available on April 24 to customers in nine countries or territories that do not include Korea. They are: Australia, Canada, China, France, Germany, Hong Kong, Japan, the United Kingdom and the United States.

Apple will accept pre-orders from its online store, and some retailers and stores will offer previews starting April 10, the day Samsung will launch sales of the already well-reviewed Galaxy S6 and S6 Edge smartphones.

Apple had already revealed a lot of Apple Watch features at an event last September. On Monday, a “real-life” demonstration of the new gadget provided an enhanced sense of exactly how its various functions might work. 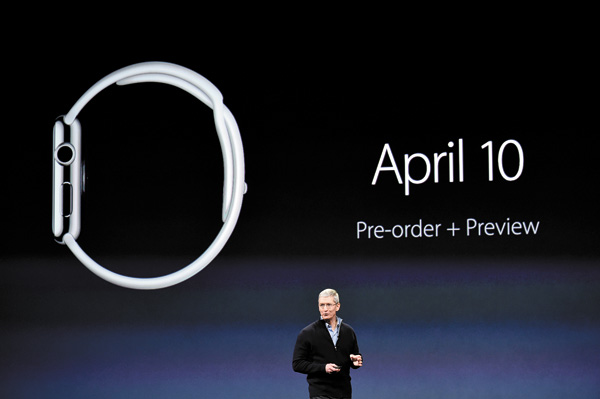 Apple’s first new gadget in five years, and the first since Steve Jobs died in 2011, enables you to send messages, read email, answer calls from your phone, track your fitness and pay for your coffee with Apple Pay - just about anything you do with your iPhone. It also lets you share heartbeats with a lover and instructs you to stand up when you have been sitting at your desk for too long.

But some analysts and Apple fans responded in disappointment with the smartwatch at the “Spring Forward” event in San Francisco, where the company also unveiled a new MacBook and other deals, saying it lacked “wow” factors.

Tim Cook began the Apple Watch presentation with its fashion aspects before taking on technological innovations. That choice indicates that Apple is mindful of the fact that the timepiece is not only a tech product but a fashion accessory, which could help Apple enter a whole new customer territory filled with fashion-conscious people.

“It’s not just with you. It’s on you,” Cook said. “Since what you wear is an expression of who you are, we designed Apple Watch to appeal to a whole variety of people with different tastes and different preferences.”

Apple Watch will come in two sizes - 1.33 and 1.53 inches diagonally - which is smaller than the 2-inch Galaxy Gear S. They will be available in three distinct collections in varying materials, colors and prices: Apple Watch Sport, Apple Watch and Apple Watch Edition. The starting price will be $349, but the most expensive one will carry a price tag over $10,000.

Apple has made various combinations of designs and materials possible for the new timepieces, which could provide an edge over Samsung’s competing product.

The cases come in aluminum, stainless steel and yellow or rose 18-karat gold alloys. A variety of straps is offered. For the Watch Sport, for instance, high-performance fluorocarbon-based synthetic rubber bands in five colors are offered.

Many kinds of watch faces are programmed in, including a traditional analog face and a face featuring Mickey Mouse.

American market researcher Strategy Analytics forecast on March 5 that Apple Watch will outpace Samsung Electronics’ Gear series to snatch a 54.8 percent of global market share this year. It also predicted smartwatch sales will grow six-fold this year over last to 28.1 million unit and 15.4 million units will be Apple’s.

Cho Sung-eun, analyst with Samsung Securities, came up with an even more upbeat prospect for the segment. He estimated that the new Apple gadget will post sales of 21 million units this year and the figure will ascend to 33 million units next year.

“The functionality and mobility of Apple Watch makes the reason to buy it more realistic than the reason to buy an iPad when it was released in 2010,” he said. The smartwatch’s real-life connectivity with iPhones will help secure more iPhone customers, he said, and prevent existing iPhone users from defecting to Android-based smartphones.

But he also mentioned its major downside: a battery life of only 18 hours, much shorter than Samsung Gear S, which lasts for two days.

Song Eun-jung, an analyst with Hi Investment & Securities, predicted limited influence from the new watch. “Apple Watch is similar in functions with the iPhone 6 and is not hugely differentiated from previously launched smartwatches,” she said.