Samsung Electronics retained the position as the country’s most valuable brand, followed by Hyundai Motor and Kia Motors. 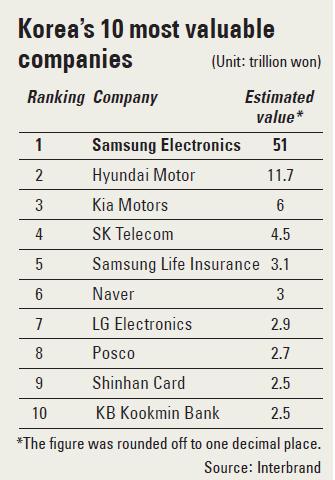 The aggregate value of the two most valuable brands accounted for 66 percent of the top 50 companies.

Interbrand Korea said it took into account companies’ financial performance, the general influence of brands and the distinctive strength the brand has to command a premium price.

The report also noted advances that Internet and communications companies made.

Naver, the top Internet portal, moved up two places to sixth place while Daum Kakao made its way to 37th for the first time.

The brand value of cosmetics brand Amore Pacific surged most - by 30 percent - due to its strong sales in China and Southeast Asia.

Thanks to the popularity of K-pop, with which it is associated, and its own brand recognition, the company has achieved double-digit sales growth in China over the last five years.

The total value of the top 50 brands is 125 trillion won.

“To be a truly global brand, the company should adopt a creative business strategy that can enhance the consumer experience.”

“In this digital era, Korean companies should focus on offering personalized consumer experience rather than selling products to the public.”

The report praised the nimble approach that retailers took to attract customers with digitalized services.

It said that Lotte Shopping, which ranked 18th on the list, CJ Cheiljedang (27th) and CJ O Shopping (33rd) successfully bridge the divide between brick-and-mortar stores and online and mobile shopping.

Amore Pacific and Shinsegae Department Store were also cited for using big data to personalize the shopping experience for consumers.

“Many industry sectors widely use big data,” said Moon Ji-hoon, president of Interbrand’s Seoul office. “Retail groups that should have direct contact with customers can explosively enhance their brand value.”