Soak up the spirit of spring in Korea’s southern regions

Soak up the spirit of spring in Korea’s southern regions 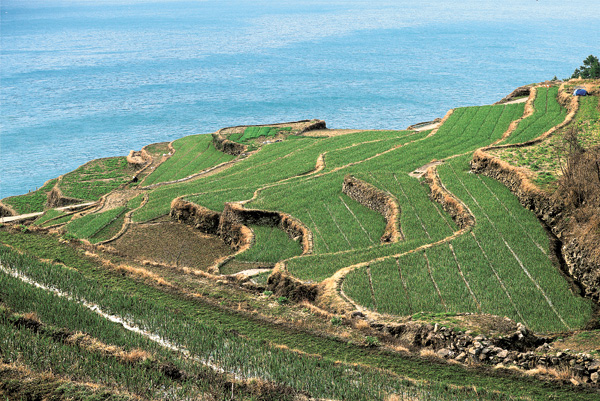 The hillsides of Daraengi Village in Namhae County, South Gyeongsang, are covered with new greens such as spinach, scallions and garlic. By Ahn Sung-sik

Although it is a little too cold to expect flowers to go into full bloom, going down to the south of Korea will fast-track you into spring before the rest of the country experiences the season.

Many paddies are covered in green as newly grown vegetables, including spinach, scallions and garlic, are almost ready to be harvested.

Willing to venture out in the still chilly weather to find traces of spring? Southern regions, including Namhae and Haenam counties, are the places to visit this weekend before the temperature goes up and colorful flowers overshadow the green.

Eating a bowl of fresh vegetables is always a good reason to push yourself out the door.

One of the tastiest in season is spring cabbage, known as bomdong. The place to find this crunchy vegetable in abundance is Jin Island, as 80 percent of the bomdong reaped in Korea is from the area. 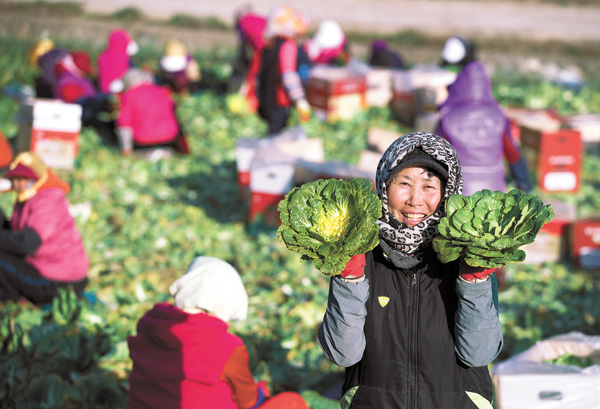 As soon as you cross Jindo Bridge into Gunnae, green paddies filled with cabbages will greet you.

The area is known for its big temperature difference between the morning and the evening, which helps bomdong grow better.

Locals usually scatter the seeds in late fall, which find their spots in the soil during winter when the earth is frozen and thawed several times.

The reaping comes in February to March when the cabbage grows to about the size of a grown man’s head.

“The ones that are about that size have enough water in them and are sweet,” said a local woman.

“With this, you make a soup or fresh kimchi.”

Locals say it is best to eat the cabbage with pickled hot-pepper sauce. The dish is normally named geotjeri, a kimchi that is freshly made, before it becomes fermented.

Moving to Namhae County will make you feel that spring has already arrived. Every hillside is covered with green as spinach, scallions and garlic is growing fast. Daeraengi Village, located in the southernmost part of Namhae, is especially known for its more than 600 paddies right below Mount Eungbong and Mount Seolheul.

Such paddies turned the village into a popular travel spot. Many guesthouses and cafes have opened, and many places are still under construction. The young focus on farming while the older people shifted to running lodging.

“To preserve [what we became known for], we don’t mess with the paddies,” said Son Myeong-ju, the head of the town. “Older people who can’t work on the paddies anymore renovate their old homes and start to house travelers.” 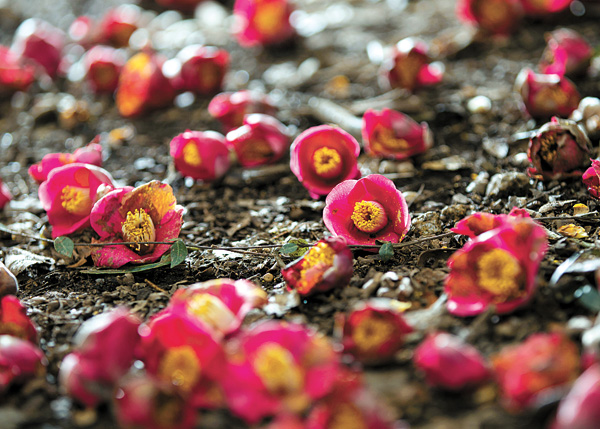 Camellia, known as Dongbaek in Korean, create a flower trail at Baekryeon Temple in South Jeolla. By Ahn Sung-sik

The harvest of new greens, including spinach and scallions, will continue until next week. Locals come out near the bus stops where tourists gather to sell the greens. They say they will soon plant beans and sesame seeds and reap the garlic in May.

It is not just the brown soil on the ground that nourishes the edible greens. The sea around Gogeum Island also provides a variety of products such as seaweed, which is easily collected in spring. The most abundant type is gamtae, which turns the mud light green when the tide goes out. 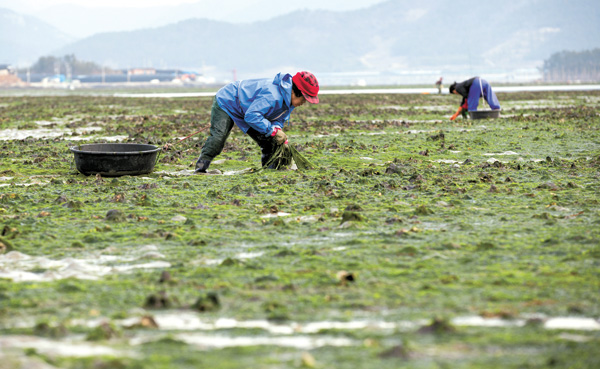 Locals from Gogeum Island in South Jeolla pluck gamtae, a type of seaweed, until mid-March. By Ahn Sung-sik

It is easy to pluck gamtae. You don’t need any fancy gear. Although the process is simple, you have to do it by hand since you should only pull out the top of the seaweed without the roots.

After spending a couple of hours in the mud paddies, your hands and feet will be frozen. While a novice may struggle, locals who have years of experience brag about baskets filled with almost 30 kilograms (66 pounds) of gamtae.

“It is not possible to spray any pesticides,” said 80-year-old Kim Byeong-ho, a native of the region. “That makes this salty thing something healthy.”

It is the best to eat the seaweed when it is fresh. You clean the greens once in seawater and again in fresh water, mixing them with salt and pickled hot peppers.

After March, as the plant gets drier in the paddy, it is better to pluck the seaweed and dry it under the sun at home before using it as an ingredient. As spring comes, more and more houses will have seaweed out in their garden, drying out.

Gamtae harvesting usually finishes in the middle of March. If you miss the season, run to a local restaurant where you can still taste some fresh seaweed. Gamtae kimchi, seaweed mixed with hot peppers, can also be delivered nationwide. A 9-kilogram box of the dish costs around 30,000 won.

If you can’t wait until the spring plants go into full bloom, look for Camellias, which are known as dongbaek flowers in Korea. They usually blossom in December and last until April. In the southern part of Korea, the flower tends to start to show its red petals in February, and most are in full bloom by the end of this month.

There is a large forest of dongbaek flowers near Baekryeon Temple in Gangjin, South Jeolla, with more than 1,500 trees.

Ume flowers are also a messenger that signals the arrival of spring. Geumdun Temple in Suncheon, South Jeolla, is known for having the first Ume flower of the season every year.

However, you can’t expect to see groups of flowers together as there are only six that bloom. Only a few survived after a monk at the temple took seeds from a more than 600-year-old tree in Nakan, South Jeolla, and planted them back in 1985.

“The flower is a lot like a hermit practicing asceticism, as it tries to bloom its flowers in those colder days,” said a monk at the temple. “The tougher and colder the winter gets, the brighter the red petals of the flowers become.”