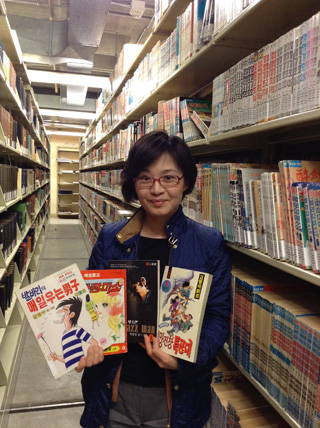 Yi Hyo-kyoung shows off some of the University of Washington’s Korean comic collection, the largest of any university in North America. Provided by Yi Hyo-kyoung

When the owners of an antiques shop in Washington purchased an abandoned storage locker full of Korean manhwa, or comics, they planned to throw them on eBay and make it rich.

But the would-be manhwa moguls quickly learned that selling 15,000 books in a language they couldn’t understand was all but impossible. After a few unsuccessful efforts, they gave up and emailed the University of Washington to ask if they could make a donation.

That gift alone gave it the most extensive manhwa collection of any university in North America.

“I had never seen that kind of scene before in my life,” says Yi Hyo-kyoung, the university’s Korean studies librarian, about examining the books for the first time in the summer of 2013. Thousands of manhwa, arranged into complete multi-volume series and in excellent condition, had simply been forgotten. “I was amazed.”

Yi and her team took the books back to the university and are in the process of making the entire collection available to students, faculty and library members in the community.

The acquisition of the works comes at an important point in the roughly 107-year history of Korean comics, which are distinctive in their emphasis on the everyday lives of normal people, rather than on superheroes or dystopian futures.

While comics remain popular on the peninsula, print manhwa itself is dying, increasingly replaced by digital comics, or webtoons. The university hopes that by preserving the genre in its original form, they will be able to provide an important resource to scholars of Korean culture for years to come.

For Yi, however, the preservation of the collection is also about preserving a part of her own history.

Growing up in Seoul in the late 1970s and ’80s, she remembers sneaking out of her house to visit the manhwabangs, or private comic rooms, that used to dot the city. Intimidated by the clientele of mostly unemployed men wasting the day reading books and eating ramen, Yi would rent manhwa - and then have to hide them from her mother at home, who considered them an unacceptable distraction from her studies.

Now at the head of one of the largest university manhwa collections on the continent, Yi is intent on celebrating the comics, whose legitimacy as a literary genre and art form is increasingly recognized.

Her latest effort is a four-day symposium, “K-Manhwa: Graphic Narratives from Paper to Screen,” to take place March 28 to April 1. At the center of the event is a series of talks by Yoon Tae-ho, the renowned author of the “Misaeng” series, which was adapted into one of last year’s most popular K-dramas.

Yi is also planning to create her own kind of informal manhwabang during the third day, setting out some of the collection for visitors to peruse as she did during her childhood in Seoul.

“I’ve thought of this four-day event for a long time,” says Yi. “That was my plan as soon as we received the manhwa collection .?.?. we need to celebrate in a big way.”

Despite all that the books have made possible for Yi and the university, their original owner remains a mystery. Yi suspects they once belonged to someone who ran a manhwabang in south Seattle, where there is a larger Korean population, but had to leave suddenly due to some misfortune.

“I tried to find the previous owner through the Korean community, but I wasn’t successful,” she explained.

When asked later what she would say to the original owners of the collection if she could find them, Yi expressed some hesitation - recognizing that the university’s gain was because of someone else’s loss.

“Perhaps our manhwa festival event will help in finding out the original owner,” she said.