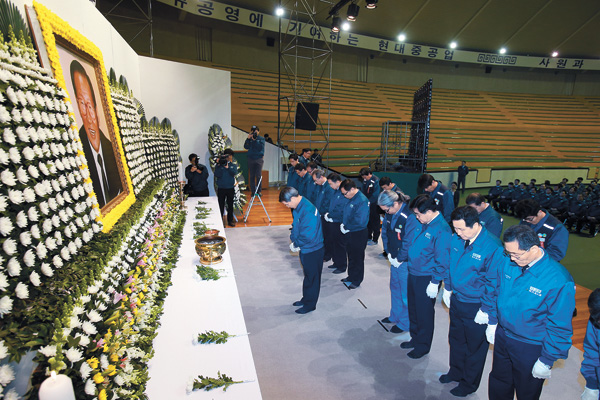 Descendants of Hyundai Group founder Chung Ju-yung gathered on Friday to hold a memorial to commemorate the 14th anniversary of his death.

The founder passed away on March 21, 2001, and his family has held an ancestral rite for Chung each year. People in the industry said the Chungs are also deciding how they will mark the founder’s 100th birthday, which falls on Nov. 25.

Separately, some affiliates of Hyundai Group held a ceremony to commemorate their former leader. Hyundai Heavy Industries Group held a memorial at its headquarters in Ulsan, which was attended by the group’s Chairman Choi Ki-sun and President Kwon Oh-gap. Executives of the shipbuilder will also visit the founder’s tomb in Hanam, Gyeonggi, on Saturday.

Born in November 1915, Chung established companies that became national leaders in many industries including Hyundai Motor and Hyundai Heavy Industries, and he is considered one of the most successful entrepreneurs in Korean history. He was also a lawmaker for about 10 months starting in May 1992 and ran for president in December that year.