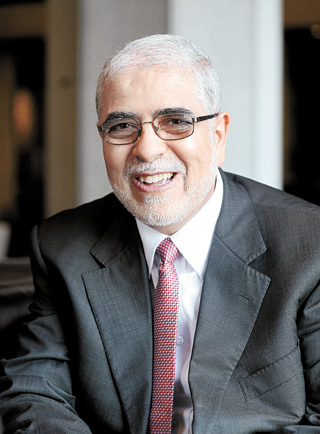 North Korean leader Kim Jong-un and the late Muammar el-Qaddafi have one outstanding quality in common, according to former Libyan Prime Minister Mustafa Abu Shagour: a life lived in fear.

The longtime Qaddafi critic described the former strongman, who ruled the country for 42 years before his death in 2011, as a man with “no values or reverence.”

“When you oppress people, when you do wrong to others, you cannot live happily,” Abu Shagour said in an interview on Friday in Seoul, where he was attending the first ROK-EU International Conference on Middle Eastern and North African Affairs (MENA). “You cannot trust even those around you.

“I don’t think [Qaddafi] enjoyed his life because he was a person who lived a life in fear. He was constantly in fear that somebody would wage a coup against him.”

He went on to refer to the disgraced Libyan dictator, a one-time foe who took over the country at age 27 in a 1969 revolt, as a ruler who “hated the Libyan people” and only “loved himself.”

The 64-year-old Abu Shagour was a well-known political opponent of Qaddafi while he lived in exile in the United States, where he taught electrical engineering before becoming an active voice in Libyan politics.

That responsibility only lasted four weeks, however, as he failed to win parliamentary approval for his new cabinet amid controversy over an attack by insurgents on the U.S. Embassy in Benghazi, an incident that left one American diplomat killed.

Still, four years after Qaddafi’s death, the former prime minister has not toned down his criticism.

“[Under Qaddafi’s rule, the] education system was run out. The health system was dysfunctional, and he used the money from oil revenues to support other crazy people like .?.?. the North Korean regime,” he said.

The Libyan people “never thought they would live in freedom,” Abu Shagour added, reflecting on the tremendous change brought about by the Arab Spring. “[They] never thought it would be possible ever. But they took to the streets [because] they decided it was for them [to demand change], not for [Qaddafi].”

The collapse of the Qaddafi regime led many North Korea experts to speculate whether Pyongyang would take a lesson from the turmoil, particularly regarding its nuclear program.

After years of negotiations, Qaddafi agreed to dismantle Libya’s nuclear arsenal in 2003 in return for sanctions to be lifted. Eight years later, he found himself on the run and was later executed by a local militia.

But Abu Shagour cautioned against believing the notion that the Qaddafi regime collapsed because of its decision to roll back its nuclear program. Rather, it was because people reached a point where they felt they could not put up with any more oppression, he said, noting that Qaddafi gave up on his nuclear program because he feared he may be the next U.S. target after Saddam Hussein of Iraq.

“What happened to Qaddafi is that oppression. He did come to a point at which people said this is it [and revolted],” the former Libyan prime minister said.

Such oppression triggers a people’s revolution in “almost every authoritarian nation,” as seen in “Tunisia, Egypt and now in Syria.”

Abu Shagour concluded that those who were formerly oppressed often end up with an insatiable desire to make their country better and put the past in its place.

“They don’t have control of dialogue because they have never made decisions on their own,” he said. “So we are now learning how to compromise and to settle differences and accept that we don’t always have the perfect solution to everything.”