Historical text may have been destroyed in fire

Historical text may have been destroyed in fire 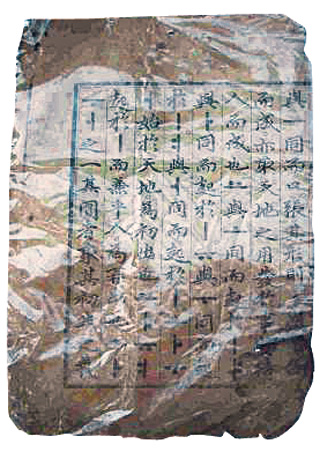 A blaze may have destroyed this copy of “Hunminjeongeum,” a 15th-century treasure.[JoongAng Ilbo]

A fire broke out at the house of the man who owns the historical text “Hunminjeongeum” on Thursday, fueling fears that the beloved Korean treasure has been destroyed.

The blaze at the property of Bae Ik-gi, a collector of ancient artifacts, in Sangju, North Gyeongsang, reportedly ruined the structure of the building, along with several items inside it.

“I was watching TV in the main room and the electricity went out,” Bae’s brother told police. “When I came out, there was a fire in the smaller room.”

It is currently unclear whether the 15th-century book was one of the damaged items as Bae, 52, who was embroiled in a scandal in 2008 over whether or not he is the rightful owner of the text, is refusing to divulge information about the whereabouts of the artifact or whether it is in a well-preserved state.

“Whatever I said, you wouldn’t believe me, would you?” Bae told reporters at the scene when asked if “Hunminjeongeum” had been rescued.

The name of the book translates into “The Proper Sounds for the Instruction of the People.” It has two parts: the Yeui section, which explains why Hangul was created, and the Haerye section, which details the principles, usage and gives examples of the writing system.

The Yeui is replicated in several other ancient documents, but the Haerye is extremely rare and, as a result, is valuable.

In 1940, it was discovered that respected art collector Jeon Hyeong-pil (1906-1962) had a copy of “Hunminjeongeum” featuring both the Yeui and Haerye segments. It is kept in the Kansong Art Museum in Seoul, which he founded, and has been designated National Treasure No. 70.

It is also registered on Unesco’s Memory of the World list.

But in 2008, Bae informed the state-run Cultural Heritage Administration (CHA) that he also had a copy of “Hunminjeongeum” with the Haerye section, claiming that he came across it when he was sifting through his collection of ancient documents.

As several copies of important Joseon documents were known to have been made, two curators from the CHA visited Bae’s home and concluded that the book was indeed authentic, in good shape and even has a footnote, which the Kansong version does not.

But a month later, an antique dealer Jo Yong-hun claimed that Bae had stolen the book from him. 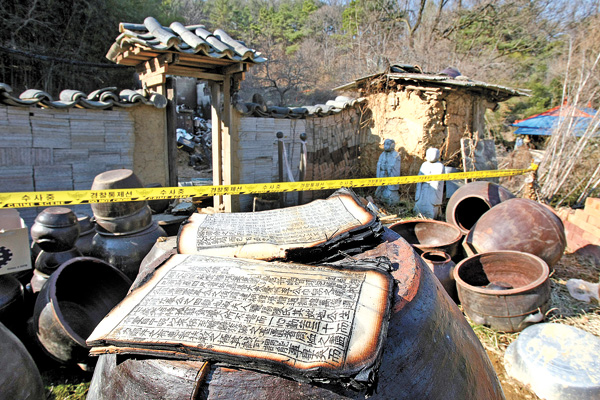 “Bae bought several ancient books from me at the price of 300,000 won [$272] and sneaked ‘Hunminjeongeum’ into the books,” Jo said while filing civil and criminal lawsuits against Bae.

Jo won the civil suit in 2012 and announced in May that year that he would donate the book to the state. The CHA even held a donation ceremony with Jo - ironically without the presence of the artifact, as only Bae knew where it was.

Jo passed away later that year.

Bae was then detained for investigation as part of the criminal lawsuit, held after the civil suit, but the Supreme Court cleared Bae of the charges last June. He refused to donate the book to the state and kept its location a secret.

“I was imprisoned for 367 days and my house has been searched,” he told KBS in a televised report on March 24, just two days before the fire. “And people testified against me, colluding to make me out as a thief.”

He said that he will not donate the text until his name is cleared.

“The world will never see the book,” he added.

But how did such a precious item end up out of the authority’s hands?

Experts in the cultural properties area say the book appears to have been lost after the Japanese invasion of Korea in 1592-98, known here as the Imjin War.

In fact, Gwangheung Temple in Andong, North Gyeongsang, has been arguing that one of Korea’s most notorious antique thieves, surnamed Seo, stole a group of artifacts kept inside a Buddhist statue in the temple in 1999 and that the book was one of the items.

Although critics question why a Buddhist temple would be in possession of a book published by a Joseon court, supporters note how Gwangheung Temple was historically one of the main venues for the instruction and promotion of Hangul. 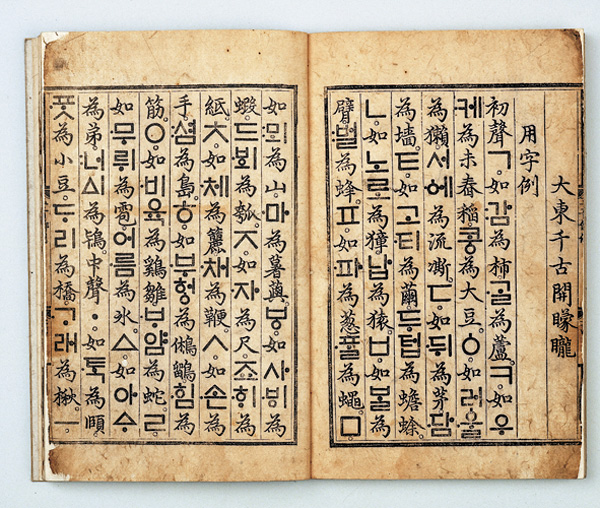 “Hunminjeongeum,” National Treasure No. 70 and a part of Unesco’s Memory of World. [JoongAng Ilbo]

Observers surmise Seo was not aware of the text’s value, which is how it ended up in an antique market.

Gwangheung Temple claiming ownership of the book is likely another reason Bae won’t come clean about where it is, observers say, if it was not destroyed in the fire.

Witnesses in Bae’s neighborhood testified to the police that they saw him repeatedly going into the house holding a small hammer, according to local media reports. They said it seemed like he was targeting a specific wall inside.

As some people are pointing to the possibility of arson, the National Forensic Service will start to investigate on Monday how the fire started given the interest in the book and its ownership.