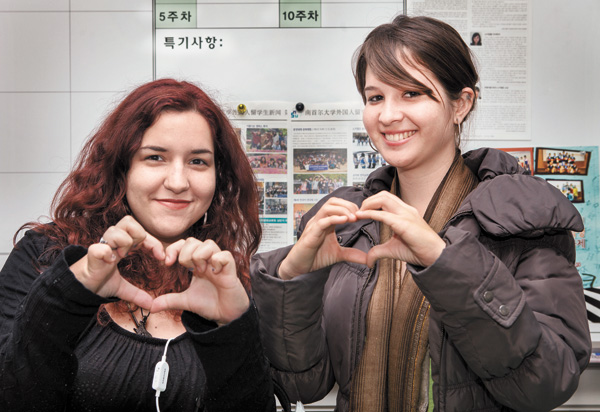 Growing up in one of the last Communist countries, Marisbelle Bermudez discovered the larger world through music. The 19-year-old from Havana, Cuba, recalls crooning with her father - a professional musician now working in Spain - and consoling herself with the soothing sounds of the guitar and piano, instruments she learned to play by herself.

Then one day, she came across the Korean drama “Boys Over Flowers” (2009), a Cinderella story in which a poor girl falls in love with a super-rich guy way out of her league.

Watching the 25 episodes of a TV show from a country 8,013 miles away with its glamorous stars - actress Ku Hye-sun and actor Lee Min-ho - the private jets, designer clothes and glittering jewels, Bermudez felt she was in a dream she didn’t want to wake up from.

“I fell in love with Korean culture and language after watching that show,” Bermudez said in broken Korean, tentatively pausing after each word to avoid making a mistake.

“Before I got interested in Korea, everyone [from Northeast Asia] was Chinese to me,” she laughs. “Everyone looked the same and spoke the same language. But now I can tell the difference.”

Bermudez is one of the two Cubans recently chosen by the National Institute for International Education (NIIE) for a six-month scholarship at Namseoul University. Along with Lorena Care Lim, who’s also from the capital of Havana, Bermudez is enrolled in a Korean language program for international students at the school in Cheonan, South Chungcheong.

The scholarships are part of NIIE’s effort to promote the Korean language and invite foreign students willing to develop a deeper understanding of it to come to Korea.

Bermudez and Lim took their first Topik, or Test of Proficiency in Korean, in April 2014, the first ever to be held in Cuba. Their grades - a level 1, the lowest of nine levels - were far better than the other Cuban test-takers.

The fact that they came from a Communist island nation that Seoul doesn’t have diplomatic ties with was significant on its own. It is part of the Park Geun-hye administration’s gradual move to end a half-century of isolation from a country North Korea likens to a “brother.”

Following U.S. President Barack Obama’s surprise announcement last December that he wishes to normalize relations with Havana, Foreign Affairs Minister Yun Byung-se said in February that Seoul will do the same, declaring it one of the ministry’s priorities for this year.

That was the first time a Seoul official has publicly mentioned restoring ties with Cuba since they were cut in 1959 following the 1953-59 Cuban Revolution.

All major countries but three - Korea, the United States and Israel - have diplomatic relations with Cuba.

The only other countries that Seoul has not yet normalized ties with are Syria, Kosovo and Macedonia.

A day after Yun made his proclamation, the Foreign Ministry described plans for a food assistance project for Cuba with the help of the United Nations. It vowed to spend $3 million by 2017 to raise food productivity and alleviate poverty on the Caribbean island.

That donation was on top of a previous $1 million worth of aid to a Cuban medical team fighting Ebola in Sierra Leone.

“The two scholarship holders will most likely affect educational exchanges between Korea and Cuba,” said Kim Dong-hee, the Topik director for the NIIE. “Through them, Korea’s culture, school system and educational programs will be introduced to Cuba, and we expect to see a large influx of Cuban students to this country, who were initially inspired by Hallyu [the Korean Wave of pop culture].”

In regards to how the state-backed institution is further planning to promote Korean in Cuba, Kim says the NIIE will disseminate online learning materials produced in Spanish.

That move, she said, is backed by reports from the Korean embassy in Mexico City that learning Korean has become a kind of fad among the young generation in the island nation.

With no Korean embassy in Havana, consular issues between the two countries are covered by diplomats in Mexico.

In a recent email interview with the Korea JoongAng Daily, the second secretary of the Korean embassy in Mexico, Jo Choong-kyoung, said the fad peaked in 2013 with the playing of several popular Korean dramas on Cuban national television, including “Queen of Housewives” (2009) and “My Fair Lady” (2009).

“The popularity of Lee Min-ho in Cuba is really beyond your imagination,” says Jo. Eager fans frequently ask him to organize a visit by the actor.

Seoul also funds Korean classes in Havana, which teach around 100 students each semester on three different levels. Jo said he’s flooded with requests by students wanting to be enrolled.

“People in Cuba are normally happy, open and very strong, which is why in contrast Koreans look more reserved and mysterious.”

As a way of removing post-Cold War tensions between the two countries, cultural exchanges are a tried and true method, analysts say.

That is especially true considering that Pyongyang, which maintains close relations with Cuba, doesn’t have much to offer in terms of cultural content to win over Cuban youth.

“At a time when Korean culture has already spread across Cuba, North Korea is struggling to find something just as appealing,” said Kwon Byeong-an, director of the Korea Cuba Exchange Association.

“No matter how much Pyongyang whines about a political alliance and military partnership, or sharing blood with Cuba, what really ends up enriching people’s lives are economics and culture.”

But even with demand for Korean culture at its peak, some scholars wonder whether Seoul and Havana will ever restore diplomatic ties. Cuba would risk its alliance with the Kim Jong-un regime of North Korea.

“Nothing is more unpredictable than a socialist country,” said Chung Kyung-won, director of the Center for International Area Studies at Hankuk University of Foreign Studies. It’s “impossible” to pin down a time frame, he says, of when normalization between Seoul and Havana will take place.

“It really all comes down to what Fidel Castro decides. Even if he transferred his responsibilities of presidency to his younger brother, Raul, he still remains the top decision maker of Cuba.”

Chung says that Castro has told his cronies not to rush to stabilize relations with Seoul, based on government sources who are involved in closed-door negotiations with Havana.

Castro’s solid friendship with the North dates to the 1980s when Pyongyang supplied Cuba with 100,000 AK-47 rifles after the Soviet Union declared it could no longer provide military aid against a feared U.S. invasion.

Interactions between Cuba and North Korea heavily rely on weapons trading, in most cases through illegal travel routes that violate a UN weapons embargo.

South Korea is Cuba’s third largest trading partner in Asia, following China and Vietnam, but they’re a drop in the bucket. Exports to Cuba reached approximately $56 million last year, up from $48 million in 2009, according to data from the Korea Trade International Association.

The state-backed Korea Trade-Investment Promotion Agency (Kotra) opened an office in Havana in 2005 to help Korean companies penetrate the Caribbean market. Conglomerates including LG and Hyundai have shipped exports there.

Imports from Cuba last year were $12 million, up from $8.5 million in 2009. Products shipped to Cuba are mostly automobiles, home appliances and heavy industrial machinery, while imports are mainly tobacco and scrap metal.

“Cuba isn’t asking for diplomacy,” said Chung, “but rather financial help and economic partnerships. They already have that from us right now, so for them, it’s like, ‘Why risk our friendship with Pyongyang for something we don’t necessarily need right now?’?”

As for the Cuban students on the six-month Korean language course at Namseoul University, Lim says she looks forward to her native country’s pivot to economic development, and that she admires the leaps Korea has achieved over the past decades.

“We [her and Bermudez] both are happy that Cuba is opening not only economically but politically and socially with other countries,” says Lim. “Establishing diplomatic ties with Korea will lead to improvements in the economic system, so I think it’s good.”