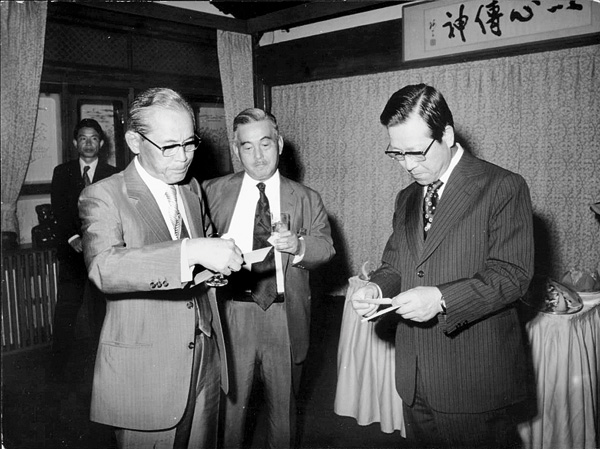 Kim Jong-pil, far right, looks at a note during a banquet welcoming Japanese entrepreneurs on June 13, 1974 in Seoul. Third from right is Lee Byung-chul, the late founder of Samsung Group. Provided by Kim Jong-pil

With the success of the May 16 revolution, a military government led by Park Chung Hee took the helm of the country. But that was only the beginning of our journey toward modernization. At the time, the public had little idea of what modernizing a poverty-stricken Korea really meant. Hoping that the people would agree with me on the ever-growing importance of raising living standards through modernization, I tried to use that word as often as possible in public.

As a young man in his 30s who designed the revolution, I was filled with ideas of how I could help pull this country toward the conditions of a modern state. By definition, a modern state runs on the principles of freedom and democracy through which people can live their lives in whatever ways they desire. But before guaranteeing democratic values, a country must feed its own people. I was firm in my belief there would be no democracy if there was hunger. To enjoy democracy, a country must have enough economic prosperity to provide people the food they need to eat. After achieving economic growth, we could move on to introduce democratic principles and then progress to a welfare society built on economic prosperity afterwards.

Rushing to achieve all these things at once would lead to failure across the board as seen by many countries following their liberation from the end of World War II.

Mencius, an ancient Chinese philosopher, famously said, “Without a consistent source of wealth, one will not be able to have peace of mind.” I couldn’t agree more with that thought from 2,300 years ago. 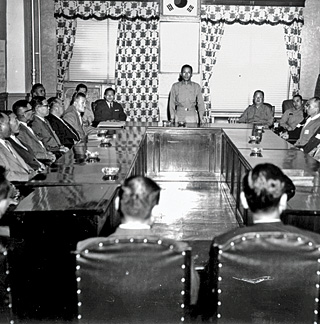 Park Chung Hee, Chairman of the National Reconstruction Supreme Council, asks for cooperation with the country’s five-year economic development blueprint during a meeting with members of the Korean Entrepreneurs Association, which is now called the Federation of Korean Industries.

Without being assured that he will have the means to feed his family, man will always live in shame. But with wealth of his own, he will be kind to others. I had it in my political philosophy that democracy can only run when it’s built on a sound economic foundation.

I was the founder and first president of the Korean Central Intelligence Agency (KCIA), the country’s first spy agency, which is now called the National Intelligence Service. It served as a policy think tank through which I could put my political philosophy into action.

I always defined myself as more of a pragmatist than an idealist in that regard.

During its first month in control of the country, the Supreme Council for National Reconstruction launched a strong drive to purge rampant corruption from business and political circles. On May 28, 1961, less than two weeks after the revolution, the council announced a long list of corrupt businessmen. Big names in the business community were detained in a sweeping move. I had to watch the supreme council arrest influential businessmen because I was not a member of the council.

I didn’t like the idea of blaming these businessmen for corruption because we needed to mobilize them to launch a strong economic drive for growth. We needed their cooperation.

On June 8, Chang Ki-young, founder of the daily Hankook Ilbo, came to visit me. He agreed with me on the importance of working with the business circles.

Chang recommended that I meet Namgung Yeon, head of the Far Eastern Shipping Company, for his insight into reviving the national economy.

I did as I was told. A few days later at Chang’s home, I sat next to Namgung, who was nervous facing the head of the spy agency. I asked him for his advice on economic affairs. He first asked me if the KCIA took the lead in arresting businessmen accused of corruption. I told him it was done by the supreme council.

His criticism of the unforgiving move against businessmen was blunt.

“As an old saying goes, a thief who has stolen before does better at robbing the next time. It looks like the military government prioritizes the economy as it launched a committee committed to an economic plan. But with everyone who would lead those efforts locked up behind the bars, who will put that plan into action? Isn’t it more prudent to release them and ask them for cooperation?

I agreed and told him the government would give them some space so that they could extend their economic activities. Impressed with what I said, Namgung held my hands and said, “I thought the men behind the revolution were all macho men with little knowledge of economic affairs. I am pleasantly surprised.”

The next day, I went to see Park Chung Hee and asked him to release all the jailed business owners. “Who will work with us to jumpstart the economy? We have some experts in economic planning but they are all scholars who have no field experience. Let the businessmen out and have them clinch overseas projects to earn foreign capital for the country.”

Park concurred with me, saying he wasn’t comfortable with detaining them in the first place. He assured me that he would take care of it.

On the top of the list of corrupt businessmen was Lee Byung-Chul, founder of Samsung Group. Lee was in Japan. He was worried that he would be put behind the bars if he set his foot in the country. I relayed a message through a middle man that he would not be arrested. On June 26, Lee returned to Korea.

I ordered my subordinate to escort Lee to a hotel in Seoul with utmost respect. That night, I met Lee for the first time in a hotel room. I asked him to lead the association of businessmen as chairman and take the lead for national economic development. Lee promised me he would.

The next day, Lee met Park also for the first time. Park asked Lee to unite entrepreneurs to help the country’s drive for economic growth. On June 29, all businessmen who had been locked up were released. Lee became the first president of the Korean Entrepreneurs Association, which is now called the Federation of Korean Industries.

Every time I met businessmen back then, I urged them to clinch business deals overseas, promising them the government would always back them financially. Soon, they began bringing business projects from overseas as we had expected and Lee Byung-chul was always in the lead. Lee’s efforts greatly helped the government design its first five-year economic blueprint (1962-1966).