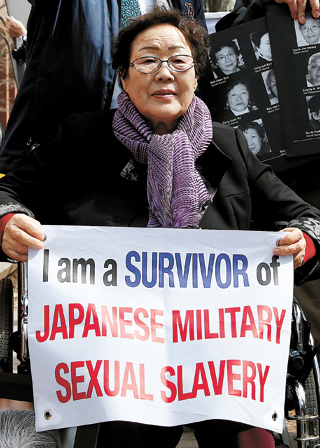 Lee Yong-soo, a Korean women who was forced to serve as a sex slave for the Japanese imperial army during World War II, participates in a protest outside the John F. Kennedy School of Government at Harvard University in Cambridge, Mass., where Japanese Prime Minister Shinzo Abe spoke on Monday. Protests forced Abe to use a back entrance. [AP/NEWSIS]

Japanese Prime Minister Shinzo Abe evaded an apology for coercion of women into sexual slavery during World War II in a speech at Harvard University, despite protesters including an elderly former victim calling for contrition and justice.

“When it comes to the comfort women issue, my heart aches when I think about those people who were victimized by human trafficking and who were subject to immeasurable pain and suffering beyond description,” Abe said in a speech at Harvard’s Kennedy School of Government in Cambridge on Monday.

His language echoed remarks from an earlier Washington Post interview. He used the term “human trafficking” to describe the forced conscription of women into brothels without specifying the perpetrator, and avoided the term “sexual slavery.”

Abe did not deliver anything like an apology to the “comfort women,” euphemistically referring to some 200,000 women who were forced to serve as sex slaves to the Japanese military before and during World War II. Nor did he repeat previous apologies by Japanese prime ministers, including Tomiichi Murayama. In 1995, he made the landmark Murayama Statement, in which he expressed “deep remorse and state my heartfelt apology” for Japan’s “colonial rule and aggression.”

In Boston, Abe said, “My feeling is no different from my predecessor prime ministers.”

Abe reminded the audience that he claims to “uphold” the Kono Statement even as he refuses to repeat it, and added, “From such a standpoint, Japan has made various efforts from the perspective of offering realistic relief for the comfort women.”

A 1993 statement by Chief Cabinet Secretary Yohei Kono apologized to the women and acknowledged that the Japanese government recruited them “against their own will” into so-called comfort stations.

Over 100 protesters including Harvard students and a surviving sex slave victim, 87-year-old Lee Yong-soo, participated in a rally outside the auditorium where Abe spoke.

Protesters at Harvard lined a pathway to the venue holding signs that read, “Heartache is not an apology,” “Justice for survivors,” and “You can rewrite history, but you cannot rewrite the truth.”

Lee participated in a wheelchair with a sign, “I am a survivor of Japanese military sexual slavery.”

Last week, Lee was a guest in the U.S. House of Representatives in Washington as a group of U.S. lawmakers including Rep. Mike Honda of California delivered a special order urging Prime Minister Abe to apologize for Japan’s aggressions during World War II.

Lee testified at a congressional hearing in 2007, leading up to the landmark U.S. House of Representatives Resolution 121, adopted that year, urging Japan to acknowledge and officially apologize for forcing women into sexual slavery.

The prime minister had to use a back courtyard entrance connected to the parking lot to avoid the protesters. When he exited the building, he again used a corner entrance, avoiding the front entrance.

Abe’s remarks indicate it is unlikely that a proper apology will come in his speech before Congress Wednesday. He also visited the Massachusetts Institute of Technology (MIT) before departing for Washington.

He is slated to hold a summit with President Barack Obama at the White House Tuesday.

Abe arrived in Boston on Sunday to kick off a weeklong official visit to the United States.

Alexis Dudden, professor of Asian History at the University of Connecticut, said to reporters on the sidelines of the Asan Plenum forum in central Seoul, “We all want what we have already have heard from the Japanese government, which is not simply an inheritance of the Kono Statement.”

She said the “most important component is not simply that we all feel the pain of the victims of human trafficking but rather that we acknowledge responsibility for this system and that we learn from it.”

This year Dudden led a group of 20 U.S. academics in publishing a letter condemning the Abe government’s tendency toward historical revisionism especially by suppressing information in Japanese history textbooks.

In regards to Abe’s use of the term human trafficking, she said it was a legal term used in the United Nations. “The problem is that nobody is held responsible for the human trafficking,” specifically the Japanese state or military.

Dudden, who has received hate mail and death threats since the letter was published, added, “What we also need to recognize is this is not history we are talking about… We have a memory war. A memory war has the potential to actually become a real war. A history war doesn’t: it’s fought with evidence and debate and you change an analytical position. A memory war is about shoring up national pride.”