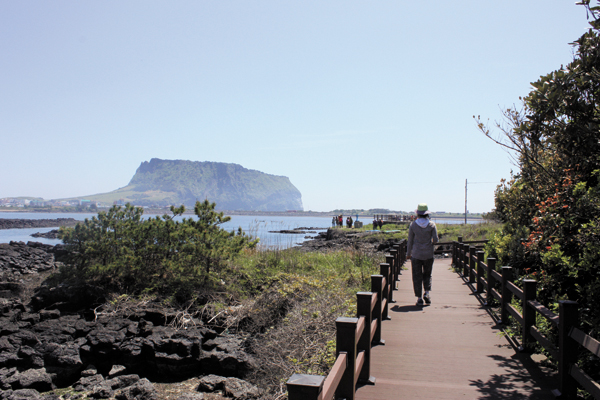 Trekkers walk the Seongsan Ojo Geo Trail, which opened on Sunday. The trail was established so that tourists could get a better view of Seongsan Sunrise Peak, different from the experience of actually climbing it. By Lee Sun-min

Perhaps one of the downsides about climbing up Seongsan Sunrise Peak, whose unique volcanic formation was recognized by Unesco, is that hikers don’t have the opportunity see the big picture - how this intricate peak is shaped and formed.

So for those travelers more interested in seeing it a few steps away, the Jeju Tourism Organization has added an alternative that allows visitors to see how the structure harmonizes with the rest of the landscape.

The agency on Sunday unveiled its new Seongsan Ojo Geo Trail, which spans a little more than 8 kilometers (5 miles) and includes a hike up to the peak as well as jaunt around nearby villages.

The pathway is just one of the types of trails Jeju Tourism Organization has been working on developing since 2011 that center on the areas known for their unique geological landmarks. The initiative started one year after the entire Jeju Island was designated in 2010 as a World Geological Park.

The Seongsan Ojo trail is the fourth geo-trail the tourism organization has opened, followed by pathways around Mount Sanbang, Gimnyeong and Woljeongli villages, and Suwolbong Peak. While the organization there has continued to provide more trekking options since Jeju debuted its popular Olle trails, it has also attempted to make its treks educational.

The development of these trails does a little more than merely providing a better tourism environment. It also boosts the livelihoods of local townspeople, allowing them to open cafes or restaurants where tired trekkers can take a break. Most Seongsan and Ojo villagers were eager to be part of the development of the Seongsan Trail from the start.

“Villagers have recognized the importance of the geological asset they have in town and have been very active in establishing the trail,” Choi Kab-yeol, the president of the Jeju Tourism Organization, said during the trail’s opening ceremony. 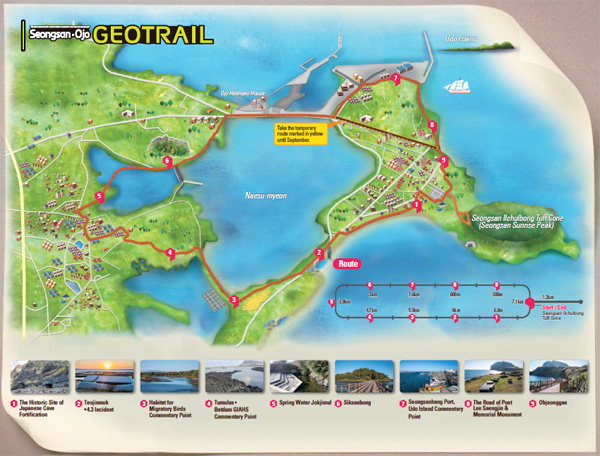 “We focused on reflecting the life and culture the villagers have built over time so that residents near the trail can have some economic benefits, too.”

Of the nine points on the trail aside from the peak, two show conspicuous evidence of volcanic activities and how that came to make Jeju a unique geological park. Tumulus-Batdam Giahs Commentary Point, a hill with very gentle slope, was formed from lava whose surface cooled down as the flow underneath stayed active. Due to the pressure involved, the land gradually moved upward into its current shape.

Ohjeonggae, a small harbor, is also the only place where animal fossils can be found.

“Although many great geological features are not obviously present along the trails - though all travelers can see it is a scenic view - it is important for Korea to designate these areas as geo-parks and promote them. That will actually encourage people to be more aware of what the area has underground so that they can sympathize with the need to protect these assets, even when they are not so obvious,” said Prof. Kang Soon-seok of the Jeju Geological Institute.

“There is some speculation that people lived here 5,000 years ago when the volcanoes were active on the island, based on the archeological relics currently buried underground, and saw what was happening,” Kang continued. “Then you might be able to feel the greater geological dynamic to appreciate the trail better, and that’s one way to infuse a story to this trail in an attempt to increase interest.” 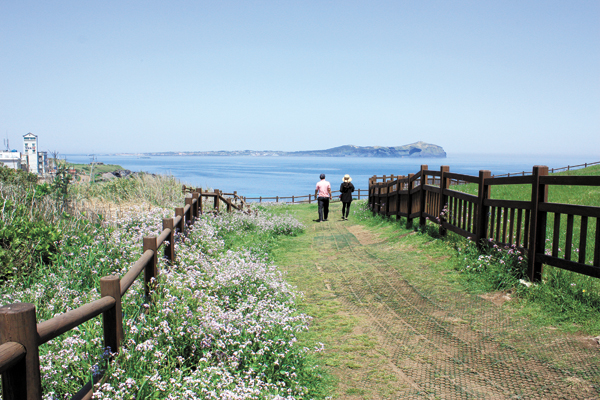 While walking the trail, trekkers get a full view of Udo Island, another site recognized by Unesco as an important geological park.

It doesn’t matter where trekkers begin, as the trail is circular, but walking in a northeastern direction from Seongsan Sunrise Peak is recommended. This reporter started from Ojo Haenyeo House, where travelers can eat fresh seafood gathered by local divers. It’s a good choice, especially for those wanting a hot meal before their big workout.

There are also a number of activities to choose from along the peak’s southwestern end, which might be better to hold to the end.

The trek takes about four hours including the walk up the peak. The trail itself, sans any supplementary activities, takes about two hours to complete.

Visitors to the trails can also request a tour guide, who can provide more detailed information on how the villages around the area were formed or the geological characteristics of the region.

Call the Jeju Tourism Organization for groups with fewer than 20 people. It costs 50,000 won ($46.58) for two hours with a guide. Near the Habitat for Migratory Birds Commentary Point, tourists will pass a small barn, where horseback-riding lessons are available.

Along the walk from Teojinmok to the Historic Site of the Japanese Cave Fortification next to the peak, trekkers can also find stores that offer underwater diving opportunities.

The tourism organization is currently working with a local dive shop to give visitors a chance to look at the area’s unique stratum, which can only be accessed through diving.

The program, which will be ready sometime next month, will include a quick overview of the underwater scene, about an hour-long dive, and an explanation afterward of what was seen.

Those more interested in underwater creatures than geological formations also have the option of diving without gear, just like Korea’s haenyeos, (female divers). Tourists can check out the different types of sea life as well as the creatures caught for consumption.

The launch of the trail has also given local residents a chance to show off the area’s unique cuisine.

Baked goods inspired by all things Jeju can be found here, including Madeleines shaped like the shells long buried underground. Lava cake filled with molten chocolate is also available - a delicious and educational experience for youngsters. Chocolate lava flows ooze out of the cake when it’s microwaved.

The pathway that loops around to Udo Island will be included as part of the official route in September. Currently, trekkers can walk along Hando-ro in Seongsan village.