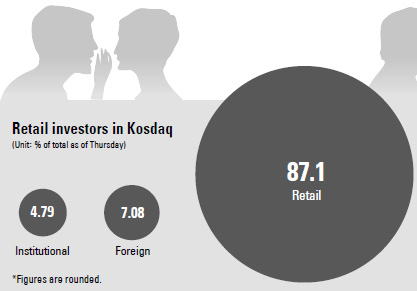 The bullish rally on Seoul’s tech-heavy junior market that started in mid-March when the Korean central bank lowered the policy rate seemed like it was just the beginning and could continue throughout the rest of the year.

Today, the upswing seems like a distant mirage as the Kosdaq has been on a downward spiral that started last week.

The Kosdaq has been on a slippery slope since Wednesday. Only once - on Monday - did it recover in the six trading days leading up to Thursday. The market was closed Friday for Labor Day. The last trading day of this week on Thursday saw the index stumble 0.96 percent, or 6.68 points, to close at 689.01.

It took only one controversy surrounding a biotech company to pull the Kosdaq down.

It has long been one of the biggest concerns that the secondary market is vulnerable and easily manipulated as the recent situation has once again demonstrated.

The Kosdaq had enjoyed a bullish rally since the Bank of Korea on March 12 shaved 0.25 percentage point off the policy rate from its already all-time low of 2 percent to a another new low of 1.75 percent.

Since then, the Kosdaq had been advancing. In just a month it exceeded the 700 mark for the first time in seven years. On April 17, the market gained 1.23 percent to close at 706.9. It was a significant recovery for the junior market, which had struggled since 2008. In fact, the Kosdaq saw a steeper rise than the Seoul benchmark Kospi. Compared to the beginning of the year, the Kosdaq marked 29 percent growth when it reached the year’s high at the time on April 21. The Kospi grew 12.8 percent compared to the beginning of this year to its highest point on April 23, when the market closed at 2,173.41. The Kospi also responded slower than the Kosdaq to the policy rate cut. While Kosdaq stocks advanced the same day, the Kospi retreated. It was half a percent down to close at 1,970.59, although the following day it quickly rose 0.77 percent to close at 1,985.70.

Yet it was not until the beginning of April that the primary market started to gain momentum.

The growth in both the Kosdaq and Kospi is welcome, especially since it exceeds that of the MISCI AC World Index that has advanced 6.1 percent this year.

But the party didn’t last long. When the Korean consumer protection agency announced that biotech company Natural Endotech had used an unauthorized herbal ingredient that looked very similar to the one it promotes, the company’s stock price plunged to the daily limit and dragged the Kosdaq down with it.

Starting April 22, Natural Endotech’s stock - except for Tuesday - sank to the daily limit for six trading days. As of Thursday, the company’s value had plummeted 60 percent compared to April 21.

The Kosdaq during the same period also retreated. In the past seven trading days, the market closed higher only once, on Monday. Compared to April 21, the day before the controversy started, the Kosdaq index was down 3.57 percent.

Interestingly, based on capitalization, Natural Endotech isn’t a stock that should be expected to have a heavy influence on the Kosdaq.

Despite what many considered to be Natural Endotech’s potential for no more than a negligible influence on the secondary market, it turned out to be a case of the tail wagging the dog.

How could this happen? Experts say the biggest vulnerability of the Kosdaq is largely caused by its heavy concentration of retail investors.

The problem with retail investors is many of them choose to buy stock using borrowed money. In hopes of riding the wave of optimism, many resort to taking out unsecured loans from financial institutions, including brokerage firms, to finance their stock purchases.

Experts say the biggest problem is that many of the Korean retail investors purchase stocks with borrowed money without having substantial information on a company. They tend to invest largely on rumors and speculation. As a result, those same reasons can quickly become their undoing. The recent controversy has exposed such problems within the secondary market, as retail investors have been offloading shares largely influenced by the emotions of the moment.

So why the difference? Unlike the Kosdaq, the reason such heavy investors actively participate in the Nasdaq is because many of the world’s leading companies, including Apple, Google, Amazon and Facebook, are listed. The situation is different from the Korean market.

Meanwhile, retail investors who buy stocks on unsecured credit have been growing rapidly, even larger than the Kospi.

As of Thursday, the stocks purchased using unsecured loans on the Kosdaq amounted to 3.95 trillion won, compared to 3.53 trillion won in the Kospi.

Considering that the Kosdaq market is crowded with retail investors, a bearish situation is likely to lead to a crisis.

“The stock market has been on a steep rise thanks to a rapid increase of participation by retail investors, who were relatively absent in the past couple of years,” said technical analyst Kim Young-il of Daishin Securities. “The return of retail investors is good news for the local market’s liquidity and it will act as a positive variable for the market.

“However, there needs to be an awareness of the potential problems that come with such excessive growth of retail investors in such a short time. There have been several cases in the past where liquidity problems surfaced later when loans related to the stock market, including purchasing stocks on unsecured loans, have grown significantly.”