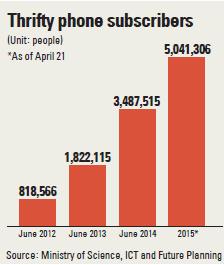 More users are flocking to thrifty phone providers that rent network space from Korea’s largest mobile carriers as the government regulation on subsidies for smartphones has caused phone bills to surge amid a tough economy.

According to the Ministry of Science, ICT and Future Planning, the number of thrifty phone subscribers surpassed the 5 million mark, with its market share hitting a new high of 8.8 percent. The latest findings are based on records as of April 21.

Two years ago, the number of people taking advantage of the cheaper telecom service only accounted for 2.9 percent of all subscribers.

Once considered only a minor force, the share of thrifty phone users is on the brink of hitting the double digits, a trend that has put bigger telecommunication companies on edge.

That translates into savings of more than 240,000 won per year, 57 percent cheaper than the service offered by Korea’s largest mobile carriers - SK Telecom, KT and LG U+.

Although the monthly fees charged by the operators are much cheaper, the quality of mobile services is comparable to that of the big three, according to the KCC.

Before, thrifty phones were often disregarded as a service used by older people.

But as the prices of data plans surged following the implementation last year of the Mobile Device Distribution Improvement Act, many in the younger demographics have turned toward the alternative service.

The Science Ministry cited subscribers to the cheaper service offered by Korea Post to highlight the trend.

“Those in their 30s and 40s form 32.2 percent as of April 21,” the ministry said in a statement. “And the number has consistently increased.”

Smaller vendors have expanded their business by cooperating with diverse retailers and targeting a specific clientele base, such as Chinese residents.

Currently, a user can register for the cheaper telecom service at major convenience stores 7-Eleven, CU and GS 25 as well as discount chains including E-Mart.

The retailers seek to attract customers by offering promotions. For example, E-Mart provides discounts for those purchasing thrifty phones while most convenience stores do not require initial subscription fees.

Still, there is a lingering issue: The operators suffer losses. Twenty-seven MVNOs generated combined sales of 875.5 billion won in 2014, an increase of more than fivefold compared to four years ago.

In the meantime, the operating loss generated by the 27 vendors surged 20 times in four years, from 4.6 billion won to 96.5 billion won last year.

This is precisely why the Science Ministry is considering extending the period of subsidizing smaller vendors, which is set to end in September.

“We will do our best to achieve a double-digit share this year,” said Cho Kyu-jo, the director of the ministry’s telecommunications policy division. “We will focus on providing any necessary support to make MVNOs a major player in the telecom industry.”

The government promotes and sells thrifty phones through public agencies like the Korea Post. The agency said the centers offering the service are concentrated in rural areas so residents can access affordable smartphones.