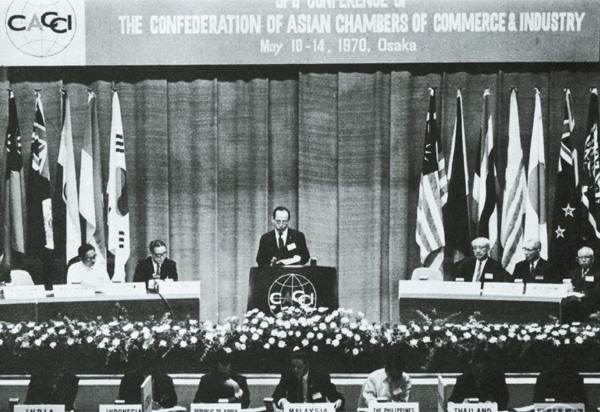 Chairman Park Too-pyung delivers his inauguration speech at the third conference of the Confederation of Asian Chambers of Commerce and Industry in Osaka in 1970. Photos provided by Doosan

Park Seung-jik, nicknamed Maeheon, is the founder of Doosan Group, the oldest Korean conglomerate with the longest history. Park, who started his career as a packman, peddling household items on the street, and ran an inn for merchants during the Korean Empire, is one of the country’s best-known success stories.

Park’s eldest son, Park Too-pyung, whose nickname is Yeongang, inherited his father’s company and business philosophy and developed it into Doosan Group.

Maeheon was born June 22, 1864, in Tanbeol-ri, Gwangju County, Gyeonggi. He studied Chinese literature for about 10 years. Realizing that he had no future as a tenant farmer, Maeheon started selling lamp oil and leather products at Songpa Market about 8 kilometers (5 miles) from his house in the early 1880s. At the age of 17, he moved to Haenam, South Jeolla, to follow Min Yeong-wan and sell textiles such as cotton and calico, taking with him all the money he had earned for the previous three years. The two bought cotton in Jemulpo (now Incheon) and sold it in Gyeonggi and Gangwon. For two months, Maeheon acquired the spirit of thrift, as he survived on potatoes.

The packman spirit became the foundation of Doosan Group. During the Joseon Dynasty, many packmen traveled across the nation, playing a key role in the economy of the era. They had business ethics that emphasized credit and mutual cooperation. When national disasters occurred, they used their distribution networks to help people, serving as social welfare providers.

The thriftiness Maeheon learned from peddling was passed on to future generations through home education. Yeongang remembered his father as always thoughtful of people. “He ate mixed food his whole life,” he said. “He always wore frugal clothes. Family members were always in cotton pants and jackets. At his shop, there was silk, but my father never touched that to make his own clothes. Even in winter, he relied only on cotton-stuffed jackets.” 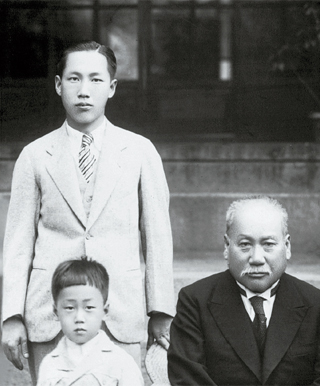 As merchants’ activities became liberalized in 1894, Maeheon moved to compete with city merchants in Seoul’s Jongno 4-ga, known as Baeogae, a commercial hub since the 18th century. On Aug. 1, 1896, Maeheon opened his own business called the Park Seung-jik Shop. Maeheon gained a reputation as “Baeogae’s business magnate” in the early 1900s.

In 1907, he was nominated as a deputy minister-level official at the Central Advisory Council and actively participated in the National Debt Repayment Movement. Until 1911, he served as a permanent member of the standing committee of the Korea Chamber of Commerce and Industry and contributed to promoting the rights of merchants and business growth. When Emperor Gojong and Sunjong died, he led a merchants’ group to mourn at the national funerals.

Maeheon demanded cleanliness and tidiness both at home and at his shop. Despite his staunch thriftiness, he wasn’t stingy with others. Rather than exercising his authority, he prioritized tolerance and harmony. According to the Monthly Chosun publication titled “Pioneers of Korean Capitalism,” Maeheon treated hungry beggars as guests, preparing breakfasts for them every morning and giving out cotton-stuffed pants and jackets during the winter.

“Like Park Too-pyung,” a publication of the Federation of Korean Industries, introduces a story of Jeong learning how to make the powder from a cousin who was a grandmother. Bakgabun was offered as a complimentary gift to cotton customers. Owing to the unexpectedly positive reaction from female consumers, Yeongang began selling Bakgabun. The powder was a big hit until 1930, when it was found to contain lead and production was halted. Learning a lesson about the potential of women from his mother, Yeongang hired more female employees to work at Park Seung-jik Shop.

The first thing each morning, Maeheon went for a walk around Dongdaemun Market. He bought cheap vegetables, fruit and fish, and taught his daughter-in-law how to cook. For his birthday, he left for hot springs or mountains rather than having a party.

In the wake of depression after the First World War, Maeheon experienced some hardships. He turned his shop into a corporation in 1925 and became its president. In 1946, he renamed his company Doosan Sanghoe (meaning store in Korean). The name Doosan came from his son’s name, Too-pyung, and san, which means mountain. The name of the company literally means “grow as a mountain.” Too-pyung inherited the company and his father’s assets after Maeheon died on Dec. 20, 1950, at the age of 86. He was buried at Seonyeong in Gwangju, Gyeonggi. 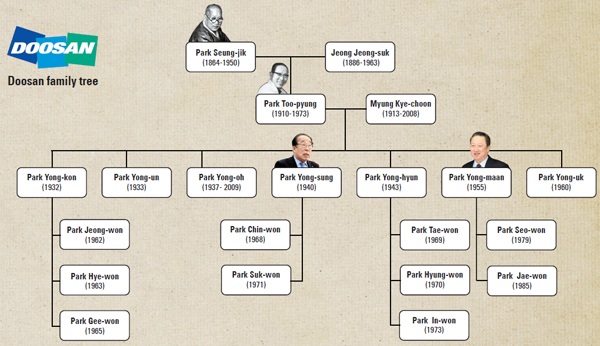 Yeongang was born Oct. 6, 1910, in Jongno, Seoul. He was the seventh child of Maeheon, who had six older daughters, but oldest of four sons. Two sons died at an early age, and Yeongang and the youngest son, Woo-byung, were able to help the company. Yeongang’s father and mother were devout Christians and close friends of Pastor Ham Tae-yeong of Yeondong Church.

Unlike his father, who had a tough childhood, Yeongang was born the son of a business mogul. At the age of 6, he went to Gyeongseong Kindergarten, where Princess Deokhye attended. His father sent him to Dongdaemun Shimsang Primary School, a six-year Japanese school, saying “You should know the Japanese to win them.” Yeongang was a quiet child. He always seemed preoccupied because he was keenly interested in observing things. He rarely joined his friends outside of school.

After graduating from the primary school, he went to Gyeongseong Middle School and Gyeongseong Commercial High School. Yeongang married Myung Kye-chun, a daughter of Myung Tae-sun, owner of fabric shop in Seorin-dong, in May 1931 before his high school graduation. Yeongang proposed to her after falling in love as he saw her in a tennis match. Her older brother was Myung Kye-wan, who was dean of the Medical School of Seoul National University.

Yeongang entered the Bank of Joseon in 1932. Competition was fierce to get a job in the calculation department at the bank headquarters, but it wasn’t a powerful department. His job was to match thousands of payment-received slips and put stamps on them. He had to work until midnight at the end of the year. Workloads were significant, but he learned the overall operation process of the bank.

Yeongang was friends with colleague Park Ju-hee, who later became a member of the Bank of Korea’s Monetary Policy Committee, but hated calculating. Born in Daegu, Park was engaged in student movements and determined to take part in independence movements. She applied to be transferred to the bank’s Shanghai branch in order to make contacts with Korea’s interim government there. But her plan was disrupted by her father’s sickness. Park was unable to focus on her calculation job in Seoul and made frequent mistakes. Yeongang had to review her work and make corrections all the time.

Yeongang’s network of colleagues at the bank, including Park, affected his business activities pretty significantly. One of his superiors, Koo Yong-seo, became governor of the Bank of Korea. Another superior, An Myeong-hwan, became president of the Commercial Bank of Korea. Other colleagues included Chang Ki-young, deputy governor of the Bank of Korea and minister of the Economic Planning Bureau; Baek Du-jin, prime minister; and Kim Yeong-chan, minister of commerce.

Yeongang quit the bank to help at his father’s business in 1936. Starting out with cleaning the shop, he learned how to do all the chores. After that, he worked as an executive. At the time, the shop had about 30 employees and was one of biggest fabric stores in Seoul. Yeongang tried to turn the shop into a modern company. To improve efficiency, he made timecards and compensated employees using performance incentives.

After the country’s liberation, Yeongang acquired Kirin Brewery Company, created by a Japanese businessman, and renamed it Oriental Brewery. His father was one of two Korean shareholders in the Japanese company. After the acquisition, Yeongang rebuilt its plant in Yeongdeungpo, which was destroyed during wartime, and resumed production of beer in August 1953. Sales reached just half of its rival, Joseon Beer, formerly known as Japan Beer Brewery, which accounted for as much as 70 percent of the local market. Oriental Brewery was seriously hurt by the war.

Based on the success of the beer company, Yeongang expanded his business by establishing Dongsan Construction, Hanyang Oriental Food Market and Yoonhan Industry, and acquiring Korea Glass, all of which were important in the founding of Doosan Group.

In 1963, he took over Hapdong News Agency and jumped into the media industry. In 1967, Yeongang was elected chairman of the Korea Chamber of Commerce and Industry. His third son, Yong-sung, also served as the chairman, and his fifth son, Yong-maan, is the current chairman. Yeongang died of lung cancer on Aug. 4, 1973. He also was buried in Seonyeong, Gwangju. He had six sons and a daughter.

[Dynasty Korea’s corporate roots] For Hyundai founder, no challenge was too big