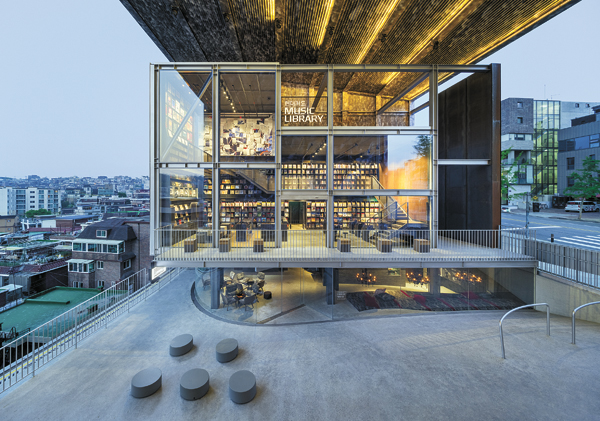 A couple of years ago, word began to spread among ardent fans of legendary international musicians that several Koreans were traveling the globe, sweeping up the most limited-edition records in existence.

They managed to obtain six of the world’s rarest vinyl LPs, including the 1977 track “God Save the Queen” by the Sex Pistols - only 10 of which still survive today - and The Beatles’ controversial “butcher cover” of the 1966 album “Yesterday and Today.”

The first edition of the record, showing the band posing with severed dolls heads, was discontinued as it was deemed too disturbing.

The Korean collectors also got their hands on The Rolling Stones’ “A Special Radio Promotion Album in Limited Edition” (1969), one of only 200 copies released.

These treasures are all housed in Hyundai Card’s new “Music Library + Understage,” which is set to open to the public from Friday. This unique modern building in Hannam-dong, central Seoul, is the third part of the company’s “library project” following the opening of its Design Library in Gahoe-dong in 2013 and its Travel Library in Cheongdam-dong last year.

“Through the Music Library and Understage, we wanted to provide Koreans with a valuable opportunity to experience a diverse range of masterpieces of music,” said Lee Mee-young, vice president of Hyundai Card’s brand division.

Hyundai Card has been organizing its ‘Super Concert’ project, inviting legendary artists to Korea such as Paul McCartney, who performed here last month, but the company wanted to offer more people a space where they can appreciate and enjoy music in more depth and time rather than just at a one-night event, Lee explained.

While the top two floors of the structure house records and various books from the 1950s to modern times, the basement is dedicated to performance venue Understage.

Six record players are located in the music library for visitors to pick music of their choice to play or request a song to the DJ.

“Hyundai Card has been operating a digital music channel called ‘Hyundai Card Music’ in efforts to help musicians who suffer from the current profit-sharing system of digital music, which is unfavorable to artists, while introducing diverse genres of music to Koreans,” said Lee. 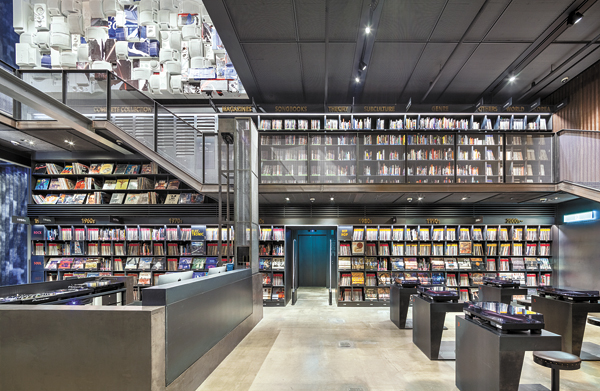 The Music Library houses more than 10,000 vinyl records, including about 26 that are extremely rare, and 3,000 related books, which were collected from across the world over two years. Visitors can listen to the music of their choice on the six LP players at the venue or request a song to the DJ. Provided by the company

“Our system allowed artists to take 80 percent of the profits. But while operating for a few years, we realized the consumption of music in Korea leans too much towards K-pop idol groups’ music.”

As a result, Lee said, the service will be terminated from this month.

Instead, Hyundai Card took its expertise offline. It will offer Understage to the country’s indie bands and underground musicians, who have limited access to professional stages.

Indie rock band Daybreak, who performed at Understage during the press conference introducing the venue on Tuesday, said it is an honor to perform on such a state-of-the-art stage with a great sound system and the newest instruments.

Architect Choi Moon-gyu, who is also a professor at Yonsei University, worked on the architecture of Music Library + Understage. The interior was designed by Gensler, an architectural firm, in collaboration with various international artists.

Choi designed a small area reminiscent of a container box, which extends from the building’s rooftop, for the library space, leaving the rest of the venue open.

“The full area has been used for Understage, however, I left a lot of space on the ground floor to give an open-air space where visitors and passersby can take a refreshing breather and enjoy good music,” said Choi, known for designing the unique Ssamji-gil shopping center in Insa-dong.

“Like music can be shared with different kinds of people across the globe, I hope this space is used by diverse people, including those who want to get some inspiration from music or those who want to enjoy a bottle of beer while watching the sunset in the open space while listening to some good music.”

The architect added that he installed a roof over the top of this open space so that people can also enjoy listening to the raindrops.

Hyundai Card’s Music Library + Understage opens on Friday with an homage concert by the Kim Chang-wan Band, followed by guitarist Shin Joong-hyun’s performance on Saturday with rock star Jeon In-kwon performing on Sunday. The concerts are standing only and tickets cost 11,000 won. Hyundai Card holders get a 20 percent discount. 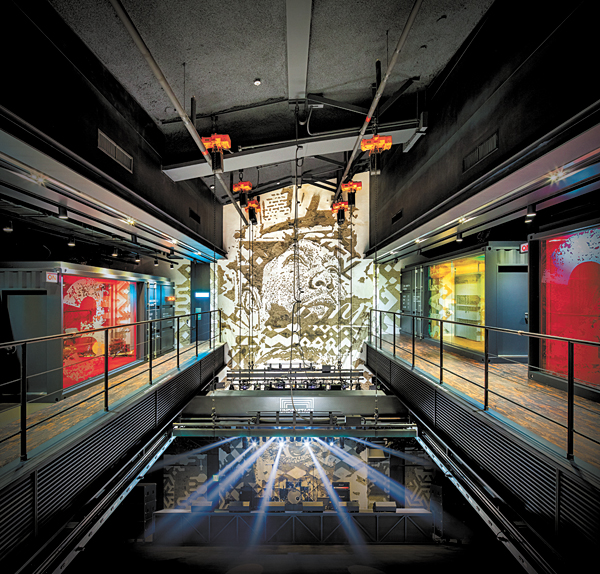 The upper floor of Understage, a performance area in the underground of the building. The interior was designed by architecture firm Gensler, which collaborated with international artists such as Vhils and JR.Provided by the company

The Music Library opens from noon to 9 p.m. on Tuesdays to Saturdays and at 11 a.m. to 6 p.m. on Sundays. It closes on Mondays. The library is for Hyundai Card holders only, including those with check cards. Members can bring two guests and can visit the library eight times a year for free. For more information, visit library.hyundaicard.com/music.