Jeonse and the fading of middle-class security

Jeonse and the fading of middle-class security 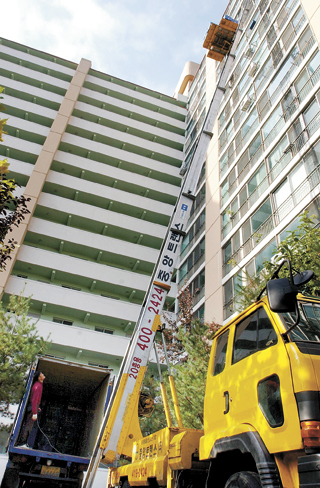 Just walking into the unit in the Shibeom Apartment complex in Yeouido-dong, western Seoul, was enough to bring on despair.

The 24-pyeong (854-square-foot) unit had only two rooms: a living room connected to a small kitchen and bathroom. The balcony was gone: The owner had extended the living room. There was no storage area to install a washing machine: It was placed on top of the bathtub instead. As with many aging apartments in Yeouido, the 46-year-old apartment building is notorious for ants, cockroaches and rusty hot water.

Its jeonse price, however, was more than the average selling price of an apartment in Seoul. According to the Korea Appraisal Board, the jeonse price for 24-pyeong Shibeom units has skyrocketed to nearly 300 million won ($274,000), and some newly renovated units rent for 400 million won. That accounts for more than half of its purchase price, which is around 600 million won.

Built in 1971, Yeouido’s largest apartment complex, located next to the landmark 63 Building, is one of Korea’s original apartment complexes. Shibeom means “test” in Korean. President Chun Doo Hwan ordered local private builders to construct the first modern-style residential apartments in Yeouido, then a sandy, deserted airfield for the Air Force, as part of a test to boost the real estate market in the capital. 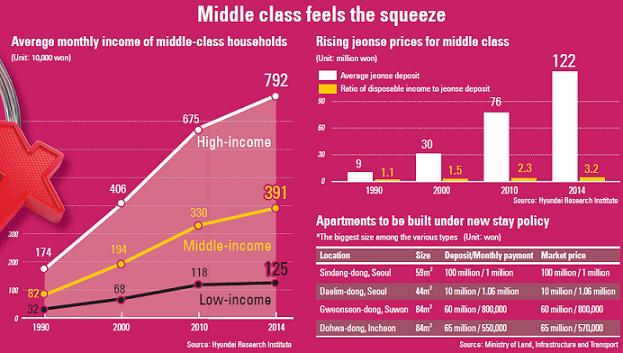 Like other aging apartment buildings waiting for redevelopment, the apartments in Yeouido are old but expensive with few advantages except a prime location in the business district.

Despite the high cost, real estate brokers told me they had no available units to rent out on jeonse.

“Due to the rising jeonse prices, most tenants are renewing their two-year contracts,” said a real estate broker. “Although the owners ask for more money for the renewal, the tenants found it easier to pay additional up because they know it is even harder to find an affordable jeonse deal now.”

Statistics show that an increasing number of people in Seoul are deciding not to move and renew their jeonse leases.

A survey released by the Seoul city government on May 18 showed that the rate of Seoul citizens who said they had plans to move within the next five years dropped from 41.5 percent in 2007 to 24.2 percent in 2014.

Many real estate brokers in Yeouido recommended I go for a regular monthly rental or even purchase a new unit rather than paying the surging jeonse prices.

They said an increasing number of owners are choosing so-called “half-jeonse” rentals, in which tenants pays a lump-sum deposit smaller than the traditional jeonse amount plus a monthly payment of about 200,000 to 300,000 won.

“Due to the low interest rates, owners prefer monthly rental payments rather than putting jeonse into a bank account to earn interest,” said another broker. “Also, as the media is continuously reporting the spike in jeonse prices, owners are prompted to raise their jeonse prices.”

In Sillim-dong or Bongcheon-dong, known for relatively cheaper housing, jeonse prices were even higher than those in Yeouido, as most of the apartments there are larger.

“The minimum jeonse price is 280 million won,” a real estate broker based in Sillim-dong said. “There are a few small-sized apartments around here but most are more than 20 pyeong.”

According to Seoul city data, the average selling price of a residential apartment in Seoul is about 300 million won. Given the fact that the average income of Korean men, who are the primary breadwinners in Korea, is currently about 37 million won, that means a person would have to save his monthly salary for at least 10 years to rent a jeonse apartment in the capital without borrowing.

As jeonse prices surge, an increasing number of people in the middle class say they feel the quality of their lives is deteriorating.

According to a report by the Hyundai Research Institute titled “Quality of Life of Korea’s Middle Class,” the monthly income of Korea’s middle class rose an average 6.7 percent annually between 1990 and 2014, from 816,000 won per household in 1990 to 3.9 million won in 2014.

The growth in income for the middle class was higher than the growth in the low-income bracket, 5.9 percent, and also that of the upper class, which was 6.5 percent.

But despite the increase in incomes, the rising costs of housing and private schools or cram schools for children led to a deterioration in the quality of life of middle-class people, the report said.

Jeonse deposits paid by middle-class people showed even sharper growth, climbing 12.1 percent annually on average during the same period, from 8.9 million won in 1990 to 122 million won in 2014.

The report said middle-class families in Korea would have to save their monthly incomes without spending on anything else for 3.2 years on average to rent a house on jeonse.

The report says along with a spike in the cost of private education, skyrocketing jeonse deposits are a major factor in the deterioration of middle-class lives.

“The government should ease the burdens of jeonse and monthly rental payments by middle-class people by expanding state-run rental housing and improving conditions for jeonse loans,” the report said.

The Ministry of Land, Infrastructure and Transport announced on May 14 an ambitious policy dubbed “new stay” to help middle-class people struggling with jeonse prices.

The scheme aims to build residential apartments for about 5,500 households on four plots of state-owned land, two in Seoul, one in Incheon and the other in Suwon, Gyeonggi. All are close to subway stations.

The state-owned land will be sold to private builders, who will construct the apartment buildings. But the monthly rentals will be controlled by the government and restricted to increases of 5 percent annually. Tenants can reside in the new stay houses for eight years starting in 2017.

The houses are basically monthly rentals, although there is a small deposit.

Authorities expect the new stay houses to attract many middle-class people living in jeonse rentals and ease competition in the jeonse market.

Also, critics say the monthly rental payment is too high even for middle-class people, although the government said it is a bit cheaper than market prices in the areas.

Historically low interest rates have dragged down the lending rates at local banks, enabling more tenants to borrow for a jeonse deposit.

Given the fact that most local banks in Korea now are offering between 3 percent and 4.0 percent for annual lending rates, it would cost less than 400,000 won for monthly interest on a 200 million won jeonse loan, which is less than the new stay apartments’ monthly rental fee.

“Considering taxes and other management fees, which average 200,000 won for each house in Seoul and Gyeonggi, the monthly fee for new stay houses is expected to surpass 1 million won,” said Choi Seung-sub, a member of Citizens’ Coalition for Economic Justice, an NGO supervising state-run real estate policies. “It is also a burden for middle-class people who earn monthly incomes of less than 6 million won, as it would cut into their savings a lot.